Third in our four part series on DCUC10, this review covers Joker, Forager, and Batman. 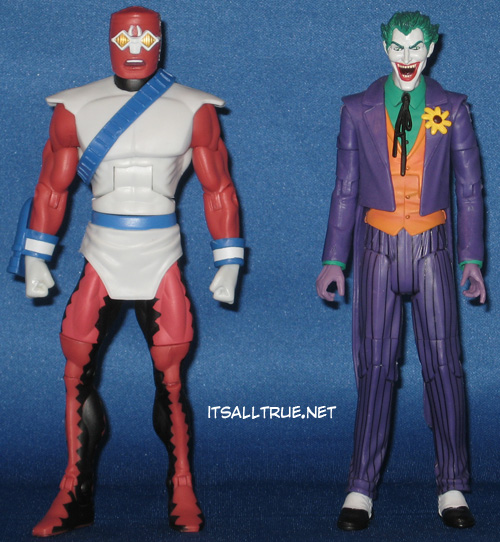 I didn’t expect Forager. Cosmic Odyssey is a trade I’ve never properly read (Hey, I was 8 when it came out!). I know of him, but have never read a comic that featured him, since Cosmic Odyssey was kinda sorta the last one. Still, I knew who he was when his named leaked and I was cool with it. He’ll fill out the ranks, right? When I got the figure, my excitement was drained by a QC problem I’d never encountered before: his head was glued to the plastic insert. That’s just dumb. Truthfully, I could tell this from the package, but even though I’m still confident DCUC10 will be more plentiful, it might be the only Forager I ever find, so I picked it up. The glue from his goggles was over applied and Forager had a chance to bond with the insert. I’ve been able to remove a lot of the excess plastic since taking the -photo below, but the head isn’t in the best shape on that side. It’s a luck-of-the-draw quibble, but it did detract from my enjoyment a bit. 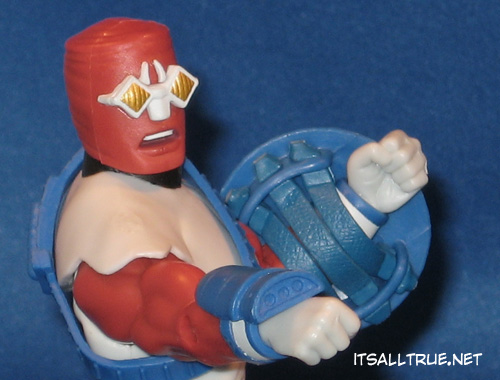 Forager makes good use of a buck body. They’ve added all the right details to make him spot-on. His new pieces include the bottom of his tunic, a bandolier, glove cuffs (and his wrist blaster), a new softer plastic piece for the top of his tunic, and his head. The standard articulation is there, and there is some moderate up/down movement to the head. (I’m starting to forget older DCUC figures could look up and down though). All the pieces are sharp and the soft good upper torso fits really seamlessly with the buck torso underneath. I love his head sculpt (it’s spot-on to his first appearance), but mine looks like he’s going, “there’s something on my head! get it off! get it off!”. Again, luck-of-the-draw. 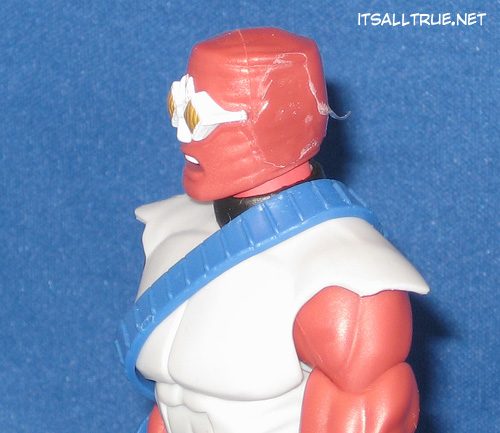 Some of the best DCUC figures are ones where the pieces were molded the right color. Power Girl, Robotman, and Forager all look sharp because of molded colors. He does have some paint, some crisp blue lines on his uniform, his goggles, and the amazingly well done pattern on his tights. Virtually, no slop on that semi-difficult detail.

Forager also includes his trademark shield. Similar to Guardian, it has some textured soft good straps. It fits over his arm easily and stays snug. You can’t ask more from a shield. 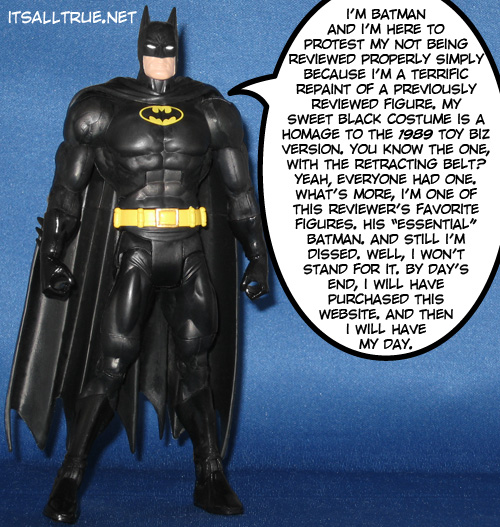 I forgot to put them in the picture, but Batman does include a “Bat-Laptop” (??) and a batarang – both in metallic blue.

I may not have been paying attention to Cosmic Odyssey, but I am a Super Powers kid. So you can imagine, this Joker is damn near perfect in my eyes. The 4H didn’t try to recreate the Super Powers Joker, but instead aimed to make a figure of the Joker the Super Powers figure was trying to be. It was a great choice and they nailed it. 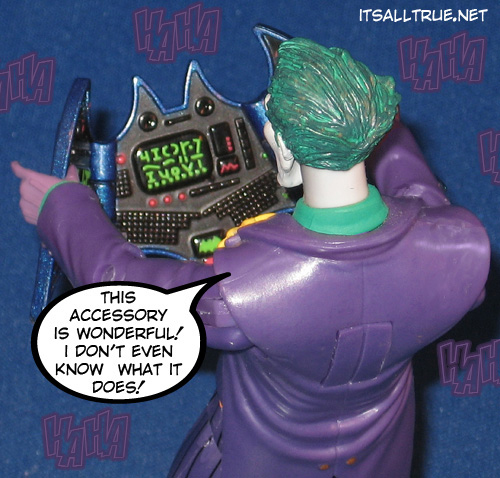 Joker shares his body with the Gentlemen Ghost, but I don’t really associate the two in my mind. The Joker figure looks appropriately tall and gaunt whereas the cloak on Ghost helped give him bulk. Even side by side, they don’t look similar enough to be simple repaints.

There are some new parts of course. The 4H left the lapel spot as a separate piece so they could switch out character specific parts. The lower forearms are now cuffless and the neck/collar assembly has been replaced. That’s probably the only drawback to the body reuse – a gummy post has to hold Joker’s head into the empty socket. Joker has the same lack of head articulation as most DCUC9/DCUC10 figures, but his is made a little more awkward by the rubber neck. But I’m sure if the up/down articulation was there, I wouldn’t even mention it. And atop that neck? A great head sculpt. Joker’s having a good time on your toy shelf and you’ll know it every time you look at him.

Paint is obviously the area where Joker deviates from his prepaint. He’s molded almost entirely in purple, but the yellow, orange, and green areas are all painted well. Even the two buttons above his coattails have paint apps. And the main area where things could go wrong is instead an impressive selling point. The pinstripes on the pants are straight all around the figure. 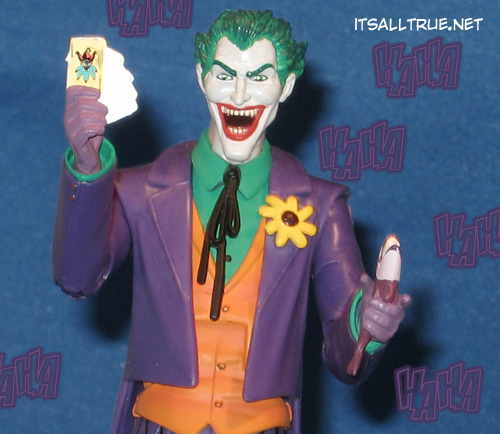 Joker’s got serious accessories. He features his classic cane, a hand of playing cards, a laughing fish, and his Super Powers mallet. The cards end up at the low-end because only the Joker card has a tampo and the rest are blank, but it’s still cool to have. His cane is sculpted and painted well for those looking for comic accurate accessories. The well-painted laughing fish would be my favorite, but I love that mallet. It looks perfect. From the J on the top, to the face and long nose, it’s an excellent recreation. My only one complaint, and it’s not really a good one, is that the mallet has a full bottom and I can’t put it over Joker’s head. I know it’s silly, but I did that all the time as a kid. It was awesome. 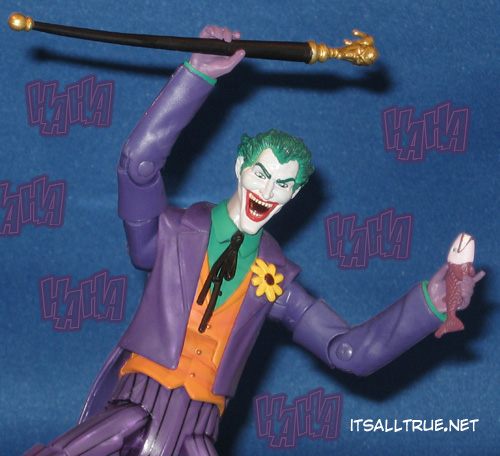 Overall, Forager is a good figure that I like despite being ambivalent about when he was announced. The new chest piece really impresses me when I think about similar pieces on future figures. It really expands the buck’s possibilities. I like the expression on his face, even if it’s been hijacked by some errant glue. I guess the biggest praise here is the figure makes me want to read Cosmic Odyssey.

It may have taken ten waves to get the Joker, but it was well worth the wait. He’s perfectly done from head-to-toe. He’s so perfect, that I’d love to see Mattel revisit Penguin with Super Powers accurate colors (primary color umbrella!). I can’t help it. I love Super Powers and this figure recaptures that excitement fully. Excellent figure. 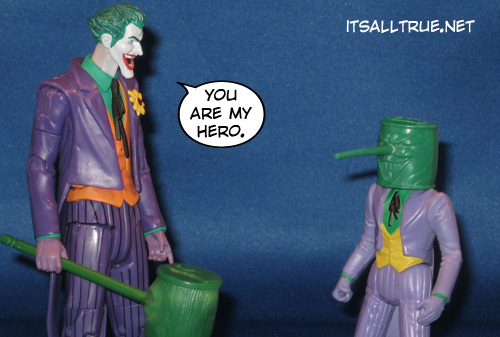