Third in our five-part series featuring the ninth wave of DC Universe Classics, this review covers Mantis and his variant, Mantis. 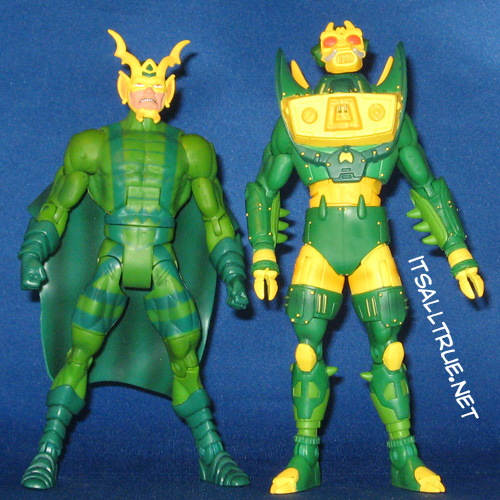 These two figures are comprised of the same basic parts. It’s obvious from afar that the Classic Mantis features the standard buck body with a new head, and new lower arms and legs (which all conveniently hook into his super-flexible cape). But what it not so obvious, is that the Super Power Mantis is also built around the same buck. SP Mantis also features unique lower arms and legs, but the rest of the look is accomplished with add-on pieces. There is the chest armor, the pelvic armor, two thigh guards, and another piece of plastic over the ab crunch to smooth the figure out. These few highly-detailed pieces transform the whole figure and make it a perfect update of the classic Super Powers version. Simply put, he’s a work of genius. Even if you’re not interested in the Super Powers themed versions in this line, you should still appreciate the planning and execution that went into this version of Mantis.

Classic Mantis has a great head sculpt with the bright yellow paints that makes him really standout. The unique face sculpt is really appreciated here. There’s just something about it that really sets it apart from the others and that’s important. Particularly on a figure like Mantis, where the headsculpt has to do most of the heavy lifting. As the line grows, unique headsculpts like this will really help compensate for the body reuse. I should also take a moment to thank Vault for loaning me his Mantis for this review. Mantis is currently the one DCUC9 figure I’ve yet to run across. 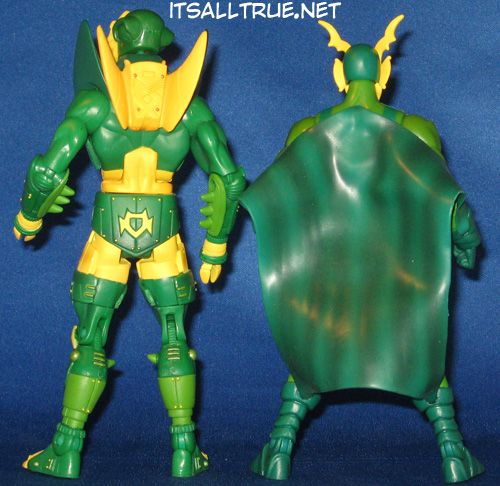 These figures are somewhat night and day when it comes to paint apps. Classic Mantis just needed a few sharp green lines to finish out the detailing on his costume, but he also sports some dark green/black lines to bring out the details in his gauntlets/boots and to provide some variety to his cape. All of these lines are done well.

Super Powers Mantis is reliant on paint apps. In addition to the green/yellow contrast of his overall costume, Mantis is appropriately covered in bolts. Most of these went on cleanly, but you might keep an eye out since the number of apps increases the likelihood that there will be slop. 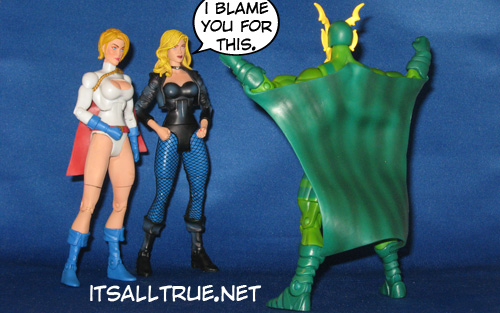 There’s no accessories for these two figures, but the cape on Classic Mantis is a standout piece. One of the problems with early DC Classics, and some more recent ones, is the bulky cape. There’s a couple where the ab crunch can’t hold the figure forward because of the weight of the cape. There are others where the cape juts away from the figure and they need extra clearance behind them on the shelf. For those figures, it’d be interesting to see some of the capes molded in this more flexible plastic. It’s a little awkward on Mantis since putting his arms down makes it bunch up a little, but we think it might work nicely on some of the figures instead of the thick folded capes. 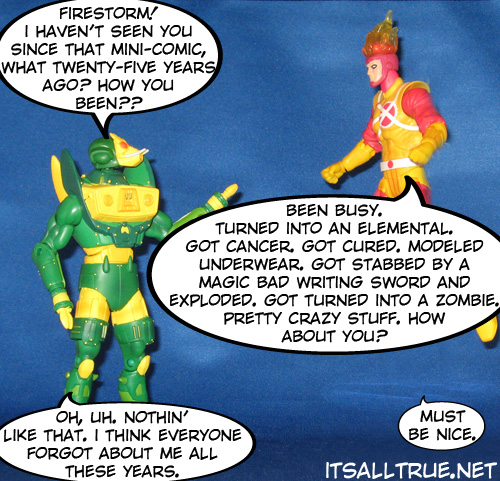 Overall, Mantis and his variant are good pieces in a sleeper wave. If you’re a big Super Powers fan, you can’t ask for a nicer update than the Mantis. If you prefer Kirby’s classic versions of the New Gods, this wave takes care of you as well. You may not put either Mantis towards the front of your display, but both figures are worthy of the spotlight.

37 thoughts on “ItsAllTrueReview:
Mantis and Mantis”