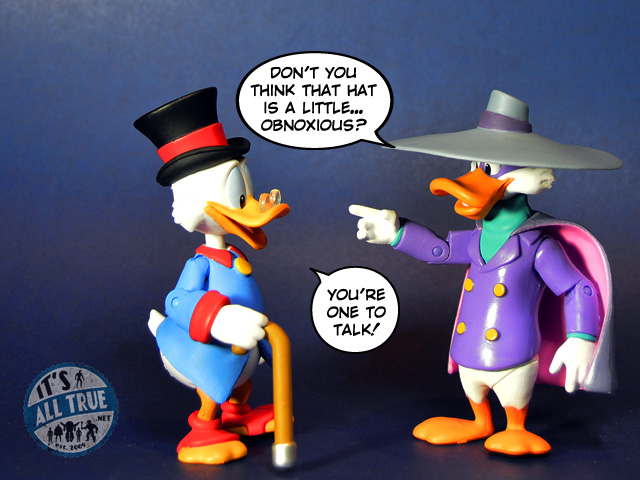 I love superheroes, I really do. Looking at my toy collection makes that pretty clear. But one thing superheroes seemingly lack more and more as I’ve gotten older is a distinct and well-rounded life in their secret identity. It’s really part of maintaining the status quo, I suppose. Superman can punch out Brainiac ad nauseam and we don’t blink an eye, but how many times can we read about him surviving a parent teacher conference? (I’d at least like to find out…)

When I think back to Darkwing Duck, I don’t think of him as the shadowy guardian and crime fighter so much as that he was a great Dad. The show was fantastic, the villains roster solid, Launchpad is still one of my favorite characters, and Gizmoduck is a sensation to himself. And yet, it was Gosalyn and her relationship with Drake that truly made the show work for me. To this day, I will drink up comics that show strong family lives because of great shows like Darkwing Duck ( though, admittedly, I also save a lot of money this way).

Funko’s Darkwing Duck figure has me thinking about that relationship because the figure is so happy. He’s also kinda looking down so I just see him taken from a moment talking to Gosalyn versus say, getting dangerous. It’s a terrific sculpt and the expression leaves me recalling my favorite parts of the show.

The rest of sculpt is great; the whole first wave just looks like animation in real life. Darkwing stands about the same height as Scrooge, has a great paint, and features ball-jointed shoulders, hinged elbows, and swivels at the waist, neck, and v-crotch hips. The soft cape looks sharp as does the ginormous hat. The traditional gas gun is also included. Continue to Page 2…