If you’ve been waiting for the Chemo review, well, it’s going to be a little longer. DCUC10 has arrived and we’re going to pair Chemo up with his C&C counterpart, Imperiex. But first, we’ll check out the rest of the wave ten lineup. First up, Power Girl and Man-Bat. 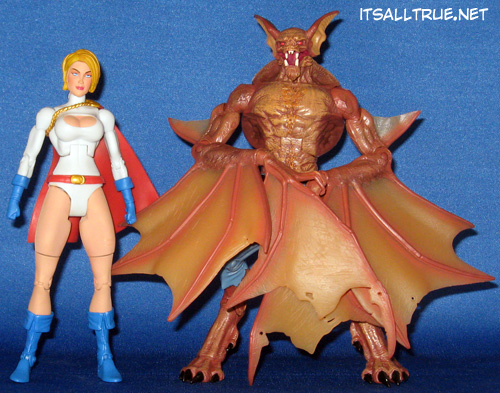 Power Girl is a nice figure in a wave of nice figures. She reuses a lot of Black Canary parts (the ab torso through the upper calf), but has plenty of new parts too. The new cuffed boots and gloves (the arms look to be completely new) are well done and we’ll undoubtedly be seeing them again. She also sports a new head sculpt that is on par with the wonderful DCD one from a few years back, a new belt, and a new cape. And of course, she has her unique torso that Mattel thought best to obscure in the package by having her face completely to the left with an arm up. Pretty funny stuff. All the new pieces work together for a great figure. The standard articulation is there, even the hinged hips, though the hinge is hidden in the leg (like Wonder Woman).

Technically, Man-Bat is a straight repaint of the 2007 SDCC Exclusive Man-Bat. When Man-Bat was first shown as a 2up, he was in a brown deco. When the line got shuffled around and Man-Bat became an SDCC exclusive, he’d turned white. I’m not sure why they went with the albino deco, but that was how he was featured on “The Batman” cartoon at the time. It made for a cool figure, but there’s been fan outcry for the brown ever since. This version uses all the same parts and features mostly standard articulation: ball shoulders, wrists and head, hinges at the elbows, hips, knees, and ankles, swivels at the waist and bicep, and the ab crunch. All the joints work well, though the figures arms are made of the same gummy plastic as the original to keep the wings flexible. 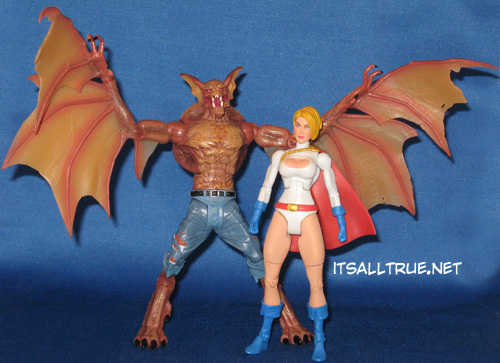 The Power Girl in this review was painted very well. Her colors are crisp because they’re mostly solid colors on each individual part. Still, the few paints app present are good ones. The one thing to watch for is her hands and thighs. On the two I’ve seen, the blue from the fists easily scuffs up the legs. You can’t see it in the images, but she’s already ended up with thin blue lines on her legs. It’s a little irritating.

Like Power Girl, Man-Bat is mostly molded in the right colors, but his arms were molded in a translucent plastic then painted to match the body. This makes for a cool effect with his wings. You can’t see through them per se, but you can seem some light through them, which makes for some creepy poses. He also has paint apps for his eyes, mouth, toes, belt, and the tears in his pants. All the apps on this figure were nice and crisp. 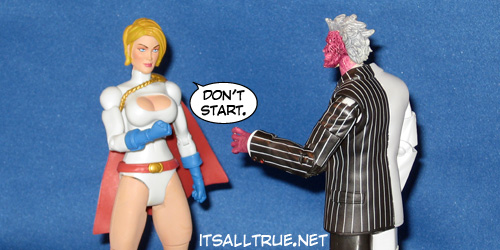 No accessories for these two, but Man-Bat is a massive figure made up of unique tooling (from those pre-buck, DCSH days).

Overall, these are two figures that should be in any DC Classics collection. We’re hoping this Wal-Mart exclusive wave filters out to more locations than the last one. DCUC5 was great, but some of the figures wouldn’t be missing from a proper DC collection and had some issues to boot. That’s not the case with these figures. Both of them are high profile enough that they’d be missing in any group shot and both are done well when you get them. Two front-of-shelfers for sure. 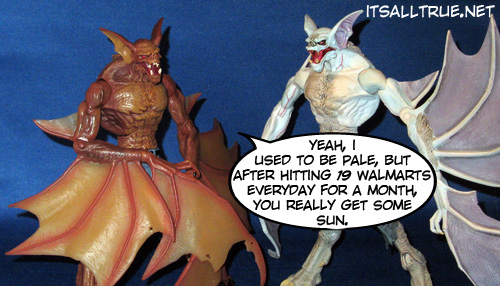