Second in our four part series on DCUC10, this review covers Robotman and Beast Boy.

DCUC10’s lineup was released (leaked?) over a period of a few months. We knew it would have Joker. We were pretty sure it would have Man-Bat. AFI let us know about Power Girl. We knew Forager was coming, but we weren’t sure which wave. We guessed (correctly) that there would be a Batman. But for the last two? Well, once Mattel confirmed a 7 figure lineup, one guess was as good as any other.

When the news broke about Robotman and Beast Boy, I had mixed feelings. Robotman (& the original Doom Patrol) are some of my favorite DC Characters. I was ecstatic about getting a Robotman and the figure I purchased didn’t let me down. I wasn’t sure about Beast Boy though. And it was because I didn’t know what version I wanted. I didn’t know what size he would be. I had a lot of reservations about how the figure would be done and Mattel may not have made the best choices with him. 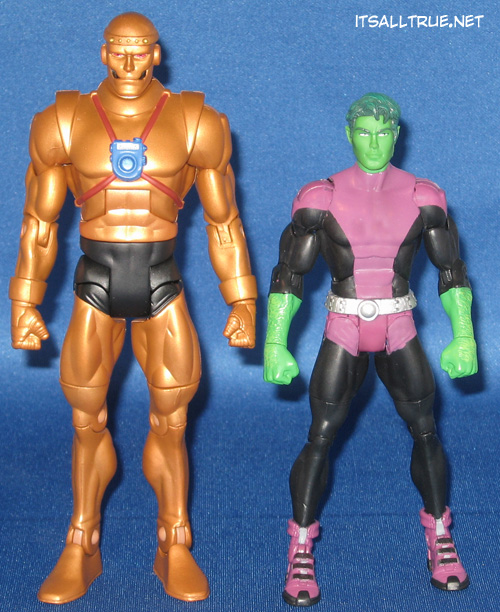 Robotman is based on the Superman Blue buck. He features a new torso, new forearms, new hands, and a new head. He also has a great bonus – the top of his head comes off to reveal his human brain. That wasn’t something I was expecting, but I really appreciate 4H/Mattel going the extra mile. All the new pieces are sculpted great – this is the quintessential Robotman toy. I was tempted to pick up the JLU version, but now that I have this, there’s no need.

Because he’s mostly a buck body, Cliff sports the standard articulation of a DCUC figure. Like most of the current offerings, the up and down head motion is blocked, leaving only side-to-side movement. This is an issue that Mattel really needs to take look at on whatever wave they’re working on right now.

Another thing that makes this figure look sharp is that he has the benefit of being molded in the right colors. He has a metallic copper sheen that really makes the figure pop. And best of all, he needs very little paint to sell the look. The apps he does have, on the face, the control harness, and the top of legs, are all crisp and make for one of my favorite DCUC figures.

The only thing this Robotman is missing? Negative Man, Elastic-Girl, and the Chief. Hopefully, we’ll be seeing all those figures sooner than later 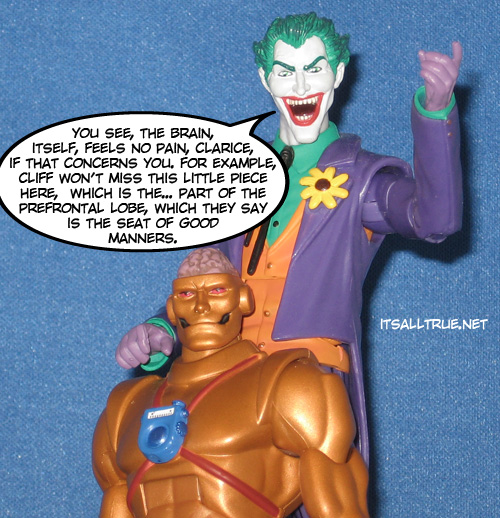 Beast Boy has had a handful of costumes over the years. He’s also been two different colors. It’s safe to say there was some room for interpretation when Mattel decided to do a figure of him. One costume I didn’t expect was the costume from the Teen Titans cartoon though. Now, Gar did wear this in the comics from 2006 to 2008 or so. And, truthfully, I’m okay with this look. The problem with it is that it doesn’t fit the size of the figure.

Right up front, I should say I’m not a fan of this small buck. I think it’s fine if used appropriately, but so far it really hasn’t been. This buck works for Kid Flash only as long as Mattel intends to make the rest of the sixties Teen Titans – I don’t think they will. It doesn’t work for Robin because he was well into his teens when he wore the all red costume. That’s the same problem facing Beast Boy, when he wore this costume, he was too old to be this small. Now, Gar is a short character and he should have had a shorter buck (whatever happened to that Sinestro buck?). Overall, Mattel needs to really assess what they’re overall plan is for the shorter characters. This buck should be reserved for the really young heroes only and not short characters. And the Sinestro buck needs to see some re-use for the older teen characters.

Despite my issues on the size, the figure is still well executed. He has a great head sculpt, a new belt, new forearms/hands, and new calves/boots. The details of this version of Beast Boy’s costume are all captured here. The belt was glued on crooked, but that’s a minor issue.

Beast Boy scores well in the paint department too. His hair is a separate molded piece, making for crisp lines there. The figure has crisp lines overall and the highlighting on the arms helps sell the “hair” sculpted underneath. 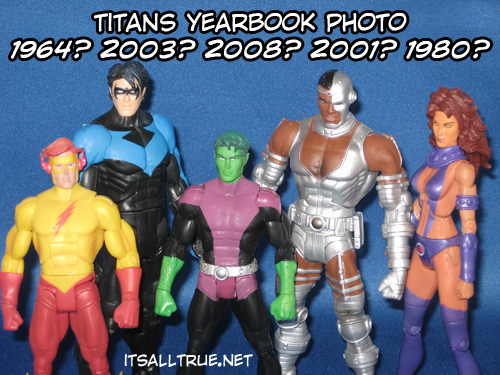 I hope you like eagles because if your collecting both DC Classics and MOTU Classics, you’re going to end up with a bunch of them. Beast Boy comes packaged with a green version of the Wonder Twins eagle. It’s a welcome accessory and makes sense for him (since it is him). The eagle was painted well on the talons, head, and tail. The only gripe is that the wings were really deformed by the packaging and straightening them out has been a pain.

Overall, Beast Boy is a solid figure by himself. His only draws back is the same thing that afflicts rest of the Titans: it’s hard to fit them into a timeframe where you can make one team. Beast Boy doubles that problem by being NTT size in a modern costume. Mattel really needs to look at the Titans and aim to make at least one whole version of the team. Beast Boy is a middle shelfer, mostly because he can’t really appease any one portion of the Titans fanbase.

Robotman is just a great figure. All the parts of his production have come together and made a perfect version. I do wish his head had head up and down movement, but that issue is not limited to this figure. He’s going in the front of my display, where I happily await the rest of the Doom Patrol to go with him.