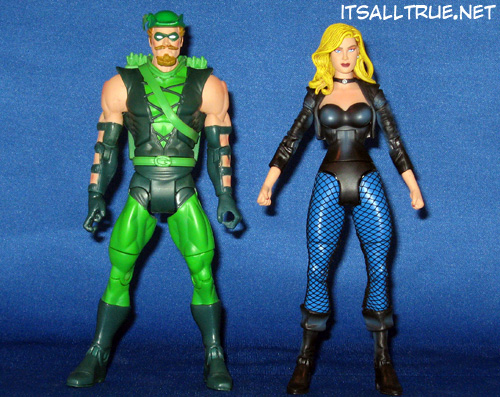 While the buck system allows the overall DCUC line to grow and expand, it’s not without drawbacks. A lot of the figures end up looking the same if their paint colors overlap. Some details go missing or paint has to stand in when the budget doesn’t allow for a new piece. But that’s not the case with these figures. They’re both full of new parts.

From the waist up, except for the shoulders, Green Arrow is an all-new figure. And because of that, he is easily one of the best sculpts in the line so far. He has raised boots courtesy of Dr. Fate, but all his other details, his trademark “G” belt, gloves, laced doublet, collar, and quiver w/ strap, were sculpted just for him and they look great. And, of course, there’s the all-new head. The detailing in the beard and on the feather is superb. And maybe it’s just us, but Ollie looks a little annoyed and we love it. The Four Horsemen really outdid themselves on this figure.

Black Canary is an all-new figure. In terms of sculpt the figure scores really well. Her head and hair are sculpted great. The jacket pieces are heavily detailed for a nice touch by the Four Horsemen. Her torso shows a little collarbone and has her choker necklace for added detail and, best of all, doesn’t suffer from Starfire’s “uniboob”. We also get the first pair of women’s cuffed boots to… boot. The fishnets are real and look great from the front, okay from the back. Our only complaint on the sculpt here is the tiny hands. We’re not ready to say she can’t eat at Burger King because the DCUC females all seem a little off (we blame the ab-crunch joint). The hands would probably look better if they were a little bigger. Better than that, she could have an open hand to hold accessories. That’s an overall line problem though. Too many of the figures are given two fists. 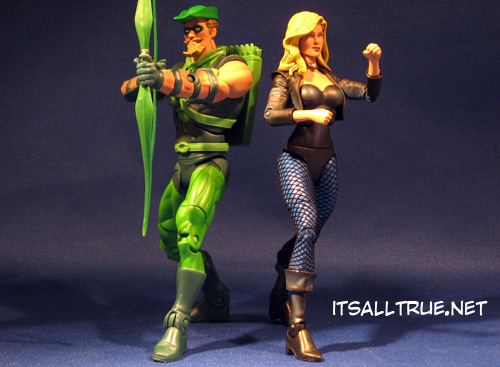 Normally, we make a quick jump over articulation for DC Classics reviews, but these two figures have some extra (and some missing) articulation points. Since Green Arrow is required to do some poses that most other figures wouldn’t need to, the 4H and Mattel saw fit to add ball-jointed wrists to his finished figure. And they’re awesome. All the figures should have these wrists. But when Mattel giveth, they must also taketh away. Green Arrow can’t look up, down, or even cock his head sideways at Hawkman’s conservative agenda. This is probably a factory screw-up as other DCUC9 figures are affected similarly, but we hope it will be fixed going forward. A properly ball-jointed head is one of the most important, and expressive, pieces of articulation.

In the planning stages, Black Canary had some articulation removed. Those unique DCUC hips were removed for the fishnets, essentially giving Black Canary a “T” crotch. While this would suck on any figure, it really sucks on her. She should be able to get into a ton of martial arts poses, but the “T” crotch is only good for sitting and standing. Since DCUC’s don’t have playsets to sit in, well, you can figure out how you’re going to pose her before you get her. She has some other blocked articulation points too. We love the hair, but it makes her head only able to look slightly to the left and down. Her jacket and arms bump together preventing her arms from being able to go completely down. One of these individually might not be so bad, but altogether and there’s not really much play or pose value to her. This makes her a little disappointing for kids and collectors alike. 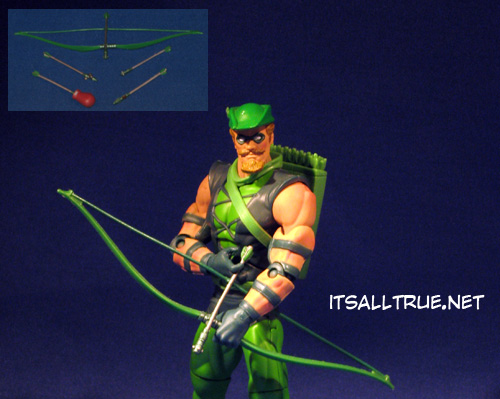 The paint work is mostly superb on these two figures. With all the details on Green Arrow, a little slop is to be expected, but there was very little. The details on his gloves, doublet, and head are all painted well. Black Canary’s paintwork is a little more mixed. First, her face is painted great. It’s one of the times that the final figure seems pretty close to the paint master. Her costume is only a little off. The bluish white highlights on black costumes never really looks that great, but it’s understated here and that helps. The painted details are here too like the charm on her necklace and her fingernails. Strangely, her hair is molded brown and painted over in yellow. For the Canary in this review, it worked as intended, and the hairs looks okay. But there are others where the yellow paint is so thick it covers the brown ruts or so thin that large patches of brown are exposed. With something that could go so wrong so easily, Mattel might have come up with a better paint solution for the hair. If you’re lucky enough to have two Canaries to choose from, be mindful. 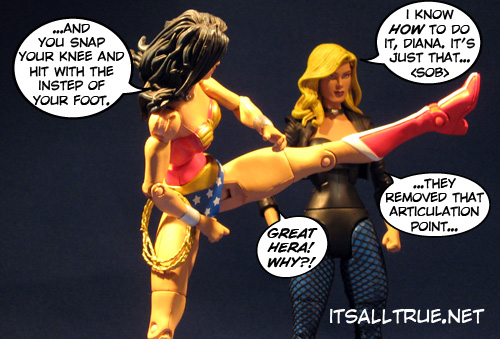 The accessories section is really all about Green Arrow. Ollie includes his trademark bow and four arrows. The bow is about as tall as the figure and has one arrow attached. Other than the attached arrow, these arrows are some of the best done for Green Arrow in this scale. The bolo arrow has the rope sculpted around the arrowhead. The time-bomb arrow has a tampo of a clock readout. The boxing glove arrow has the strings for the glove. They’re all so great that we wish they had somewhere to go, but not at the cost of the classic Super Powersesque quiver. We love that too. 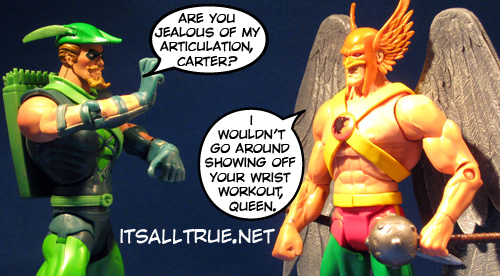 Black Canary is a figure that was conceived well and enough of the concept shone through that she’s not terrible despite some drawbacks. Toy companies still need to figure out how to keep long hair from impeding neck articulation though. And Mattel probably didn’t need to remove the hips to make the fishnets work – we’ve seen a couple fixes online where the joint is put back in and the fishnets are fine. And the hands could be bigger. Still, none of these problems are dealbreakers somehow. If a few things were better, she’d definitely be a front shelfer, but, as is, she is still a respectable middle shelfer with problems.

Green Arrow, meanwhile, is one of the best DC Classics to date. From the number of accessories to the sculpted details, everything about him sings together to make him a great rendition of the character. His joints are a little loose due to the particular factory used, but he holds poses so it’s not terrible. This version of Green Arrow is a front of the shelfer for sure.