Toys had a different meaning for me when I was a kid. Sure I had He-Man and GI Joes and Super Powers figures, but I didn’t collect them. They were just toys I enjoyed playing with that parents and grandparents bought me. Sometimes I knew who the character was, sometimes I didn’t. It didn’t really matter. I would make up my own names or stories. The one toy line that had the most freedom in creativity was LEGO though. Not only could you name and decide what characters were good or bad, but you could build them anything that your imagination and amount of Legos allowed. This is the toy line I remember playing with most.

Then I got older, and it’s a little different now a days. I collect He-Man, and Ghostbusters, and DC Classics. I know who each of the characters are, I know their back story, I buy them all just so I can have them all. Instead of playing with them, now I pose them and display them on a shelf. Maybe that’s considered playing at my age. Somewhere along the way to adulthood I lost interest in Legos. I still thought they were cool, and I would still see some really great sets, but I didn’t ever buy any. I’m not really sure why. I was tempted a few times, I just never followed through. At least until about a year ago. That’s when LEGO announced a new exclusive set. The Medieval Market Village. 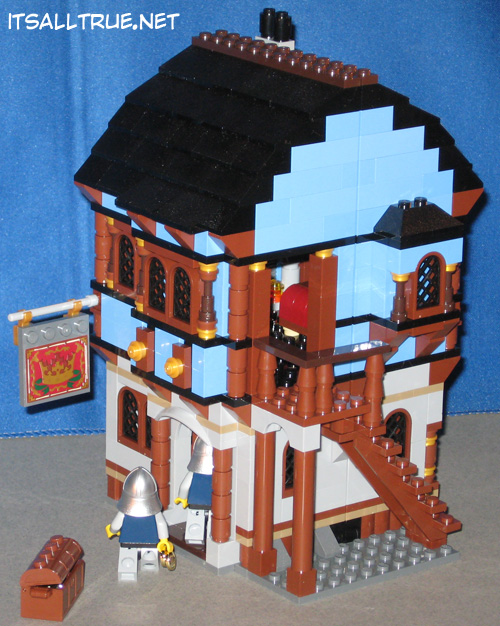 Up to this point in my life, my favorite LEGO theme, Castle, had been incomplete. There was never a village for the lego peasants to live, drink, sleep, and shoe horses. Now, thirty years later, LEGO was rectifying this situation. And that is how they got me. Let me tell you, LEGO is an addiction that you don’t know you have until it’s too late. 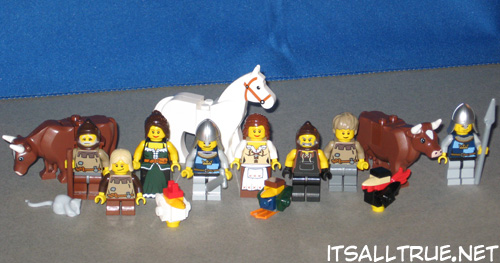 The first thing that jumped out at me when I saw this set was the cows. This is the first official set to have a LEGO cow. It’s also the only set you can get brown cows. There is a City Theme Lego Farm that also contains two cows, but they are black and white. Along with the cows, you get two soldiers, two women, a blacksmith, an old man, a young man, a kid, one horse, one rat, a chicken, a rooster, a frog, and a duck. Already a full village right out of the box. 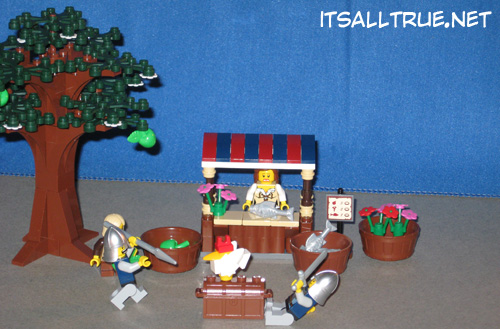 The two buildings, which I’ll get to in a minute, aren’t just the bulk of the set either. You get a small weapons stand for the soldiers. A cart full of tan hay bricks that either the horse or cows can pull around. There’s a small stand where your mini-figures can buy/sell apples, fish, and flowers from barrels. There’s a large tree, that’s leaves can hold both the flower blooms and the apples. There’s a table fit to hold a feast of a roasted turkey with removable drum sticks, a knife, a plate to hold your cut bread squares and cheese triangles, and various cups to drink from.

The Blacksmith’s shop is two levels. The ground level is the business half of the building. One side contains the stalls to hold the horse or cows. The black gates in the front open to allow access from both sides and there’s a really nifty sign displaying a horse’s head for those mini-figures who are new to town and need to know where they can get their horse reshoed. The other half contains the work area for the Blacksmith and another nicely detailed sign with an anvil advertising it. There’s a furnace with fire bellowing out, and an anvil close by to beat those swords into proper shape. One of the cooler features with this building is the apparent ingenuity of our Blacksmith. He’s apparently created a contraption that connects an arm, which holds the hammer, to the water wheel outside. As the wheel turns, the arm automatically pounds the hammer down onto the anvil. 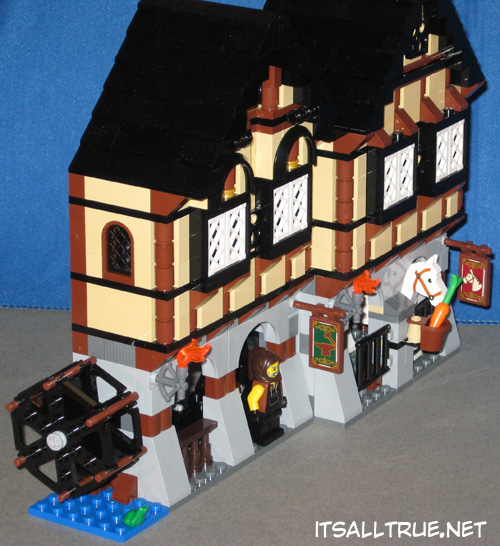 The upstairs of the Blacksmith shop is where Mr. and Mrs. Blacksmith relax after a hard day’s work in the village. It comes complete with a table and stool, and a stove to keep warm. The detail continues even here. When you open the stove door, you can see the translucent orange and yellow bricks that make up the fire inside. There’s also some nicely detailed “paintings” which hang in the upstairs rooms. 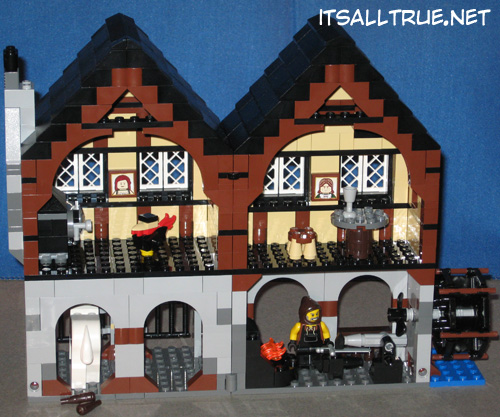 The Tavern/Inn doesn’t have any working parts like the Blacksmith shop, but it makes up for that in detail. Outside the door a large sign of a Crown hangs for advertisement. The lower level houses the tavern, complete with a bar for the mini-figures to order their drinks from. Sitting in the corner behind the bar is a stand that holds a keg of finest, or maybe worst, Lego alcohol in all the land. Going up the side stairs takes you to the Inn or perhaps just room where the Tavern owner lives. There’s a small dresser on the side wall, and a stool to sit in front of the little table under the window. The other half of the room contains an extremely detailed, yet simple in design, bed to rest on. At the foot of the bed is a fireplace with some more of those translucent yellow/orange bricks that denote fire. 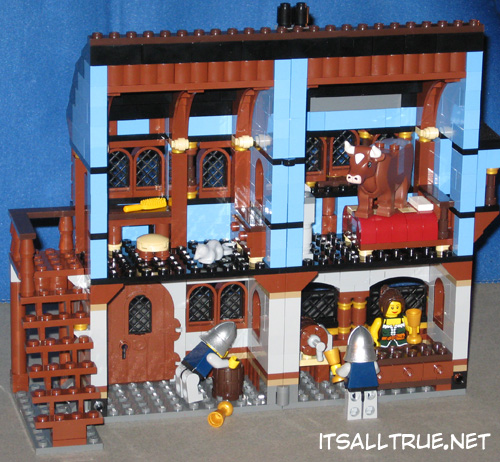 As awesome as this set is, there are a couple things I didn’t like. The tree is very fragile, its leaves and even its trunk break off easily. I was also disappointed to see that only the Blacksmith had an original design among the male peasants. The three others share the same tattered shirt. They should have at least thrown in one extra design. The women’s faces are exactly the same also. This isn’t as noticeable though since the hair helps change the look. Also, the soldiers are nothing new if you’ve been collecting any of the other recent Castle sets. Again, I wish their uniforms, or at least helmets, were different from each other. These complaints are all very minor though, and don’t really take away from the overall greatness of this set. 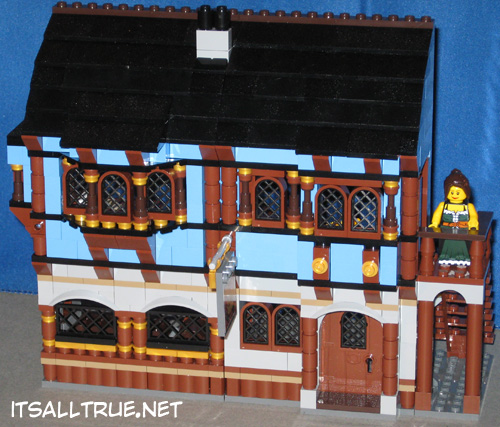 All together this set contains 1601 pieces and retails for about one hundred dollars. That may sound like a lot, but it’s actually a really good price for that many pieces. And with as interesting and detailed as this set turned out to be, I think it is well worth the price. The only place you can get this set is from either a LEGO store or online at Lego.com. 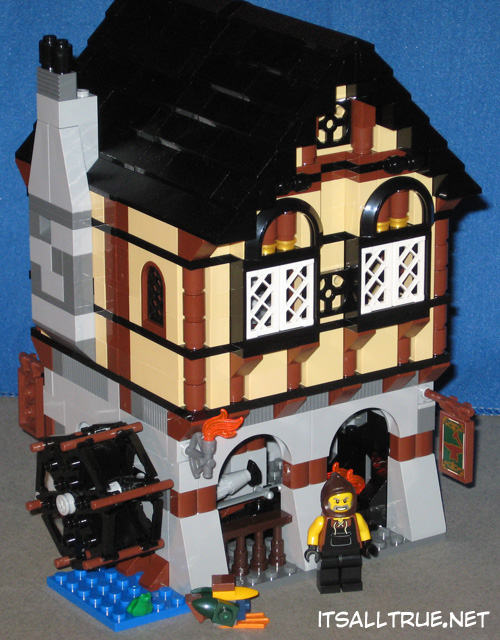