Sometimes as toy collectors, we can look across our displays and, no matter how many toys we have, only see the ones that aren’t there. They are the missing figures. The characters toy companies never got around to, never thought were important enough, or worse – the figures companies felt the need to show us at comicon in the “We’re Never Gonna Make These” case…

Though at first glance it might seem that Mattel is our Most Requested focus yet again, it’s actually DC Comics, Vertigo, Dan Didio, and Karen Berger in our sights this Friday. Mattel’s going to need their help if we’re going to pull this one off.

You’ve probably heard of Swamp Thing. He first appeared in House of Secrets #92 published by DC Comics, followed by a 24-issue run published by DC Comics in the seventies, and a second series in the eighties that saw 128 issues published by DC Comics. You might be familiar with him because of his appearances in other DC titles: Brave & the Bold, DC Comics Presents, Challengers of the Unknown, Infinity, Inc., Millennium, Captain Atom, Firestorm, Guy Gardner: Warrior, Batman, Underworld Unleashed, Green Lantern, and Aquaman. You might remember him from Crisis on Infinite Earths too.

Yet Mattel can’t make a figure of him under the current arrangement – because he’s not a DC Character.

In 1993, DC created the Vertigo imprint to advance the medium as a whole. Swamp Thing, starting with issue #129, was moved from the DC to Vertigo. The book had some high cailber writers too. During the switch, it was horror writer Nancy A. Collins (of Sonja Blue fame) at the helm. Grant Morrison and Mark Millar would follow in her footsteps over the rest of the run. Long story short, the book lasted four years under the Vertigo imprint and was one of the titles responsible for establishing Vertigo as a contender in the comic publishing industry. 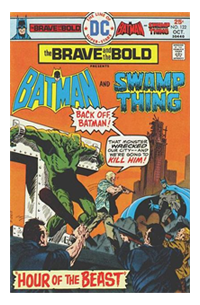 I’m not sure when the “no crossover” policy between the imprints started. Daniel (of the Endless) showed up in one of the better Morrison JLA storylines in 1999. And some characters like the Phantom Stranger seem to be able to move between the imprints despite the policy. The first time I remember hearing that there would be no crossover to protect the individual brands was from Dan Didio shortly after he took over.

Now, I understand the importance of keeping the integrity of a brand. I understand the doomsday scenario that Constantine might show up in Wonder Woman and some poor defenseless child might want to follow Constantine’s character back to Hellblazer. Okay, I’m being facetious – I really do understand, but at the same time, it seems slightly ridiculous, doesn’t it?

And then, there’s how often the rules get bent for various projects. We already mentioned Phantom Stranger, but there’s more than that. Grant Morrison got Animal Man back in the DC Universe. The Doom Patrol is back in the DC Universe too. Madame Xanadu and House of Mystery are Vertigo titles now. Vertigo tried a different spin on Deadman a few years back, before Deadman was once again placed in the DC Universe. Jonah Hex followed a similar path. So has Zatanna and a few others. 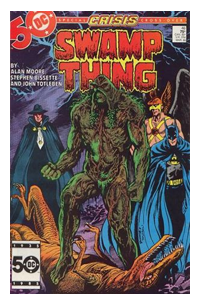 Bringing it back to Swamp Thing, the answer often given by Dan Didio is that “characters like Swamp Thing are essential to the identity of Vertigo right now – that’s one of the things that Vertigo was built on”. Let’s dissect this statement. One, Vertigo was built on the back of Swamp Thing. It was also built on the back of Animal Man and Robot Man, but those have DC Classics already. Two, Swamp Thing is essential to Vertigo “right now”? In 2000, Swamp Thing’s daughter had a 20-issue run. In 2004, Swamp Thing returned and pulled 29 issues. It ended three years ago and he’s gone unused since. That’s not very “right now”.

Look, boiling it down, we get it. Swamp Thing is Vertigo and the line is called DC Classics, but the truth is, Swamp Thing is essential to DC Comics too. Swamp Thing is one of those rare characters that made the jump from comics into public consciousness, at least for awhile. He’s been featured in two movies, a cartoon, and his own television series. He even had his own, Super Powers compatible, toyline. He’s not just a Vertigo character – perhaps more than any other crossover character, he’s important to both imprints. 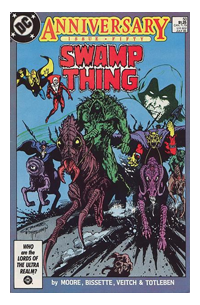 It is my feeling that DC Classics is the penultimate DC toyline. There are some folks waiting for the “next generation” of DC toys and maybe something will come along and be better, but I’m not banking on it right now. I’m positive I just bought the best Joker I’ll ever buy. I’ve got a Robotman and a friggin’ Killer Moth. The Metal Men are on the way to fight Chemo. This line is everything I ever wanted and it is flat-out wrong that Swamp Thing can’t be a part of it because of legal or imprint issues.

There needs to be a way to get this done. Maybe Mattel can get a Vertigo extension. Maybe Didio and Berger can agree that Swamp Thing is a DC character for 2010 so Swamp Thing can get his DC Classic on. I don’t care, but something needs to happen on this front. Swamp Thing is just as pivotal to the fabric of the DCU as he is Vertigo and he needs his day in plastic (again).

Is Swamp Thing a must in your DC Classics collection? Please take a moment to post in our comments section and let us know how you feel…