These two may end up being a couple of the harder C&C’s to complete. Worse still, they’re hitting stores at relatively the same time and competing for aisle space with a couple different “Best Of” case assortments. I don’t think either of them will end up being quite as difficult (or expensive) as Metallo, but unless we see a change in the next few weeks, these two C&C’s are going to be a hot commodity. But are they worth all the hubbub? 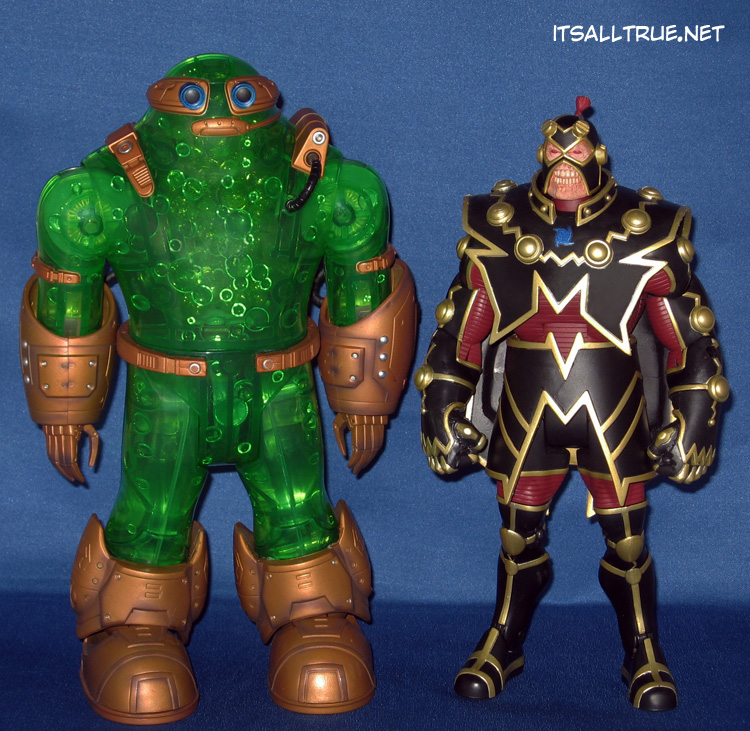 You might not know it, but Chemo is almost fifty years old. He first appeared in 1962, made by a scientist who kept pouring his failed experimental waste into a big plastic, man-shaped container (hey, it was the sixties). Anyway, one too many failures and ol’ Chemo gained sentience and put the poor scientist out of his misery, fought the Metal Men, and the rest is history. He’s shown up here and there since then (even Superman-shaped once) and this figure is based on his most recent design. His last big moment came when he was dropped on Nightwing’s town, Blüdhaven, as a big dirty bomb. He destroyed the city, but survived himself because of his unexplained ability to reform his plastic shell. Must be one of those crazy chemicals. 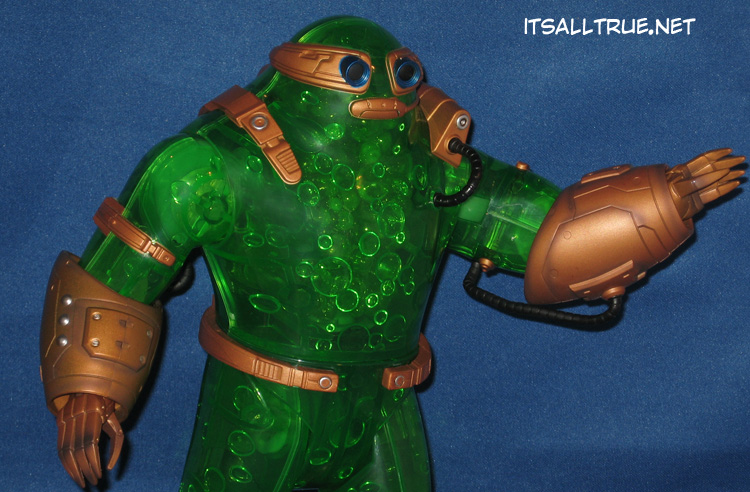 Like a lot of C&C’s, Chemo is a brand new, one-off sculpt. The 4H added a lot of detail to the parts they could (gloves, boots, belt, other attachments) and left the smooth parts smooth. In the early proto pictures, the figure was a frosted translucent green. But, as he was prepped for production, bubbles were added to the inner walls of his hollow parts and finally two inserts were placed in the chest to increase the effect. Some amount of Chemo torsos made it out of the factory without the insert, but the one in this review does have it. For a couple shots of an insert-less torso, check out ActionFigurePics.

Mostly, I appreciate the new bubbles. I think it gives the figure a great look, but I would have liked to see it extended a bit more. The legs are mostly hollow and could have used another insert. And more bubbles could have been etched into areas with a lot of open space. Personally, I don’t mind seeing the figures “innards” at all. One, I love clear stuff, and two, I see it as part of his armature. 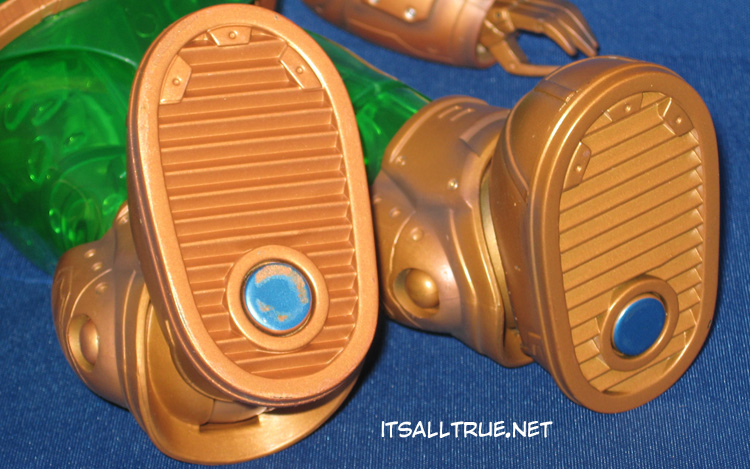 Chemo’s really limited in the articulation department. He does have ball-jointed shoulders and wrists, hinge elbows, hips, knees, and ankles, and a swivel waist. Normally, I’m annoyed when articulation is cut, but I have mixed feelings here. His ball-shoulders and wrists have good range, but his elbows are a little blocked by the gauntlets. And below the waist? Well, he can kinda step forward with one foot or the other, but that’s it. It should bother me. But, it’s Chemo and he doesn’t move much in the comics, so I’m letting him slide here. If you really love articulation, you might be disappointed in this figure.

Not a lot of paint here either. All the green parts are molded and most of the metal parts are molded in their color and attached. The painted metal parts do an excellent job of matching up with the plastic and both areas are weathered nicely with dark washes. There’s plenty of silver details all over the place and most are painted spot on. My Chemo does have some messed up paint on the bottom of his foot as seen in the picture above. 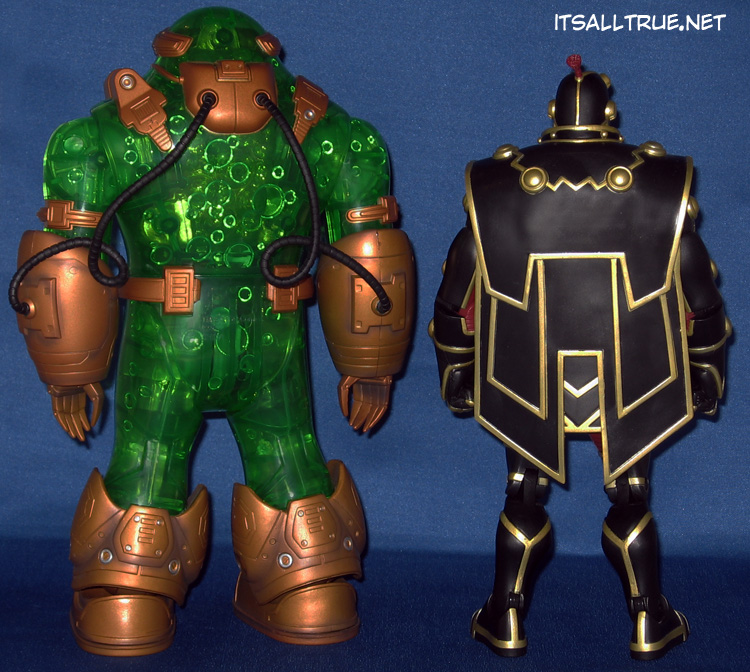 Unlike Chemo, Imperiex is only eight years old. But in those eight years, Imperiex made a big splash and destroyed Topeka, Kansas (he also did some pretty extensive damage around the DCU on Paradise Island, Atlantis, etc.). He did this not because he’s a menace, but because he’s a big walking ball of entropy in a candy armor shell that wants to restart the big bang. Since he’s living entropy, I’m not sure where his scary face comes from, but he didn’t just destroy cities with it, he also killed Steel, Maxima, Aquaman, Doomsday, Guy Gardner, Hippolyta, and Lois’s Dad. Sadly though, like Topeka, all of those heroes aren’t dead anymore (or never were) except one (alas, poor Maxima. I still want a DCUC of you though), so his track record is shaky at best. 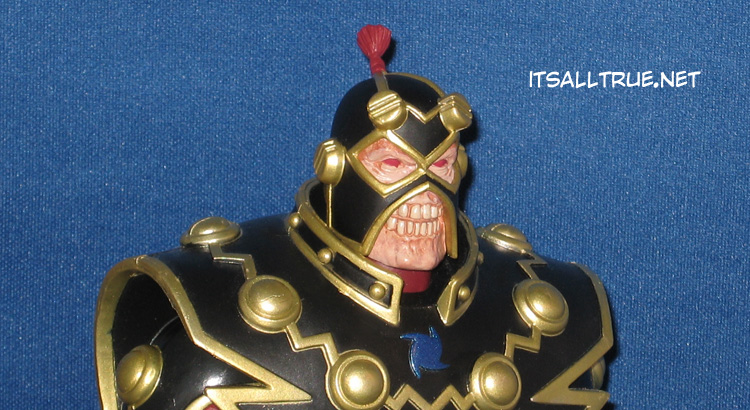 Imperiex is another all-new sculpt using pieces that probably can’t get reused. The funny thing is, I don’t even remotely care about Imperiex, but this figure is made too well to skip out on. No detail is just painted on. Everything is sculpted, and sculpted well. His face is downright disturbing because of the sculpt. All his armor has raised areas for the gold lines and his underarmour is ribbed. The skirt and shoulder armor is made of a soft-grade plastic. 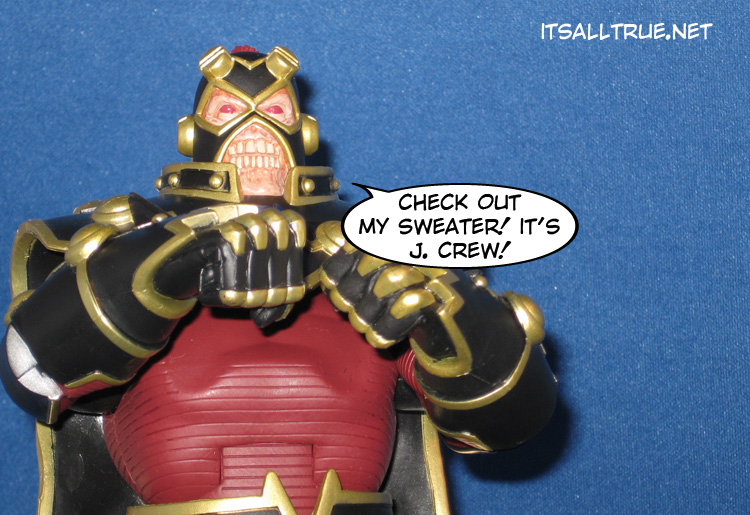 Imperiex has the articulation that comes standard on a DC Classics figure and they have great range of movement except for the head, where’s he affected by the same recent problems limiting the up-down movement, and the hips are blocked by the skirt piece (but the artic is in there). I do have a stuck rocker joint on his left ankle that I haven’t fixed yet, but the other joints were great.

Paint is where this figure takes off. He’s molded mostly in black (or red) but the gold paint is used extensively all over the costume. The lines are crisp in most places. There is a little slop here and there, but in the places where it’s overapplied, it can be removed. His symbol is raised from the armor and painted metallic blue. 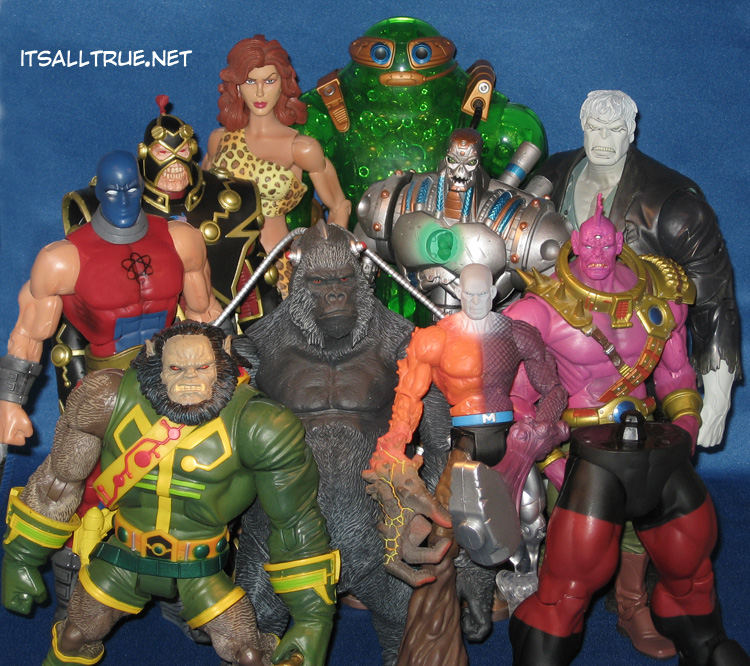 Overall, these two are some of the best C&C’s that Mattel has done so far. The only drawback to these two is their size. At his smallest, Chemo is still 25′ feet tall, which, if in scale, would be about three times as big as the current figure. Despite his lack of scale, Chemo is the biggest C&C, clocking in at about the same height as Giganta, but, of course, he’s much bulkier. He does have some articulation issues, but his look is so great, he still scores highly. If he stays one of the biggest (all signs point to that he will), he’ll make a great centerpiece to your DCUC collection.

Imperiex should be even bigger than Chemo, but he’s not. It’s sad, but the days of the Sentinel and Giant Man seem to be long past. I don’t know what to do except to hope that when it comes to the Anti-Monitor, Mattel will break the 10″ rule and at least go for a full foot. Anything less just wouldn’t be right. Anyway, Imperiex may be shrimpy because of Mattel’s height policies (and the economy in general), but his execution is sharp. Even if he may not be the greatest character, the 4H have given him the full treatment and he’s another home run C&C.

Check out the rest of our DC Classics 9 & 10 Coverage: