I want to stop here a moment and congratulate Hasbro for a job well done. You might notice a curious lack of pics on this page compared to the first one. Well, shortly after most sites had beamed back their coverage of the Hasbro panel & booth yesterday, Hasbro Press Kit images came rolling in. Because of that, the IAT Checklists for Marvel Universe, Captain America, & Thor were updated, image filled, and ready to go the same day as the panel. That’s awesome – so awesome that I wish a certain other giant toy company would follow their example.

I’m still being told that DC Direct is in its death throes and, if so, they’re apparently trying to go out with a bang. AFI has three pics of new Green Lantern figures including Blue/Green Hal, Clear Green Hal, Modern Guy, Red Lantern Guy, Arkkis, Natu, Black Lantern Blue Beetle, Star Sapphire Fatality, Stel, Munk & Warth! Warth looks to be woefully undersized, but he’s a must buy since I don’t see an elephant in DC Classics future. Oh, and Red Lantern Guy has a red construct chainsaw. If I only could spend $15 on accessories…

AFI now has up a very thorough look through the DC Direct Booth.

In case you hadn’t noticed, Vault’s gotten into Action League rather intensely as of late. So he was excited to see the newest wave of action league featured at Elkk Thunder’s Toy Room. There are some real gems there – St. Walker, Zilius Zox, Kilowog, & Wonder Woman, but the other half of the wave is filled with what appears to be a straight-up Superman reissue, a black redeco of Batman, and a green/blue redeco of Hal (we saw two of those in one day, I feel dumber). Hopefully, Mattel will aim for some more diversity and not just throw in unchanged versions of figures in new 2pks in the future.

JLU is finally over. Well, it will be soon anyway. AFI has two pics of the next to last batch from Toy Fair. I love that Future Superman and S.T.R.I.P.E. looks fantastic! The folks at AFI also got a chance to sit down with Toy Guru for an exclusive JLU interview where Scott reveals that the last seven card-carrying members of the JLU will be featured in a MattyCollector.Com multipack later this year. I’m sad to see this line go, but it’s going out classy. Kudos to Mattel for putting out the last 7pk to finish off that ridiculously huge roster.

This was the line where I was really interested to see some of the product, particularly how the DC Classics bodies would combine with the cartoon heads. There were three 6″ scale figures on display – Robin, Aqualad, & Spee… I mean Arrowet…. I mean Artemis!

The Robin looked odd, but the Artemis and Aqualad really impressed me. I love Aqualad in the cartoon (especially when compared to the boring mess of an Aqualad in Brightest Day), so that figure appeals to me more than a comic version would. Plus, he looks good, comes with a cool base and a ton of accessories to boot. I think both he and Artemis will blend in well with my DCUC crop (Robin won’t without a headswap though). The smaller animated line looks okay, but I haven’t checked in on the JLU collectors to see if they see them as compatible, they don’t look it to me. Check out this gallery at TNI for Young Justice pics.

There wasn’t much on display for DC Classics (one new wave, a few more Legion figures, a 5pk, and a couple figures from a new subline), but there was nothing talked more about at IAT today than Mattel and DC Classics. Hopefully, the gang at AFI won’t mind my using their pic here to illustrate the main focus of our discussion:

In 2011, Batman is getting his own spinoff line (rumored to be two waves of three figures each, no C&C) and the Freeze above (on the left) is one of three figures from wave one. He looked awfully familiar to us. We already knew that Mattel was using our SP Mr. Freeze image for retailer solicits (lame), but we didn’t expect the figure to be so close to our custom. There are some differences, namely the head/helmet, boots, and gloves, but the rest. Well, you see it. The wave will be rounded out with an angry black/grey Bats & Golden Age Joker.

The other half of the Batman Legacy line will consist of two-packs of figures based on Arkham City and the Batman movies. AFP has a nice roundup on Batman Legacy and the two-packs. It’s cool to finally see Gordon getting a decent figure!

In other DCUC news, we got confirmation of the Super Friends rumor for DCUC18 – Black Vulcan, Samurai, El Dorado, Toyman, along with Bronze Tiger & Modern Captain Boomerang. Together they’ll build a C&C Apache Chief. The Chief wasn’t shown, but ToyArk has a nice look at the regular figures. Also shown were more Legion figures: Wildfire, Chameleon Boy, & Timberwolf. Those can be found in the 40+ DCUC pics at TNI. Oh, and we got a date for that Legion 12pk – August. Y’know, right after you have to blow all that money on SDCC exclusives. Nifty. 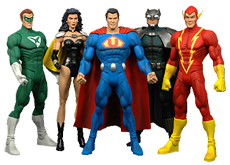 Last but not least was the 5pk reveal: the Crime Syndicate! Superwoman, Owlman, & Ultraman are modern versions and look awesome while Johnny Quick & Power Ring are classic versions that look okay. Not sure why they’re mixed (are the SA Power Ring & Johnny back because Hal & Barry are back? lame, but possible), but it’s a cool set nonetheless. I still want the other two modern figures and I definitely still want a classic Owlman. AFI has a nice shot of the CSA 5pk.

While there is still plenty of Toy Fair left, I felt largely wrapped up once Mattel finished DC & MOTU. I still haven’t been able to sort out my feelings about the MOTU reveals. We saw the scheduled figures through August:

ToyArk has two MOTU galleries up with tons of images.

A few other items were there too like our first look at the red weapons on April’s Weapons rack as well as the next MOTU vs DC 2pk: She-Ra versus Supergirl. Neither figure “received development” which means there’ll be no review of it here at IAT. Finally, the reveal of Megator as a Q3 item means that Swift Wind is indeed Q4 and Mattel mentioned that a new She-Ra will be coming out the same day. The difference? The new She-Ra will be able to ride Swift Wind.