I was really looking forward to the twenty-third figure in the Sci-Fi Revoltech line. Not only is Gigan one of Godzilla’s main enemies, but he’s a fairly prominent kaiju. Surely his solicitation signified that the Sci-Fi line was moving on to the more prominent and popular members of the Godzilla-verse, right?

As my newest Revoltech figure was making its way to me from Japan, Kaiyodo was hosting Wonder Festival. Instead of revealing their upcoming plans for which version of Godzilla was going to be released and when, they basically confirmed they were never going to make Godzilla. If that wasn’t bad enough, the kaiju they could were either tabled indefinitely or cancelled all together. (Poor Jet Jaguar.) 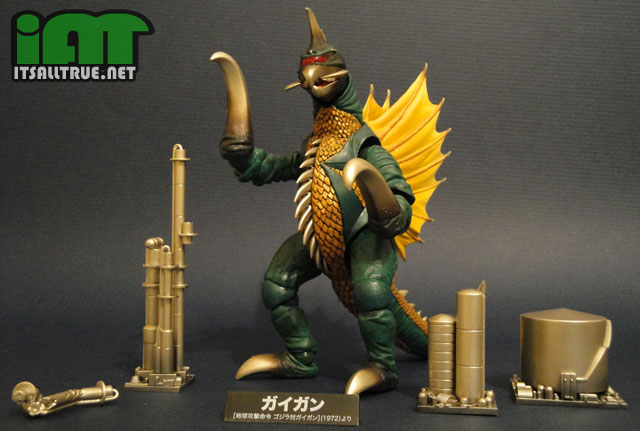 So now, instead of being a symbol for the future of the line, Gigan is a reminder of what could have been. Which is why I’ve put this review off for a few days. Although I really enjoy the figure, he’s probably the last Revoltech kaiju we’ll be getting. Sure, Bandai is going to start their own line of detailed and super-articulated Godzilla figures. And I’ll probably end up getting them if they’re reasonably priced. But I have the feeling that each purchase will carry with it the slightest bit of guilt. 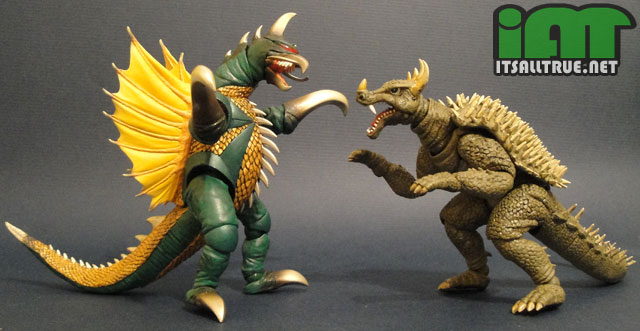 Is Gigan awesome? Of course. Awesome is pretty much the only word to describe a giant green cybernetic chicken with meat hooks for hands and a circular saw coming out of his torso. (Unless you’re my girlfriend, in which case the word is apparently “ridiculous”.) Gigan’s been sparring with Godzilla ever since Godzilla vs. Gigan debuted in 1972. But my favorite appearance was probably when Jet Jaguar kicked his but in Godzilla vs. Megalon. 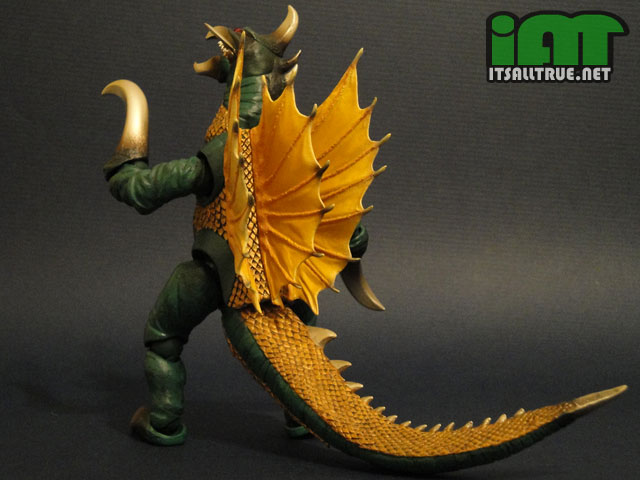 The figure itself has the same high level of detail I’ve come to love and expect from the Sci-Fi line. There are tons of sculpted scales running down his body and tail, separated by wrinkly green flesh. His hands and feet are completely smooth giant claws that match the spikes running down his neck. The fins on his back are soft and resemble stretched skin. They even did a great job on the inside of his mouth. He has a tongue and a sharp barb sticking down from the roof of his mouth. 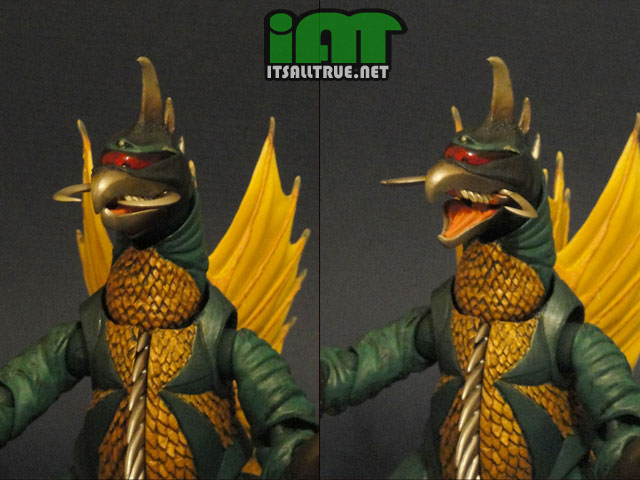 Gigan’s mostly molded in the green plastic that makes up his skin, but there’s a nice dry wash that really brings out the sculpted effect of the wrinkles. The various spikes and spines around his body are given metallic silver while his scales are gold. Both do an excellent job offsetting his sharp bits from his dark body. Then there’s his evil translucent red eye which gives him a great menacing look. Sadly, my Gigan suffers from a tiny bit of silver paint slop just above the left side of his eye. But that’s not so bad. What really is a problem is the bit of paint that chipped away on his right hand (hook?). Continue to Page Two….