Got that morning after feeling? I do. I not only spent all weekend being abused by toy companies long term plans to take my money, I foolishly vowed to have the IAT Checklists updated before the weekend was out (they are!), Once I was done, I remembered there was still that little matter of Armchair Coverage…

Before I get into any of the nitty gritty, I want to give a huge shout out to the folks that attended this year. For those of us that are unable to attend, they make this weekend miserable for our wallets instead of just miserable for us. It feels like more sites attended than normal this year and coverage came back very quickly. Some of the coverage is getting so well-organized that I almost wonder if Armchair Coverage is even going to be needed next year.

I’m going to start with Hasbro because they simply blew me away on Saturday. I had errands to run that night and I had to be peeled away from the computer to get them done. 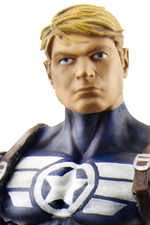 MU is that line that’s worming its way into my collection even though I know Legends is coming back. I’m not anywhere near completist with the line but the newly revealed lineups including Steve Rogers, Darkhawk, Scarlet Spider, and a First Appearance Captain Britain have me double checking my Marvel budget for the upcoming year. The Marvel Universe 2011 page has been updated with the press kit images – and, as requested, the new pics will open to larger images when you click ‘on em. We did hear about some variants like a Classic Darkhawk and Astral Doc Strange and a 2pk of Adam Warlock & Thanos (I just bought that guy!) that weren’t shown, as well the upcoming inclusion of Rocket Raccoon & Groot into the line.

For some great booth pics – including images of the Fantastic “Three” and Original Avengers 3pks (love the gold FA Iron Man) check out ToyArk’s Booth Coverage. Oh, and on that note, if you’re like us at IAT and love that the new Cable comes with baby Hope, buy him early. Later shipments won’t have Hope. I’m sure there’s a bad pun in there somewhere…

I wasn’t expecting much Marvel Legends news since 2012 is still a bit way, but we did get some tidbits! ToyArk reported that the first figure out of the gate will be a SDCC 2011 Exclusive modern Thor with the first full wave to follow in Spring 2012. A few names were dropped for that wave including Bucky Cap & Modern Hawkeye, but more importantly, there will beBAF and the first one is none other than Terrax!

Until then, 6″ fans will be tiding themselves over with the IM: Armored Avenger line which is continuing with figures of the Crimson Dynamo and War Machine (Initiative). On that note, the Iron Man 2 4″ line appears to be wrapped up. A few IM2 items were shown, but nothing for that scale except for a repaint of the Indy Car (which come to think of it, still needs added to that checklist… doh.)

The Captain America line only had a handful of items that we hadn’t seen before and how much you like ’em might vary. Personally, I love the idea of a Red, White, & Green Cap figure and I’m going to buy it (Hasbro calls it “Jungle Fatigues”, but I’m calling him “Captain Italy”). Other variants included Night Landing, Desert Fatigues, and Arctic Gear. Press Images can be found on our checklist while I recommend the gallery at MarvelousNews for up close shots of the newer Cap items.

The Thor movie line is a real conundrum. The figures look really well done, but I’m not sure how into them I can get with no comic figures in sight. It’s that silly situation where you’ll spend money on a crappy comic-based Thor while passing on an awesome movie-based one. The NYTF lineup revealed a fairly deep roster for this early in a movie line with 12 characters from the film. Our Thor Resource has the press images, but I might have a couple of the Thor figures out of order – I’ll get it fixed if I do. For booth images, I’m going to stick with MarvelousNews for some great closeups.

While I was impressed with a lot of Hasbro’s Marvel offerings, it was the G.I. Joe section where I was sure Hasbro was out to get me. Not only is the line veering back towards updated figures of my 80s favorites, but they sprung for an all-new Skystriker (the original mold was destroyed/lost years ago) and to make it that much more appealing, it’s getting a Transformers Starscream redeco. That news shot through the internet so quick, I think we all knew within minutes! It’s pretty cool even if it doesn’t transform. The SDCC version will be piloted by Cobra Commander and he comes with a Megatron pistol to boot.

After I calmed down a bit from that TF/Joe combo, there were a great mix of Joes to check out including updated versions of Sci-Fi, Crazylegs, the last Storm Shadow you’ll ever need, a Techno-Viper (!!!), and Steel Brigade. I honestly couldn’t pick one to be most excited about. There’s a few others I didn’t mention (including some Renegades stuff, Zarana, and a sweet new Hazmat Viper!) so check out HissTank for Press Pics & Booth Pics. 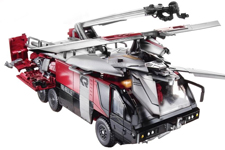 Honestly, I think Transformers was the one area where I wanted to look and find some cool stuff, but I got lost in all the sub-lines. There was Mech Tech, Cyberverse, Prime, Dark of the Moon, Robopower, Rescue Bots, Kre-O, and eleventy billion others I can’t remember. I’m glad that one of my favorite properties is clearly doing very, very well, but I didn’t always know what I was looking at. 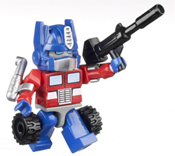 I did notice a curious lack of Generations-esque stuff. With Kup, Wreck-Gar, Scourge, etc., hitting stores, I wanted more of the same and didn’t find it because the overall line appears to be transitioning back to movie product. I did read that more Generations were in the pike though, so here’s hoping.

Some stuff did catch me eye like the little Kre-O minifigures (think G1-styled Lego dudes) and this awesome Sentinel Prime (pictured right, click on the image to see the bot mode). That gobbedly gook on his cab in alt mode has to go, but he looks cool otherwise. My suggestion for TF coverage is to just hit up TFW2005’s Toy Fair category and poke around.

I realized some time back that I’m anti-George Lucas. No, I don’t have a beef with the eternal tinkerer. It’s just that Lucas has all the time & money for Star Wars and I don’t have enough of either, so I just can’t keep up with the line these days. One thing I couldn’t miss though was a giant Death Star 12-figure pack coming to SDCC (via ToyArk). It’s a giant package with 12 big packages in it. I honestly don’t know how you’re supposed to get it home.

I also spotted a really sad looking Bariss Offee. She’s covered in worms or tentacles, so the sad look definitely makes sense. Rebelscum has a galleries of both the press pics & the showroom for your viewing pleasure.