Enter Fansproject. Now, I’m still relatively new to the Third Party scene (even though the money I’ve spent is quickly piling up), and I wasn’t really aware of the updates that transform Bruticus into Colossus until FP announced they would be making new versions that match Takara’s reissue of Bruticus. Honestly, it almost feels like collusion (but of course it isn’t) because I don’t know who would drop serious coin on United Bruticus without access to the FP pieces, but I digress. I’m just glad it all worked out and that I had the nearly $300 to drop on both sets. 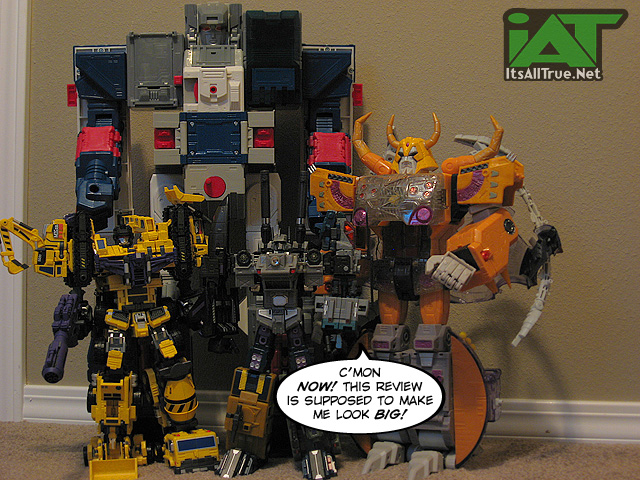 That’s pretty much because FansProject just kills it. Heck, I’m just happy to see Blast-Off back to being a shuttle and Swindle back to being a Je- well, a Humvee, but it beats a helicopter. Those two new robots are sharp in both modes, easily making the Bruticus parts look a little lackluster. The nice thing is that the extra Bruticus parts help the original figures out too. We’ve got missile batters for Vortex, extra cannons for Brawl, and Onslaught is basically overhauled – changing from a missile truck back into an oversized carrier (which can haul Vortex’s Shuttle mode or be configured to be a launcher for that Shuttle. Pretty cool!)

The FP set includes new feet, hands, a codpiece, cannons, plenty of weapons, and a new lower arm that, in addition to a new transformation for Vortex, essentially makes him an all-new limb too. Oh yeah, did I mention the new head? It does seem a little thin, maybe anime-like, but it looks tons better than the original. All of the pieces together make Colossus damn impressive on the shelf, much more alive than the Energon original. 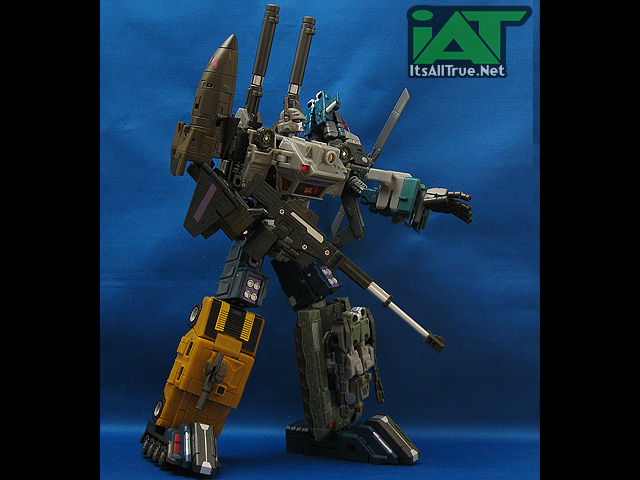 The only complaints on the set are the right wrist and the new waist piece. The right wrist is woefully loose and that hand seems to sag no matter what’s in it, even nothing. You’ll notice in a few of the pics. The waist piece meanwhile is tight, but somewhat incompatible with the upper thighs on Onsalught/Colossus. I had a heck of a time keeping that piece on when I playing with and posing Colossus.

In addition to the two robots and the add-on pieces to beef up the originals, the set also includes a sword and three guns. Two of the guns break down into two smaller guns and the hands and lower arms combine to form two additional weapons. Counting the giant back-cannons, which can be held by Onslaught, that means the regular-sized robots have 8 weapons to split between them! If I was worried any of the Energon bots were going to get picked up before, I definitely don’t have to now after all the excess firepower Fansproject sought to give them. 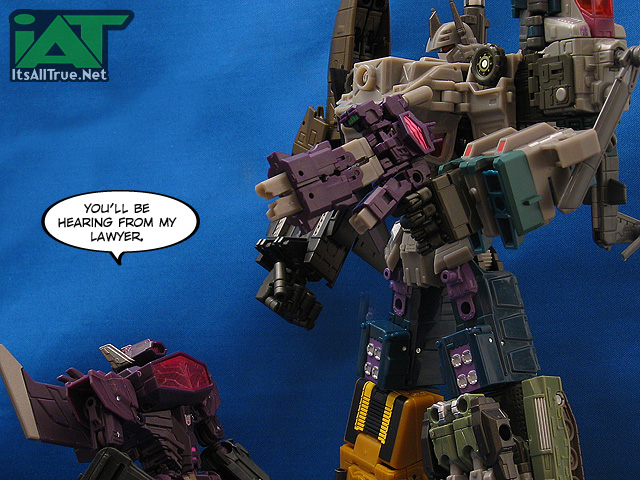 Also, since I ordered this set just a few months ago, an additional gun was included: Quake. Quake is a tiny not-Shockwave (drawing his name from the amazing third party Quakewave) that is sized for Colossus to wield. This is a nice extra, but I’m not totally in love with the gun more – it kinda looks like Quake is just standing there, rigid as a board, in Onslaught’s hand, but I’m sure I’ll find a good use for it.

Overall, the price is steep – nearly $300 for both sets – but this is a great rendition of Bruticus. The FP Add-On kit really saves the set, but there is some charm to the originals and that helps too. If you have the money to drop on both sets and love Bruticus, I think you’ll be happy. Some things could be better like the blockage at the hips, a better-designed replacement chest plate that gives the figure more bulk, but those are just quibbles on an otherwise great figure.

(In Which I Review the Same Molds Over & Over…)