When I moved into my new house at the beginning of this year, I had the seemingly great idea to chronicle moving my collection. I got one article up, about the move itself, and then my life got flipped turned upside down. I didn’t get out to Bel-Air, but my Recollect blog fell completley off my radar.

Well, to be fair, it wasn’t that my Recollect! Blog never got started, it was that moving my collection never really got finished. It still isn’t as I write this, but I made a big (albeit temporary) leap forward this weekend. It was the first time I’d had consecutive days off since Valentine’s Day (yet I somehow managed to go into work both days) and I wanted to get a big chunk of the toys out of boxes, off the floor, and up on the shelves. Easy enough, I thought, if I start with MOTU Classics.

Since this is the first ReCollect! entry, I need to cover one thing before we get started. When we moved, I decided I needed a new shelf. While my toy cellar (now my toy garage even though I keep calling it a cellar to my wife’s bemusement) was always embarrassingly too full of toys, I usually only a kept a modest shelf on display. I’ve had the shelf for years; my Dad & I found it when I was in my teens. I originally used it for its true purpose: an entertainment center. It held my TV/VCR combo, my Gamecube (!!), and a bunch of DVDs. If you look close you can see some toys on it: a bunch of Stikfas claiming the top of the TV as their own. Over time, the toys would end up covering the whole unit. Below is an older pic from 2009. If you look past the shameful amount of dust, you can spot the most recent additions at the time like MOTU Classics Faker & Mer-Man. You might also spot that custom DCUC Mr. Freeze that ended up being the template for Mattel’s later version. That Mr. Freeze is also a big reason why IAT exists, by the way, but that’s a story for another day. 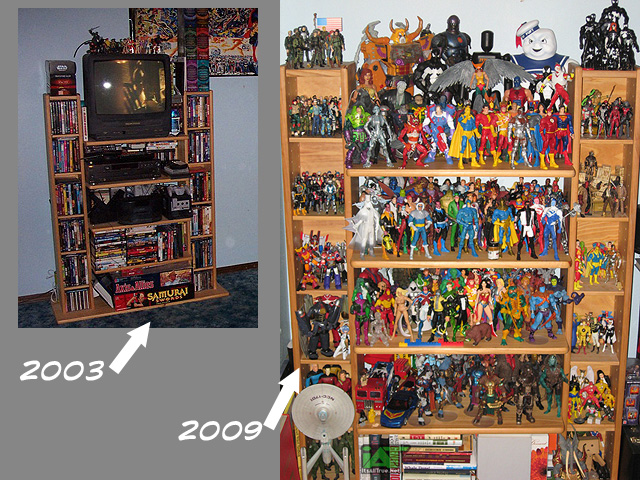 Anyway, the old shelf was great, but it was more for a collector who wanted to display a few choice items from multiple lines, not someone that had started amassing giant collections like MOTU & DC Classics. It was time for a change. It took weeks, but I finally found this 12-Cube beauty at Office Max and I got it for a steal. It was finally time to replace my old shelf, setup my toys, and get the ReCollect! Blog started. But, yeah, that was kinda like February and it turns out that, June started the other day? Oops?

When I decided to setup my MOTU Classics this weekend, I knew it was somewhat futile. Mostly because Castle Grayskull simply isn’t going to fit on it and that’s kinda sorta supposed to be the centerpiece of the line. I decided to not worry about it and go ahead, but, as any collector knows, my space on this new shelf started filling up way too quickly. 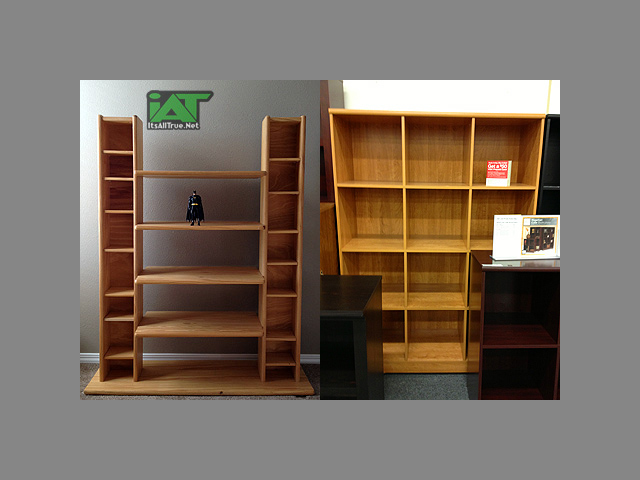 I ended up giving MOTUC a 4 shelf limit. The first thing that meant was some larger items had to be managed. The Giants. The Beasts. That gorgeous Wind Raider. I couldn’t bring myself to not display the Raider – heck I couldn’t bring myself to throw away the box. For now, I plunked my TRU 2pk He-Man in the pilot’s seat (my 2nd favorite He-Man) and placed him in the corner of the room until I figure out what to do with it. The Beasts though, some hard decisions had to be made.

The Cats had to stay of course. Swift Wind got a similar pass, but I’m not as sold on him down the road. I left the giants because the shelves have 14” clearance and I figured they would help with the height until I get some tiered stands to raise up the figures that are towards the back. I can already tell you though that Procrustus will outlast the other two should I need to cut down on the giants (& he also got a coveted spot with the Heroes on the top shelf). 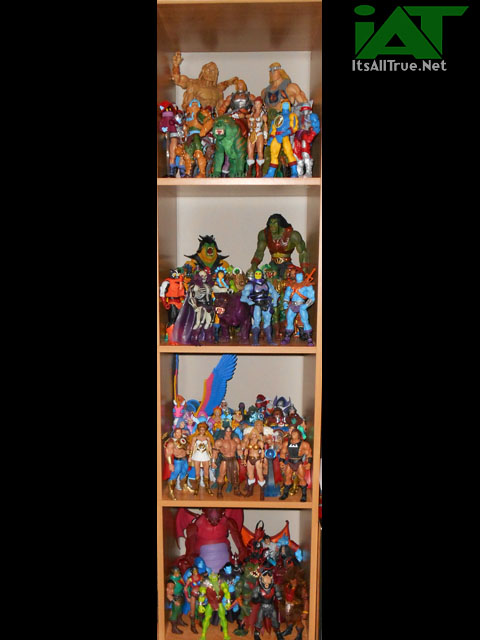 Granamyr had to stay too, of course, but I didn’t want to split him off like the Wind Raider. He needs to be with the figures – even though he did get stuck in the bottom shelf with the Horde & Miscellaneous Villains (At least until the Castle implodes this incarnation of the display). Finally, Gygor made the last cut due to his adding height and his lemon & limey color scheme. Sadly though, the Shadow Beast & the Griffin were the first casualties of limited space. The Griffin just takes up too much space and the Shadow Beast is just too generic – both are oversized army builders really and this isn’t an armybuilder friendly display. Hopefully, I can figure out a bigger solution to get back to those guys in the future. Maybe a shelf will free up after I figure out what I need in the other 2/3rds of the shelf? Continue to Page 2…

35 thoughts on “ReCollect! Part I: Re-Mastering
the Universe (MOTU Classics)”