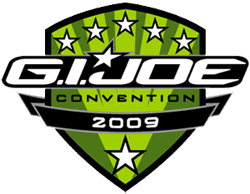 We had a great time at Friday’s Joe Con, but probably the most exciting part was the Hasbro panel. Here’s my rundown of what was revealed and the details on some of the awesome figures we’ll be seeing into next year. For those of you who haven’t seen the movie yet, I won’t go into any spoilers, but we all know that there is going to be sequels and that Joe didn’t defeat Cobra for good. With that said, the 2010 line will be based off of where the movie ended, with the overall theme being “The Pursuit of Cobra”. Cobra has set up four bases around the world to develop a new weapon that will help them become a true military force. GI Joe has sent out specialized strike teams to take down Cobra’s secret bases and stop the development of the secret weapon. What is this secret weapon, you ask?

Read More
Today, we're suspending our normal features. We'll bring you more SDCC Exclusive goodness tomorrow and into next week. Friday Five will return in seven days. Why you ask? Well, the ItsAllTrueCrew is heading for Kansas City to attend JoeCon 2009! But we're not going to leave you hanging! We've setup…
Read More