Fourth in our five part series featuring the eighth wave of DC Universe Classics, this review covers the red and green Parademons.

To be completely forthcoming about my red Parademon review, I need to tell you all something. Tomorrow, I’ll be 29 years old. I tell you this because twenty-four years ago, I got some Super Powers figures for my birthday. One of them was the Parademon. So, you should know that if this review sounds overly positive about a certain red one and a little less impressed with a certain green one, it’s only because I’m completely biased. I do understand the canonical importance of the green Parademon and I do appreciate it. But I didn’t have bills or a job when I was five years old and that Red Parademon reminds me of those good times. Now, on to the review… 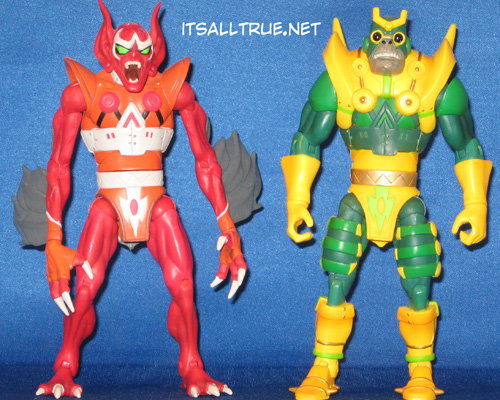 If you’re not familiar with a Parademon. They are essentially Darkseid’s cannon-fodder paratroopers. They swarm down from the sky and try to kill you en masse. They aren’t that bright or useful, they’re only real strength lies in numbers. The green ones are the standard, time-tested Kirby comic book look and the red ones are the redesign Kirby did for the Super Powers comic/collection/cartoon. That’s pretty much all you need to know.

We don’t waste much time on DCUC articulation here at ItsAllTrue. Though they don’t use the buck body, the Parademons have the standard set from the neck down. The green Parademon’s shoulders are blocked a little by his shoulder-pad, but not so much that it blocks any movement you might want to pose it with. The key difference is the head. Because of the body construction, the red one can look up and down very slightly, and the green one can not look up or down at all. Other than that, we’ve all seen the articulation before. 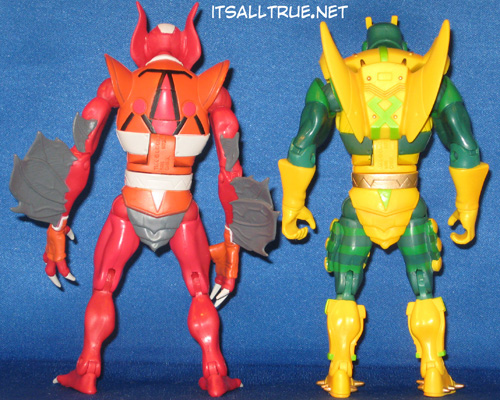 About that body the Parademons use? Take a look at those pictures above and not the similarities. That’s the same body. This is why we call the Four Horsemen geniuses. If we take the red Parademon as the base, the green one sports a new head, new upper body armor, new arms from the biceps down, new thigh pads, and new boots. The central torso, shoudlers-to-thighs, is all used again. It’s this solution that probably allowed for a canon figure and a Super Powers version and I appreciate it. I only really want the Super Powers one, but it wouldn’t be right if they only made that one. 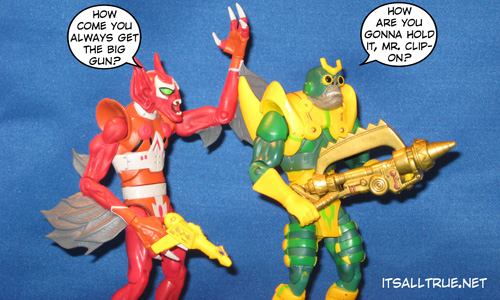 Both Parademons are packaged with a yellow pistol that is pretty much spot-on to the yellow gun that came with the Super Powers Parademon (it’s only missing the ammo clip). It’s designed so that it has a normal round grip (for the green Parademon) and a clip (designed like the classic handle) so that it can be held by the red Parademon. The green parademon also sports a rifle that can separate into two parts. But that’s not all, there is a hidden story behind these accessories.

The Wave 6 C&C Kalibak debuted with three accessories, but was only released with one. The other two accessories are included with these Parademons. The pistol features a peg that will hook onto Kalibak’s belt, and the top of the rifle is Kalibak’s Beta Club. I have to give a round of applause to anyone who worked that out. Starting with the Four Horsemen at sculpt stage and through to the Mattel toy people that didn’t seal that rifle back into one piece in production. Kalibak and I both appreciate it. 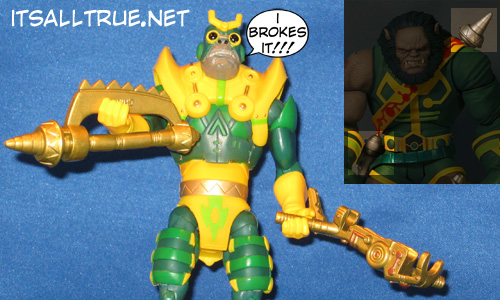 I picked up these Parademons from BBTS back in April, so I didn’t get to choose paint apps, but I didn’t have to. Nearly every paint app across the entire wave was sharp. Mattel has really improved in this area in the last few waves. It’s great to be able to grab the set online and not have any concerns. 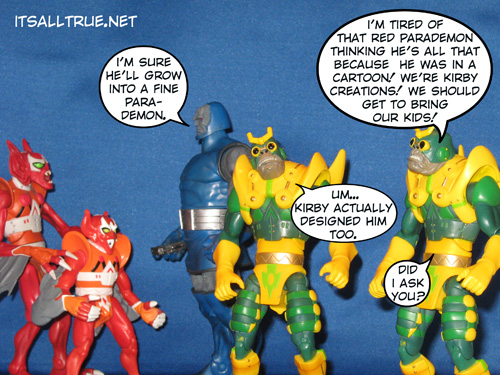 Overall, I like both these figures. I don’t care for the green design, but the Four Horsemen did an excellent job with it, even working it around the red body. The Red Parademon will always be a cherished DCUC piece for me, so I have to go front of shelf for him. He’s a perfect update of the classic. Rightfully, the Green Parademon deserves the same score. Even though he’s at the back of my shelf chilling with the big figures of Darkseid and Kalibak, he should still be considered a front of shelf figure.