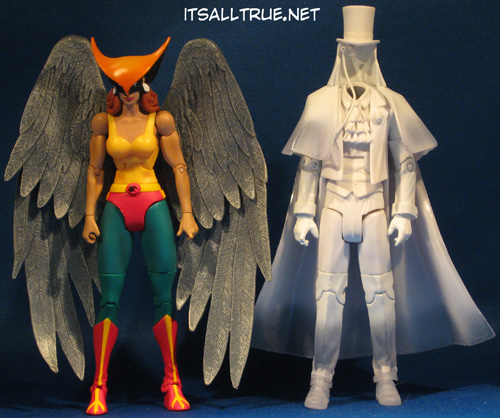 Normally, we make a quick skip over articulation for DC Classics reviews, but these two figures have some noteworthy articulation points. First, the Hawkgirl is based on the well-articulated DCUC female buck, but this presents two problems. Her headsculpt is perfect, but because of her hair, she’s permanently looking down at her feet. Normally, you could correct for this by kicking back a little on the ab crunch joint, but her wings are attached in such away that her ab crunch is also unable to fix her sad body language. Basically, the way you see her in the picture above, even with all that articulation, is the only way you can pose the head. It’s certainly not terrible, but it is dissappointing on an otherwise great figure. To compensate, I have a few flight stands (c’mon Mattel a good line has those!) and she gets one so her looking down is less noticeable in my display. Despite that bulky harness, her wings can be fully forward or fully back and they have an extra point of articulation so they can spread out into an impressive wingspan. Impressively, the figure is balanced so that she can stand unassisted with the wings forward (spread out or not) and that’s one of my favorite things about the figure.

The Ghost features the first use of a new body for DC Classics. It’s not going to be unique, the 4 Horsemen have cleverly designed the body to be able to be reused as the Joker (in the upcoming Wave 10) and it looks like it will be a good fit for a few other characters like Alfred, Uncle Sam, and Zatara, to name a few. The body features all the same points of articulation, minus the head/neck for obvious reasons. His cloak is attached at his mid-back and while it can be a little cumbersome, it doesn’t interfere with his articulation much at all. 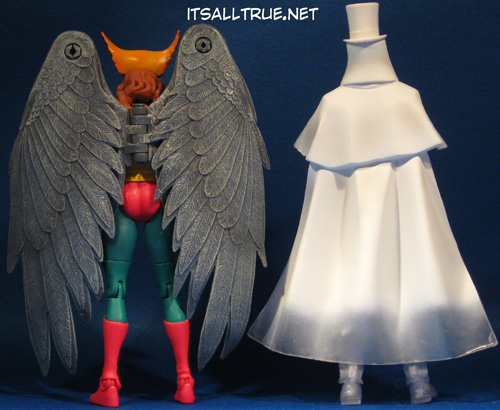 As we’ve seen it improving over recent waves, there’s no real paint issues with these figures. Gentlemen Ghost is painted well. No, I really mean it. Parts of the figure (the feet, the calves, and the cloak) are molded clear and painted white as they fade down to clear. It gives a great effect. Particularly on the shoulders of the cloak, where in certain poses you can see his arms showing through. And his white color is very bright, not dingy of off-color at all. Very ghostly. I likes. Hawkgirl sports a few more paint apps, and they’re all crisp for the most part. On the ones I’ve seen, her boots and belt area are usually pretty free and clear of slop, but you might have to keep an eye on the nose of her mask. That thin orange strip surrounded by so much black is hard to keep clean. 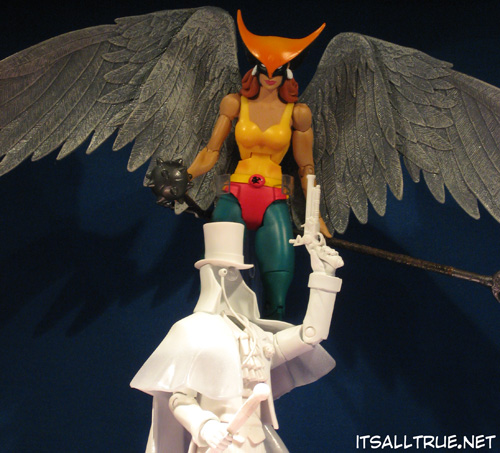 For accessories, this is a decent duo. Hawkgirl sports her mace and a spear while Gentlemen Ghost has his flintlock pistol and his cane. All of the weapons are held easily. Hawkgirl was the stand figure for the wave, so you get an extra blue stand with her (it’s around here somewhere, I don’t use them since she stands fine on her own). The Ghost comes with Giganta’s head and pelvis pieces, and as a nice extra touch, a mini Atom is included (he’ll be reviewed with Giganta). 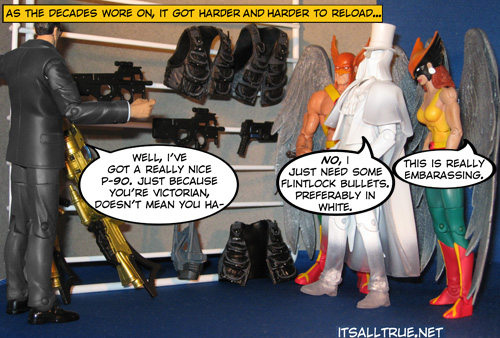 Overall, the Hawkgirl figure is a good rendition of the character if you overlook the flowing hair vs. articulation issue. This isn’t the first time it’s happened and it won’t be the last. Gentlemen Ghost is the real standout for the whole wave. The fun thing about him (and the hard thing about collecting 4 Horsmen sculpts) is that he’s a figure that might get dismissed when he’s announced. In his 60 year history, he’s hardly ever been that interesting. But the Four Horsemen take the idea behind the figure, and with their hammers and forges, work it into a cool figure. Hawkgirl is a middle of the shelf figure based on name recognition alone, but the Ghost? The Four Horsemen took a character destined for the back of the shelf and made sure he was worthy of being in front.