Second in our five part series featuring the eighth wave of DC Universe Classics, this review will cover Mr. Terrific and Commander Steel. 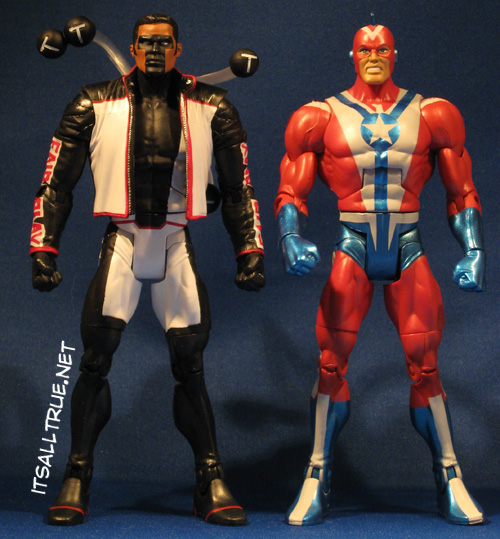 When reviewing DC Classics, the heavily reused buck bodies always make me feel awkward discussing articulation and sculpt, so let’s get those out of the way. These two figures are built around that standard DCUC buck body. Steel only required a new head while Mr. Terrific sports his jacket with new sleeve arms, and a new head as well. The articulation is standard for the bucks and Terrific’s jacket was ingeniously sculpted to not hinder any of it. 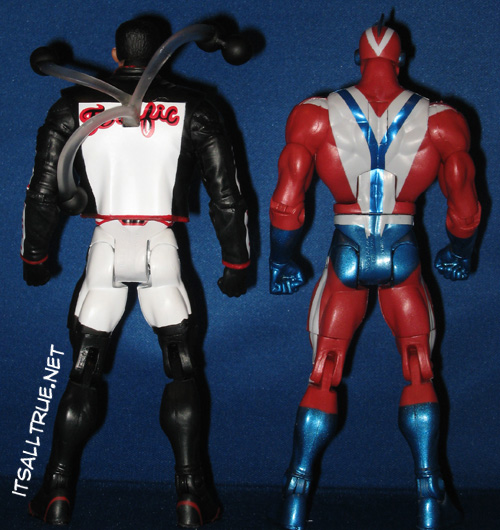 When it comes to paint apps, these were two difficult figures for Mattel to pull off. Commander Steel’s costume features a combination of metallic blues and whites over the red-molded body. For the most part the lines are smooth, but there are a few places where the painted lines don’t quite connect and leave a bit of the buck body showing through. Mr. Terrific’s paint apps don’t have that problem. The red piping and silver zipper on his jacket, the black/white lines on his costume, and the infamous “Fair Play”* on his sleeves are all painted very solid with hardly any slop.

* – There are some folks who think his sleeve slogan is silly, but I’m not among them. I love his costume from his T-Mask down to those strange red lines on his boots. 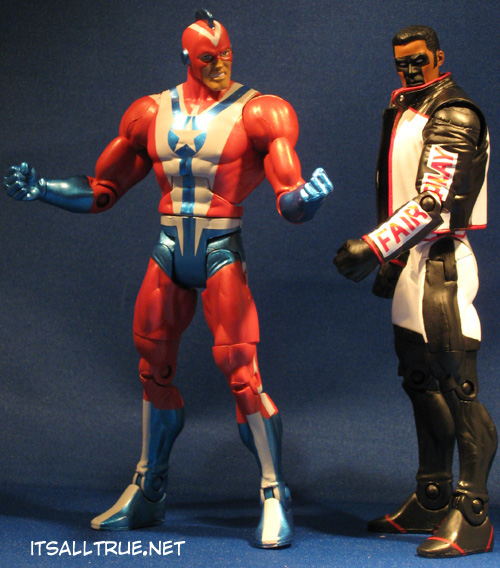 For accessories, Mr. Terrific included the T-Spheres attached to his back. On mine they are removable, but like Booster Gold before him, I’ve heard some folks have gotten him with the T-Spheres glued in place. I like the T-Spheres in the comics and they’re generally always floating around him, so I’m happy to see them on the figure. I wish they’d been done differently though. I don’t like the two spheres kissing over his right shoulder. And, the fourth sphere gets a little lost behind his left arm. I’d’ve preferred to see just three spheres, all separately floating above his shoulders. As such, I choose to display the T-Spheres alongside my figure instead of attached. The only drawback of the attachment is the hole it makes on his jack where it should say “Terrific”. Finally, Mr. Terrific came with Giganta’s right leg and Steel with her torso. 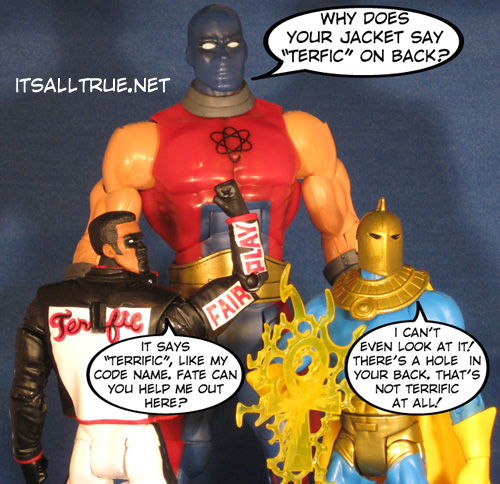 Overall, these are two more solid figures in a great line. Distribution is still an issue, since these figures were released online nearly three months ago and just now might be showing up in stores. I haven’t heard of any major joint issues since wave five, so we’re back to Mattel and the 4H putting out quality product, just not enough of it. Commander Steel is a great rendition of the retroactive Golden Age character (he was created in 1978), but his obscurity does tend to see him put towards the back of my shelf. Mr. Terrific, though, is front and center waiting for more modern JSA greats such as Dr. Mid-Nite, Sand, and Starman VII to join him.