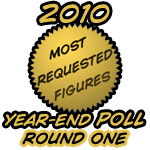 Last year, our readers voted DC Comic’s Mera as the Most Requested figure of 2009. This week, DC Direct announced a Red Lantern Mera figure in their Blackest Night line. Coincidence? We don’t think so! And while we’re still waiting for a proper Mera to find her way into DC Classics to cross her off our list, we’ll be looking forward to picking up DC Direct’s Red Lantern Mera this winter. Around the time she’s expected to arrive in stores, we’ll be voting on the 2010 Most Requested figure. But, we can’t get there without some finalists. Today, we’re asking you to pick the first three.

Based on your e-mails and feedback, we selected twelve characters/properties for Round One and have featured them in this column since the beginning of the year. Today, it’s time for you to decide which of those twelve should make it to the final three.

Before we get to the poll, here again, are the twelve first quarter nominees.

For Round One, you’ll choose three of the above nominees (or a write-in candidate) to advance to the year-end finals this December. Voting for this round will continue until 11:59pm CST, Thursday, April 29th. On April 30th, we’ll reveal which three finalists your votes sent to the next round of IAT’s 2010 Most Requested Figure.

Finally, there is one ground rule in our Most Requested Contest. The figure still must require a request – they can’t be announced or scheduled in anyway. If any of the nominees you send to December are included in an announcement before the finals begin, they’ll be disqualfied and the next in line will take their place.

You can choose any three. If you want to choose three write-ins, simply write-in three characters (along with the company/line) separated by commas. If you choose write-ins, you should take a minute to campaign for them below and hopefully sway others to your cause!

Thank you for your participation and be sure to check back on the 30th to see which three made the finals!

33 thoughts on “Most Requested Semi-Finals, Round One”