This suggestion comes to us from IAT reader, Adrian. So a quick thank you to him and an encouragement to anyone else with a character for this article! We will read them, and though we can’t do everyone, we do appreciate hearing your ideas! If you have a suggestion for the Most Requested feature, drop us a line and let us know!

If you’ve been around the blog long enough, you might know I really like alternate superhero costumes. I don’t know what it is, but there’s just something about a superhero switching up his costume now and again that appeals to me.

I’ve always loved the symbiote costume more than the traditional blue/red on Spider-Man. I found electric Superman a welcome break from the norm. I think the War Machine armor is cooler than most of the regular Iron Man armors. I really enjoyed Kyle Rayner’s unique GL costume and I’m always interested in how newly introduced GLs look. And finally, while it’s hard to say anything bad about the red, white, and blue of Captain America’s traditional costume, I’ve always had a soft spot for the black version, usually worn by U.S. Agent.

When I read Adrian’s e-mail, I knew this was the direction I wanted to go this week. I’m always a little hesitant with the superhero characters because we don’t want to feature one too obscure or one that would become a big heavyweight into our poll. But I think U.S. Agent is in that happy middle-ground between those two extremes. Plus, I want one. But more than that, U.S. Agent has an interesting toy back story. He’s had four figures if you count the minimate and the SHS. Of the two full size attempts, both from Toy Biz, one was a joke and the other one was a disaster. So, while there are tons of Marvel characters still waiting to gain entry into the exclusive “Legends” club, today’s the day to make the case for U.S. Agent. 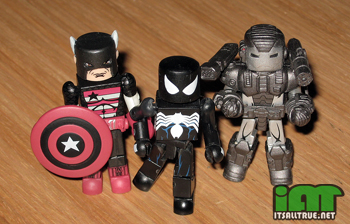 Before we get to deep into talking about U.S. Agent, we should point out that we don’t need a figure of him per se to get him in figure form. The black version of the Cap costume was first worn by Captain America himself when he resigned from his position and became “the Captain” in 1988. John Walker replaced him as the new Captain America and after that storyline wore out, they basically switched places. Steve Rogers was once again Captain America and John Walker donned the tossed out black costume as the U.S. Agent. So, it wouldn’t be totally wrong for Hasbro to simply release a black version of the suit and call it Captain America. It’d always be John Walker to his fans, but I bet they’ll take what they can get.

U.S. Agent has a wonderful bio on the Marvel website, so I’m not going to go full throttle into that here. Basically, John Walker is a bit of a screwed up character. I don’t blame him or even the writers that have used him in the past for it though. He was conceived as a temporary replacement for Cap and it has been a struggle for his character to gain independence from that role. John first appears about a year before being given the Captain America job as the Super-Patriot, a corporate hero that was in deep debt to a villain that had given him super powers. They played him off Cap for a year, then made him Captain America for a year, and then gave him Steve’s leftovers once the story arc was said and done. He appeared a few more times in Cap’s book. He appeared in West Coast Avengers as their “Cap”. He was in ForceWorks for awhile too. He also got beat up a lot, almost killed, had to wear an exoskeleton, got shot in the butt, sent to be the Captain America of Canada, etc. Sometimes it seemed if there was something a writer wanted to do to Cap, but couldn’t, they would do it to U.S. Agent.*

* – Except for the exoskeleton thing, that was all the rage apparently. They both had to wear one in the 90s. 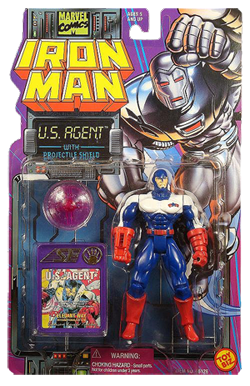 Despite his living in the shadow of Captain America, U.S. Agent has made it to store shelves three times (I know I said he had four figures. Don’t worry we’ll get there). The first was back in the early 90s as part of the vast Toy Biz 5″ line. You can see a picture of him in the second photo on the top row of our graphic. I have this figure somewhere in the toy cellar, but it’s a joke. It’s a repaint of the Captain America. This would be fine except that the scales and the star symbol were sculpted on the Cap figure and are visible underneath the paint apps on the U.S. Agent. I really hate that figure.

The second figure pictured at right was a real source of irritation for my youth. It was slated to appear in the Toy Biz Iron Man line in the mid 90s. Not only was my long awaited update of U.S. Agent given his ugly ForceWorks costume, but then they didn’t even bring him to market!

But it wasn’t the last we would see of the sculpt. It was planned for use again as the Living Laser, before he too went unproduced. The body finally did make it to market, as Astral Armor Professor X.* The muscular body was molded in clear fuchsia and given a tiny Professor X head (also in clear fuchsia) along with the metal armor intended for the Living Laser. It was horrible and amazing at the same time. Finally, and I don’t know the full story, some U.S. Agents were produced for overseas sales (that’s what is pictured at right). They weren’t Toy Biz sanctioned, I believe, and Toy Biz put the kibosh on them once they discovered their existence.

* – That Professor X is also in the toy cellar, though I might be too ashamed to go look for it.

Then, there was Marvel Legends, a line that redefined how companies handle action figure lines. While Toy Biz produced over a hundred Marvel characters in action figure form, they never revisited U.S. Agent – not even as a repaint of any of the Captain Americas (who didn’t all have sculpted details). During Hasbro’s stint, U.S. Agent was put in the Super Hero Squad (as a Cap repaint) and made it into the rumored list (even getting a UPC code in some instances) for the Target exclusive Red Hulk wave. When that wave was announced, however, only five of the six figures were correct – U.S. Agent having been replaced by… Wolverine #3,457.

That was in 2008 and U.S. Agent seems even more unlikely given the current state of affairs of the Marvel Legends line. He didn’t even make it into the poll of characters at SDCC. Still, Hasbro assures us that Marvel Legends isn’t in trouble. And with Toy Fair this weekend, maybe we’ll see something about the future of the line there. And who knows, maybe, just maybe, they’ll be room for U.S. Agent in those plans.

Update: It’s fair to say that U.S. Agent is one of my most wanted Marvel Legends, if not my No. 1. But which character is your No. 1 request for the Marvel Legends line? We’ve created a simple write-in ballot for you to tell us – the only rule is he/she can’t have been made before (Deadpool need not apply). Simply select “other” and type in the name of your pick – we’ll only take the first one named so make it count! And because the poll requires more than just an “other” box, there are two additional options if you don’t want anymore Marvel Legends: 1) if you’ve made the switch to Marvel Universe or 2) if you don’t but Marvel figures at all. Choose wisely!

We’ll feature the winner of this poll in a future Most Requested article and then they’ll be eligible for our 2010 Most Requested Contest. Thank you for your participation!