I got a surprise last week while checking e-mail. BigBadToyStore informed me that they were fulfulling my pre-order. I didn’t remember pre-ordering anything from them recently, so you can probably understand my confusion. When I checked my account, lo and behold, I realized what had happened. Yup, a year ago I put my order in for the Luthor/Supergirl two-pack in the hopes that the accessory would be awesome (as promised by Matty) and that it would help ensure the Golden Age Hawks 2pk. Well, that Hawk 2pk is still not in the works and when Matty told ItsAllTrue.Net that the accessory would be four colors of kryptonite, I took note, but had forgotten entirely that I still had it pre-ordered. 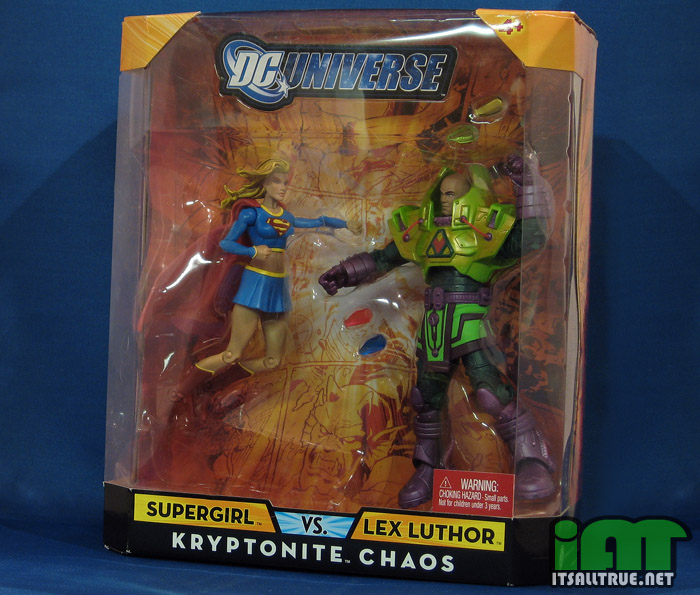 So I have this two-pack and I have to review it since Noisy didn’t want to. He was nice enough to snap some pics for me at least.

Let’s start with Lex Luthor. There’s nothing new here with Lex that we didn’t see on this figure’s previous incarnation in the DC Superheroes line. Everything’s the same with the figures design, even down to his backwards Mr. Freeze boots. The only change comes on the figure’s paint job. For some reason, they highlighted the upper parts of his armor with this funky reddish gold color. I’m not really sure why. The really strange thing is that the more I looked at it, the more I begin to like it. Maybe all that kryptonite is getting to me. Finally, even those this Luthor appears to have no new parts his head movement is better than the original. This Luthor can look up and down slightly. 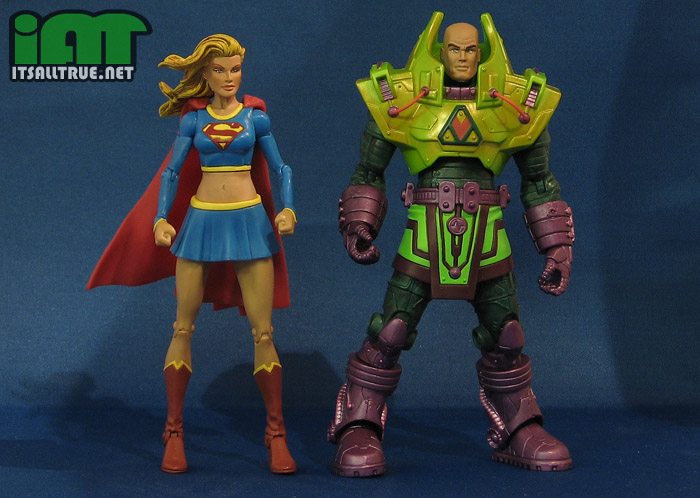 Speaking of kryptonite, you don’t get enough in this set. To me, when you call something Kryptonite Chaos, it better come with enough kryptonite to choke a superhorse. This set only comes with four pieces of the deadly K. Maybe that’s enough for some people, but not for me. Not when there are at least eighteen different forms of kryptonite in the DC Universe. Now, if this set came with eighteen pieces of kryptonite, that would be true chaos. And it’s not like it would have been impossible, they were all the same mold, taken from the DCSH piece. Eighteen pieces, that would have been truly awesome. But no, we get four. Blue, which only affects Bizarro. Red, which has random effects. Gold, which robs a Kryptonian of their powers. And then there’s the good old Green, which is actually a lighter shade than the previous piece that came with the first Luthor. 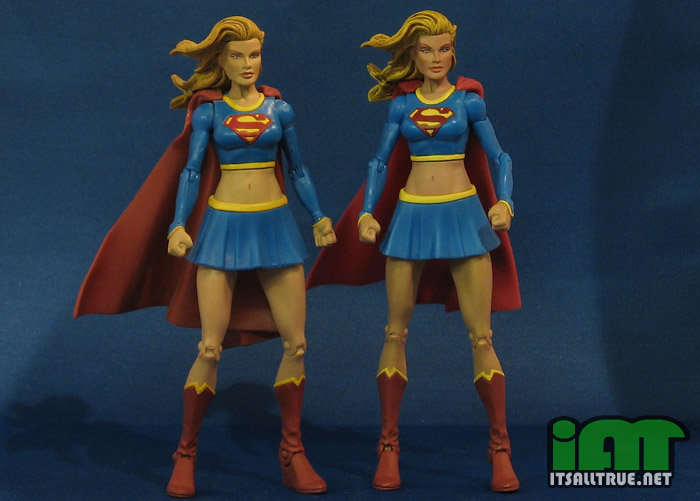 Even if eighteen pieces might be too much, they could have at least added one more, black. Black is pretty new the Superman mythos, but it’s one of the more important kryptonites. Not only that, but it would have fit perfectly into this box set because of our next figure. 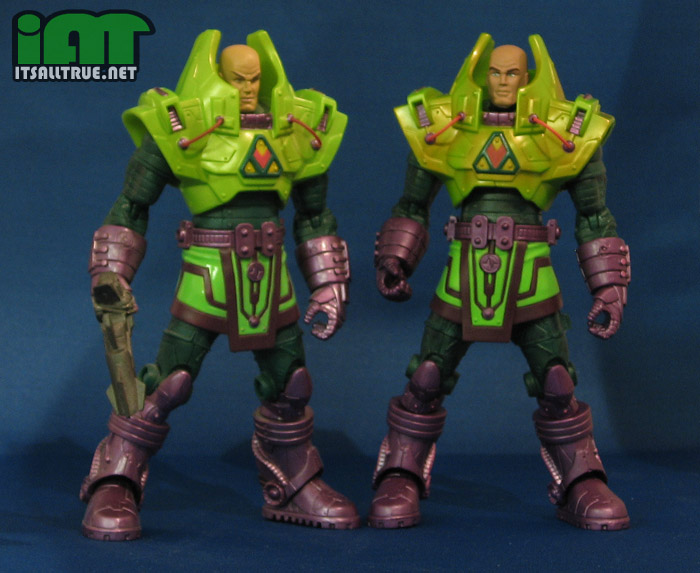 Supergirl. Again, this is the exact same mold as the DC Superheroes figure, which I find disappointing. I realize that most of these two-packs are just repaints or exact reissues of previous figures, but I’m not a big fan of that. At least unless the repaint actually makes the figure different. Therea are paint differences, but they’re in details that don’t create a lot of difference. Her cape and symbol are a brighter red (but her boots aren’t). Her hais is more blonde and she has more makeup on.

They could have done one of two things to Supergirl to make this two-pack better. What I really would have liked to see is Mattel sculpt a new head and repaint the body into Linda Danvers from her early 1990’s look. Not only would this give us a new figure, but it would also help finish off one of the few Reign of the Supermen characters they haven’t gotten to yet. 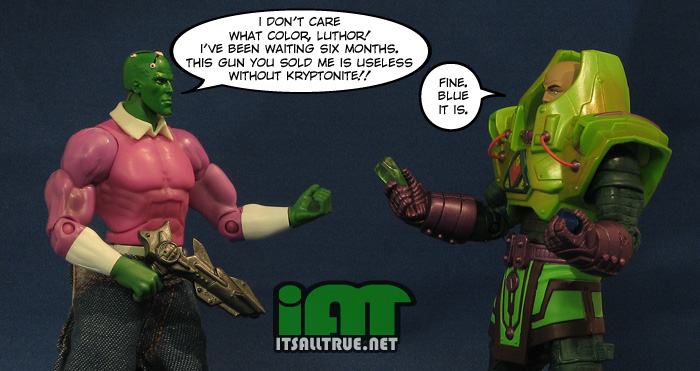 Something else I would have liked to see instead is the evil Kara from when Lex Luthor exposed her to black kryptonite. Not only would this have been just a cheap repaint, but it would also fit with the two-pack’s theme of “Kryptonite Chaos”. But alas, no evil Supergirl. No eighteen pieces of kryptonite. Even Lex Luthor was shorted his original gun. You know, the one that now comes in the Brainiac two-pack? 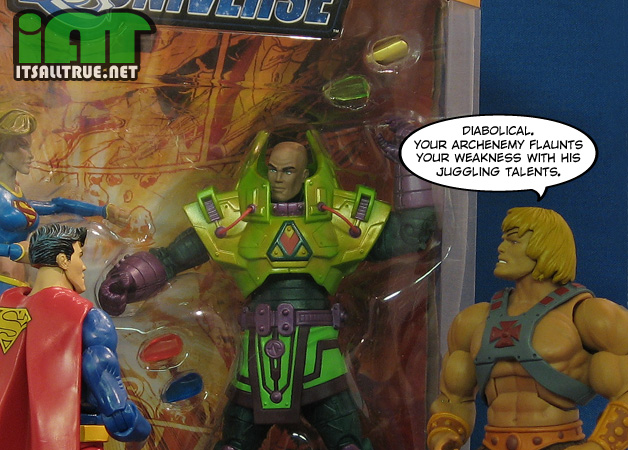 I know what you’re thinking, “why should I even bother?” Well, the quality control on this set is good. There are no real problems with the set. Even though there isn’t enough kryptonite, the four pieces it comes with are cool. And, of course, the main reason this set exists is for the fans that missed out on these two figures the first time.

And people who forgot to cancel their pre-orders.