This suggestion comes to us from IAT reader, AllMindsAboutEverything. So a quick thank you to him and an encouragement to anyone else with a character for this article! We will read them, and though we can’t do everyone, we do appreciate hearing your ideas! A link for submissions will follow at the end of the article and we’ll try to remember to include that every time going forward.

Now, I have to admit upfront that I’m not a big Power Rangers fan. I’m not down on them. I could say that I’m too old – I was thirteen when it started and the ship sailed without me. But being old isn’t a defense since some of the older IAT writers, Rant & Vault specifically, are older than me and they both love it. Enough that I’ve sat through many plot recaps and discussions about a show I didn’t want to watch! Still, they loved it, they’re my friends, so I have respect for it even though it’s not something I care about.

As a toy collector, I can not deny the brand that is Power Rangers though. Make of it what you will, but those toys have held onto their four feet of pegspace for so long that plenty of my favorite lines have lived and died next to them at the store. Seventeen years – that’s staying power. Since I wasn’t paying close attention to the toys, I assumed that Bandai had made just about every character. I mean, I know some character inevitably gets skipped, but AllMinds informed me that there isn’t a Rita Repulsa. That blows my mind.

If you’re not familiar with Power Rangers, Rita Repulsa is THE villain. There have been plenty of bad guys in their seventeen years, but she’s their main foe for the first three years (appearing in 119 episodes) and then making return appearances sporadically throughout the subsequent series. This is Transformers without Megatron. The X-Men without Magneto. The Joes with no Cobra Commander. A toy line without the main villain for seventeen years! Can you even imagine? I say that’s well worth our attention.

I meant to ask Rant or Vault to do this article. Honestly, I can’t tell you a lot about Rita other than what I’ve gleaned from them over the years, but I’ll do my best to give her the proper write up.

I can tell you that Power Rangers fans agree with me about her being the main adversary. She won a poll in 2006 that set out to discern their ultimate villain. Lord Zedd, you might remember him – he’s the skinless dude that wears a metal exoskeleton and has more than a few figures – came in second. Apparently, a skinless dude is cooler than a woman figure several times over.

Is that what’s at play here? Is Rita being ignored because she’s a woman? We established that her husband, Zedd, has figures. So does her brother, Rito, and her father, Master Vile. The movie villains, Mordant and Ivan Ooze, have toys. Rita’s lackeys Goldar, Finster, Baboo, and Squatt all have toys. But her female lackey, Scorpina, suffers the same toy-less fate as Rita. Boiled down – every major villain (and plenty of monsters – Slotsky anyone?) from the original incarnation of the show has been made into a toy except for the two female villains. I hate that. All toy collectors should hate that. Even if you don’t like Power Rangers, make sure to share your condolences the next time you run across one on the net. It looks like they’ve been bedeviled by the “villains don’t sell” and the “women don’t sell” rules for seventeen years now.

There was hope for a Rita figure at one point. I can’t find the exact year, but both Scorpina and Rita were shown during Toy Fair before being canned from the assortment. From what I’ve gathered, she didn’t meet safety standards because of multiple sharp points and/or small parts. I’m not sure. To add insult to injury, eagle-eyed viewers of the show were able to spot the unreleased figure as a cake topper in the episode where Lord Zedd and Rita got married. I’m sure that felt good. 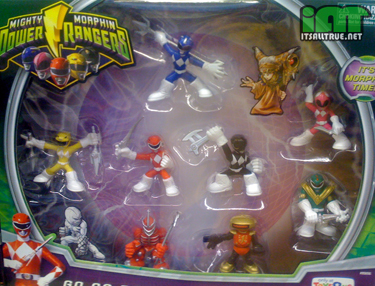 In the ensuing years, the toy line has gotten more female friendly. There have been plenty of female ranger figures since then. The villain Divatox even saw release in the Turbo version of the toy line. Still, with the recent Legends releases (which included a Zedd), Bandai hasn’t revisited Rita Repulsa. This brings us to today and the newest blow to Rita fans.

We’re in the middle of renaissance of the original Mighty Morphin Power Rangers right now. I see a couple different scales at the store while I’m looking for DC Classics. And in those scales, I see the rangers, the villains, and the zords. But I don’t see Rita. The reason for this is simple – they snubbed her. Again.

My favorite part of this story is a call I got from Rant a week or so ago. He had run across a TRU exclusive 8-pack of squashed down Power Rangers. It’s pictured here for you. You see, it includes the original five Rangers, the Green Ranger, their robot Alpha, and their second most important villain, Lord Zedd. But you see Rita too, don’t you? She’s artwork (as is the Putty). They went to the trouble of drawing up a squibbie Rita Repulsa and gluing it to the front of the package – you know, instead of including her. Suffice to say, Rant was not pleased. There was much cursing on that phone call. And while I found it amusing, I feel his pain. Quite simply, that sucks.

Bandai, I forgive you for not making those awesome Teen Titans Doom Patrol figures you showed. Mattel is onboard with comic versions, so you’re off the hook now. But not making a Rita in seventeen years has got to be one of the top ten worst oversights in toy history. It’s so crazy, that I still have a hard time believing that you actually did it. If you don’t take advantage of this popularity swell as you sell all these original figures in this new scale and make a Rita, I don’t know if you will ever get the chance. It’s now or never, Bandai – make Rita Repulsa.

Got a suggestion for the Most Requested feature? Drop us a line and let us know!