Sometimes as toy collectors, we can look across our displays and, no matter how many toys we have, only see the ones that aren’t there. They are the missing figures. The characters toy companies never got around to, never thought were important enough, or worse – the figures companies felt the need to show us at comic-con in the “We’re Never Gonna Make These” case…

The second entry in our 2010 Most Requested Contest is for a television character very near and dear to everyone at IAT. I personally, have been a big fan of his ever since I was a kid.* I remember him from Twin Peaks, Nightmare Cafe, A League of Their Own, Cliffhanger, Needful Things, and, of course, the Stargate franchise. You might say that it’s odd for an actor who spent so much of his career playing key support roles to draw my attention – but I’ll tell you two things. We share a birthday and he’s from my home state, just a few towns over to be exact. When I was a kid, those were both a big deal.

* – though as a kid I often confused him with MacGyver’s Dana Elcar.

** – I loved Nightmare Cafe as a kid. It might be my first experience with the NBC cancelathon of my favorite shows. It may be awful if I tried to watch it now though, who knows.

I loved the Stargate movie as a teenager and it’s still one of my favorites. A few years after, when I heard about a spinoff show Richard Dean Anderson as Jack O’Neill (two L’s), I was ecstatic. That Don S. Davis would again play an Air Force General, this time General George Hammond, was icing on the cake. And like any good toy collector, I was going to need toys of everybody…

Well, suffice to say the toys didn’t come right away. The show went eight years with barely any merchandise at all. By that time, I’d drawn almost all of my friends into watching the show regularly on Fridays and we had lamented the lack of toys on most nights. Around the ninth season, Diamond Select Toys grabbed the license and started making toys. Finally, we though, Stargate would have its proper presence on the toy shelves. But the truth is, it was probably already too late.

I’m not sure how many Stargate SG-1 figures there are overall. I’d guess somewhere between 30-40 and most of them are variants of the main characters. DST did a decent job at first. The head sculpts were good, the articulation was good by the second wave,* and most of the figures really weren’t that hard to find. A second wave followed that same year, a third wave in 2007, a fourth wave in 2008, and a fifth wave was scheduled in 2009. That fifth wave is the one we’re here to talk about today.

* – for some reason, they skipped hinged knees on the first wave.

The first two waves sold well and quickly gave us most of the main cast of the show. But SG-1 ended in early 2007. The franchise went on, but as is the case with most licensed properties do the figure sales started to sag after the show went off the air. Wave three, which included Farscape refugees Mitchell (Crichton) and Vala (Aeryn Sun), languished here on the pegs until they went to clearance. Wave four, I believe, is still at the store where I first saw them two years ago. That wave was the original SG-1 crew in desert camo. Things looked bleak for the line after that wave crashed. And, sadly, there was one major character still missing from the shelves: General Hammond.

General Hammond wasn’t just wonderfully portrayed by Don S. Davis, he was written well too. He was a great blend between a career military officer and a caring parental figure. The writer’s continually put him in situations that required tremendous calmness when dealing with the frustrating habits of his subordinates. He knew when to speak softly and he knew when to yell. And like every good boss, he was there for his team. While they stopped otherworldly threats, he kept the pressure from above off his men. And sometimes, he’d actually get to leave Earth and deal with a problem. Those were great. I still smile thinking of those moments where the character really shined. Heck, I smile when I think about his most uttered line when sending people on missions, “you have a go”.

Fans made DST aware of the desire for a Hammond early on when the Q&A’s began. In August 2008, a Hammond was requested in the second Q&A. Requests showed up again in September and November. Those requests were answered at last year’s NYTF. Wave five was shown and it would include General Hammond. There was much rejoicing. It’s been nearly a year, and it turns out that DST committed the second unforgivable sin* in a Most Requested article. They showed us something that they never got to market.

* – The first unforgivable sin is showing us a figure after the fact. A “we were going to make this, but not now” figure. 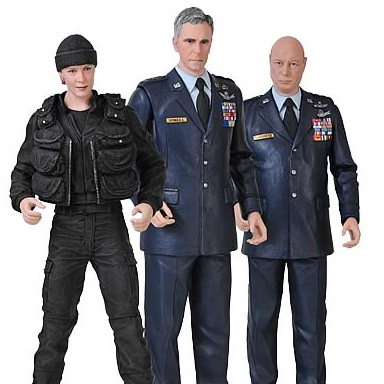 Now, we at IAT know that there all sorts of factors that can prevent a figure from making it into our grubby hands. And we know that DST, as a smaller company, is more prone to those factors than most companies (and boy does it…), but we don’t care. If we can’t have it, well, frankly, we never want to know it existed. It’s easier for us that way. And yes, we’re mad at all those Stargate fans that passed up the prior toys too – because that was us.

We tried to stay interested, but the length between releases, the show being off-the-air, the constant decos of the same characters, and other factors all caused us to lose interest over time. At IAT, we all bought wave one and two completely. We bought the case toppers, the FCBD figure, the mail-ins, all of it, at first. By wave three, we started to get burnt out. We wanted Hammond, but I wasn’t keen on having two Valas, Mitchell, & Daniel as whatever. None of us bought the mismatched desert camo figures in 2008. For us, the wave four Jonas Quinn, another fan request, was the last one. I can say now, that I’d have bought them all if I thought we’d get this close Hammond and lose it, but it’s too late.

While we’ll share some blame for the fan-side of things, DST is responsible for their part too. It’s nearly impossible to complete any of the sub-teams in the line. They just didn’t get around to them. Out of the four needed to complete any set, there are three Black Ops,* three t-shirts, two blue base uniforms, and 1 green base uniform. The Desert Camo figures aren’t all compatible because some are sporting t-shirts while others are in there gear. It made no sense. We didn’t really need a t-shirt sub-set, by the way, but we bought them. And of course, the company is the one that ranked Hammond’s importance behind Mitchell & Vala. They were mostly reused bodies, so I understand that. But then there was Replicarter, Thor, a nameless Ori Prior, Anubis, and all-new one-off sculpt for a second Vala, and possibly more that I’m forgetting. I get spreading things out, but you can’t spread them farther then the line will live or you end up with a ton of incomplete toy shelves.

Throughout 2009, DST was asked about Hammond. You can chart the waning enthusiasm as the year dragged on. In February & April, things were hopeful. By July, the month of scheduled release, things were quiet. In October, I finally lost hope when DST Chuck said “I’d have liked to do General Hammond.” Finally, just last month, the fifth wave was said to be “no longer in active development but we’re not 100% ready to say it’s canceled”.

But General Hammond is desperately in need of a figure. My SG-1 shelf will be forever short without him. Sure, it’s held down by the original team and the three fill-in members, but there is a spot missing and it’s reserved for General Hammond. He may not have gone on the missions, but he’s an important part of the team. Think of a Doom Patrol without the Chief or X-Men without Xavier. General Hammond is part the team. He’s the boss. SGU comes back in April. It’s a good show, perhaps better written then some of the best seasons of Stargate SG-1. I’m hoping it can bring some life back to the franchise and get some figures of its own. If it does, I hope DST can sneak General Hammond in there somehow. It’s well past time for DST to tell him, “you have a go”.