So, I have to fess up. I wasn’t terribly excited for DCUC12. There were a few reasons. Only a couple characters were shouting out to me. I wasn’t excited as the prospect of a huge Darkseid. I didn’t know how cool the Four Horsemen could make a Metal Man. Well, it’s been nearly half a year since I expressed my doubts about DCUC12. I’ve had the figures for about a week now. Was I impressed? Did I change my mind? You’ll have to read on to find out. First up is Doctor Mid-Nite & Copperhead. 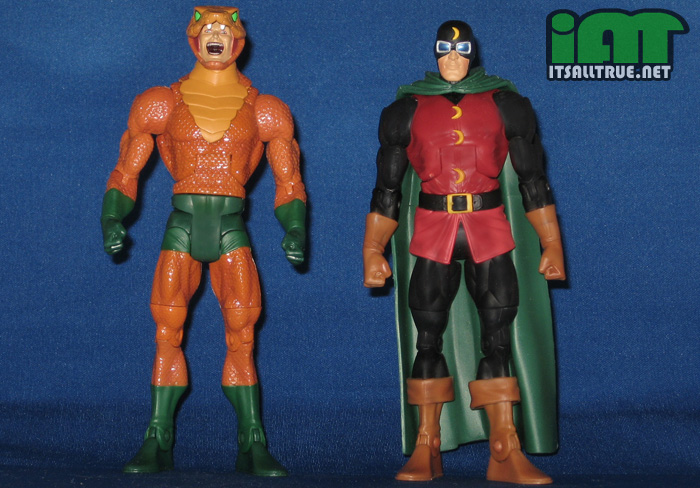 I put these two together because they were my most wanted and least wanted characters when I first heard the lineup. Doctor Mid-Nite is a longtime favorite of mine and Copperhead is… lame. But, the Four Horsemen generally impress when it comes to the lamest characters so I had some high expectations for both.

For those not familiar with the characters, Doctor Mid-Nite is the first blind superhero. He was created in 1941 by Charles Reizenstein & Stanley Josephs Aschmeier. A surgeon, Charles McNider was removing a bullet from a mobster-turned-witness when the mob made their second attempt with a grenade. The resulting explosion killed the witness and blinded McNider. He gave up on life until an owl came crashing through his window (that happened a lot back then, apparently) and he discovered that he could see, but only in perfect darkness. He took the owl on as his sidekick, Hooty, developed goggles that let him see normally, some blackout bombs that would create darkness, and took the name Dr. Mid-Nite. Honestly, he was always a bit of a background player, more known as a member of the JSA than any solo story, but I liked him. He was killed by Extant during Zero Hour.

Copperhead, all things considered, is an obscure comic villain created by Bob Haney and Bob Brown in 1968. He first appears in the pages of Brave and the Bold where he’s a contortionist-turned-master-thief that embarrasses Batman so much that he crafts a plan to defeat Copperhead by (deep breath…) having Wonder Woman and Batgirl pretend to fight for Batman’s affection so that Copperhead will think Batman is too busy to hunt for him.* Batman is so consumed by getting even with Copperhead, that he pulls out his brooding pipe** and the smoke forms into a copperhead snake. Now that’s willpower! The story gets really interesting when both women actually fall in love with the Dark Knight! Doh!

* – Bob Haney stories are great. Batman painted a mustache on the Mona Lisa in the previous issue.

After hilarity had ensused and Copperhead was caught, he went largely unused until he was added to the Secret Society of Super-Villains in the late seventies. The book didn’t last long, but it really made an impact on that generation of comic book fans and are probably his most notable appearances. He went unused again for most of the eighties and nineties, but started showing up more in recent years including appearances on JLU and Brave & the Bold. Copperhead was killed by the newest Manhunter in her solo series to show that she meant business!

And since both of these guys are dead, they’ve both reappeared as Black Lanterns.

Dr. Mid-Nite has a lot more original parts than I expected. In addition to the head and cape, the upper and lower torsos are new pieces with the hemlines and moon clasps sculpted on. The tunic look is finished off with a soft plastic piece that fits over the crotch. It’s been done so well that, articulation aside, the figure’s costume looks seamless. I love the cape in particular because it’s bunched up around the neck and it drapes straight down. It just screams Golden Age to me. The head sculpt is solid with all the right details too.

Copperhead also required a lot of new parts. The shoulders, biceps, and torso pieces are all reused from Aquaman, but all the other scaled pieces are new: calves, knees, thighs, forearms, neck piece, and head. The scales match and make for a great look overall. I don’t mind the bib piece sticking out, it blends well and I love the head sculpt. I’m usually against screaming heads, but this guy is wearing a giant snake suit. He’s obviously crazy and the crazed expression fits. One thing that might have added to the figure, though, is a tail. His costume doesn’t always have one, but I think a lot of fans think of him with one. I like the idea that the combination of his contortion ability plus his super-slick snake-suit lets him push through tight squeezes and slink around like a snake and he doesn’t need a tail to do that. On the other hand, a tail would really finish off his snake motif. I’m really okay either way. I don’t think it’s missing when I look at the figure.

Doctor Mid-Nite has an excellent paint job. Most of the pieces are molded the correct color and that always makes for a more vibrant figure. The few paint applications there are, like the moons and the metallic paint on the goggles, are sharp. The figure captures the classic look really well.

Copperhead is a knockout in this department. The paint details on the face are some of the sharpest in the line, but what really makes this figure work is the high gloss paint on the scales. He looks slippery. Even better than just looking great, it makes it hard to tell that he reuses any of Aquaman’s parts at all.

Normally, we skip articulation, but Matty has promised us that wave 12 will see improved head articulation. The answer? Yes and no. Copperhead’s bib makes his neck larger overall, but the head still has good articulation! He can kick his head back decently and even has side-to-side tilt. When you tilt it back and have him look down at you, he looks especially crazy. I like that. Dr. Mid-Nite, though, is as bad as the worst neck articulation from waves nine through eleven. He’s permanently looking down and has nothing but side-to-side movement. Now, Matty said we’d see improved articulation and we have. We’re plus one/minus one. Mattel seems to be on the right track and we’re starting to feel like our persistance has paid off. But we’ll have to see more than a just a figure or two to declare victory.

First up, we get one real accessory in this wave. Hooty! It wouldn’t be Dr. Mid-Nite without his trusty sidekick. Hooty is well-sculpted, well-painted, and has one articulation point at the neck. He’s cool. He also fits very snugly on Doc’s arm. The best owl accessory is still the DCD version of the modern Dr. Mid-Nite. He had a magnetic panel in his arm and Hooty attached via magnetism, but the clip-on one is better than the DCD GA version which had to have a second glove with him sculpted on.

Do we count the buttons as accessories? Man, I don’t know. To Rant, they’re garbage. Vault and I are a little more accepting of them. We all agree that we’d like to get some more DC artifacts into the line instead of buttons. In an interview at AFI, the Four Horsemen said they’ve sculpted extra accessories that Mattel cuts due to costs. The Kandor that comes with this JLU Superman was originally sculpted for DC Classics before finding a new home, but the parts usually end up in a bucket according to the Four Horsemen. I cried nerdtears and flooded the world when I heard that. We had just asked Mattel about doing dual-use scaled accessories, but they didn’t understand the question. Sigh. Moving on…

Regardless of their accessory status, my plan in these reviews is to name the artwork used on all the buttons, but I’ve hit a bump right out of the gate. I can tell you that Dr. Mid-Nite’s button is the classic cover to All-Star Comics #8 by Everett Hibbard, it’s the issue where Dr. Mid-Nite “wins his spurs” and gets to join the JSA. Copperhead’s button has eluded me. I look at it, and I feel like I should know it, but I just can’t put my thumb on it. If any of my readers can tell me, I’d be grateful. My nerd badge is a little tarnished, I know. Also, I’d like to thank Batman up there for holding the buttons since both these guys have double fists.*

* – Is Batman really that intelligent and cunning or is he just tough to beat because he can, y’know, hold things?

Overall, I’m happy with my first two DCUC12 figures. I see a lot of new parts between them and the neck articulation has been improved on one, so that’s a definite plus. Accessories were weak for these two. Hooty is nice, but he was more or less required. Still, they are two more sharp figures for the DC shelves. More villains are always welcome and Dr. Mid-Nite brings us all one step to closer to a complete JSA. You can’t go wrong there.

Where you can wrong is the price. These were the first figures that I had to pay $15 for and I don’t like it. Mattel added the buttons, but they don’t really increase the value. You want to celebrate the 75th anniversary? How about 75 DC artifacts in accessory form and some open hands to hold them? How about making sure the articulation is the best it can be? I don’t know if Mattel can make these really worth $15 – that’s a lot for a 6″ mass retail figure, but I’d like to see them try. 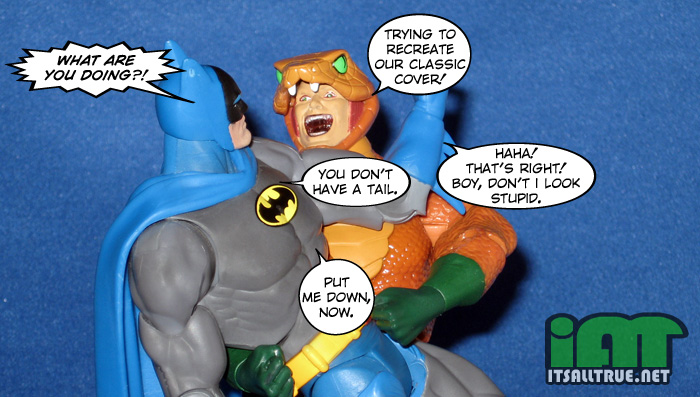