I was at Toys R Us the other day when the Toy Gods smiled down upon me. Noisy found a TRU Exclusive Batman, but, as usual, they had nothing I had gone there for (still can’t find that Arcee). Since they were resetting I walked around hoping for a surprise. I found it in the G.I. Joe aisle. The neon colors of Arctic Threat Doc caught my eye. Arctic Threat Doc and Shipwreck had appeared to fill the empty Joe pegs, and with snow on the ground I had to buy them. When I got home, these brave Joes ventured outside to see to the environment they were destined for…

I’ve always been attracted to Shipwreck (no, not in that way). When I was young, my knowledge of him came from the cartoon. So, although I didn’t know his back story, I did know he was some sort of sailor who wasn’t part of the military, yet he was so cool the military let him hang around anyway. That and he had a bird who wasn’t on the as annoying level as most other cartoon animal sidekicks. 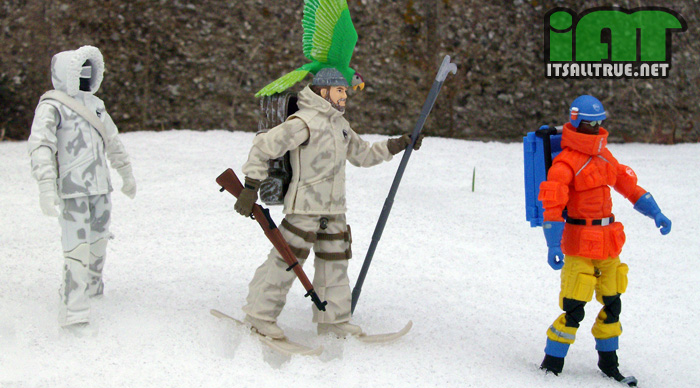 I really like this Arctic Shipwreck. There are not a lot of new pieces to him, but they did a really detailed job with what they had ready. One thing you will need to be careful of when you’re picking him out is the paint job though. I think I went through ten before I found one that had just enough white “ice” built up on his beard without making him look like an old man. Also, some of them had gray slop from his hat come down over the eyebrows. That was my biggest problem with this figure though; everything else turned out great. His pants are from the Ice Viper’s, but almost all Shipwrecks other parts come from ROC’s Arctic Snake Eyes. One of the interesting things is that he and Snake Eyes share the same jacket mold, all the wrinkles and folds match, except for the hood. Snake’s hood was sculpted up, while Shipwrecks is sculpted down. 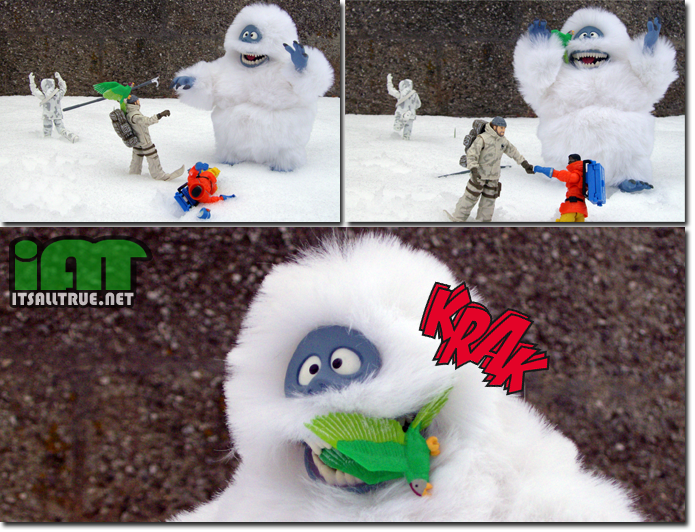 Shipwreck also comes with some great accessories. The best, though, is Polly. This is the same Polly mold we’ve seen before, but again they hit us with the details, and this version is an Arctic Polly with touches of “ice” added to the wings. This gives a really great effect, but I couldn’t help wonder why anyone would bring a tropical bird to an arctic battleground. Shipwreck also comes with a neat looking rifle, a long spear for hunting whales after Cobra’s been dealt with, and the same firing bazooka that ROC’s Arctic Storm Shadow had only in gray, and some really cool snow shoes that actually work in snow. (Notice how Shipwreck is able to stand higher in the snow than the other Joe figures?) My least favorite accessory of Shipwrecks is his backpack. It’s basically a large brown shell with “ice” paint on it. This is what Joe backpacks used to be like, but they’ve come a long way since. The upcoming Snow Job’s backpack can hold all his stuff, and I’m pretty disappointed Shipwrecks can’t do the same.

Next up is Doc. I’m not really sure what was going through Doc’s mind when he picked out his arctic gear for this mission. Doc is technically emergency personnel, so he’s trying to save lives and I guess he thinks he’ll be spared. The problem is, this isn’t the side of a busy highway, this is a battlefield, a mostly white battlefield. Bright colors and reflective patches (which actually do reflect) might keep you from getting shot by your own men, but I don’t think the B.A.T.s follow the rules of the Geneva Convention. Let’s hope there are no Arctic S.A.W. Vipers around…

Even if Doc’s uniform is a little strange, his accessories are well worth the buy. Doc comes with his helmet (which doesn’t like to stay on very well), ice shoes (which also don’t like to stay on), a medic bag, a flare gun, and a sort of hypo-spray type gun, a white stretcher with a blanket/tarp and his medical case/backpack. 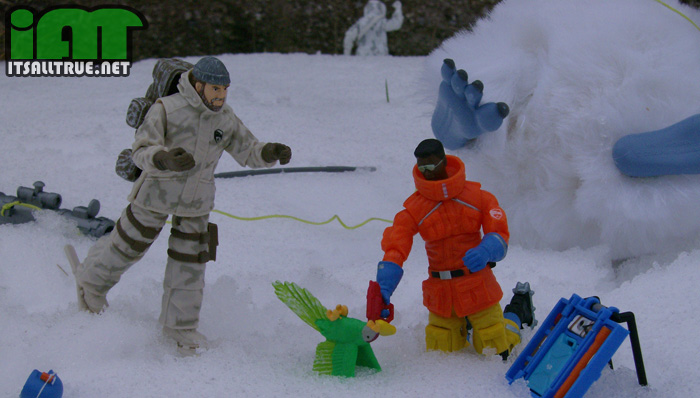 The backpack is the coolest part. You may recognize it, it was originally given to Firefly, but they’ve ingeniously repainted it to match Doc’s needs seamlessly. The red gas can has been repainted into a blue water can, and the time bomb has been repainted into a stethoscope sitting on some bandage wraps. They did an amazing job on this case. Even the outside shows an attention to detail. The letters that spell “RESCUE” on the case are in the same font as the “RESCUE” letters on Lifeline’s uniform. Very cool, and probably one of my favorite accessories. All together, even if you don’t like Docs choice of colors, he’s got enough medical supplies to cure a battalion. 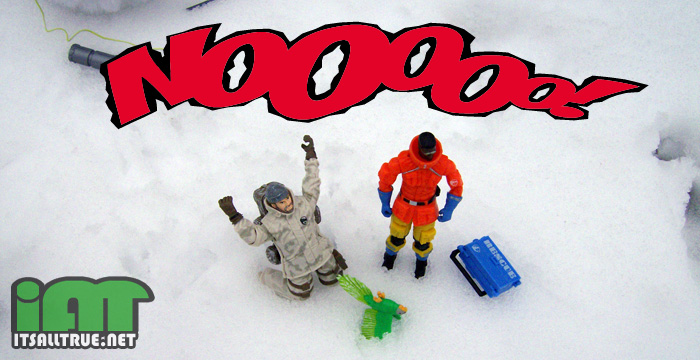 These two figures make a great addition to the Arctic Threat line. I can’t wait to add Duke, Snow Job, and the Ice Viper Officer to the ranks. 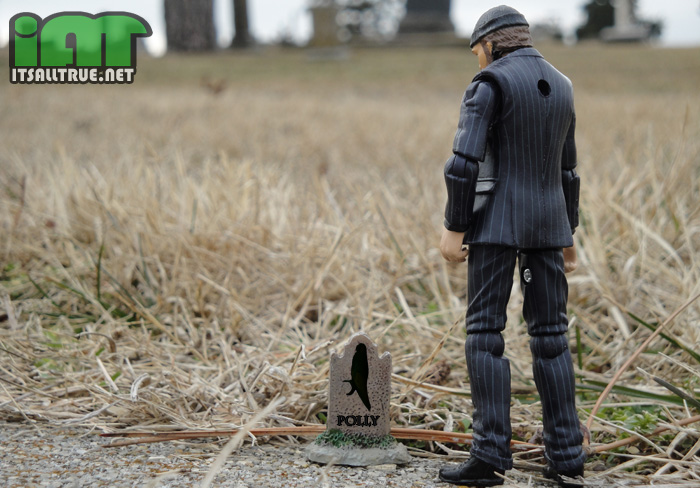