Early this morning on Facebook, Matty showed pictures of
Optikk in package along with our first look at his bio… 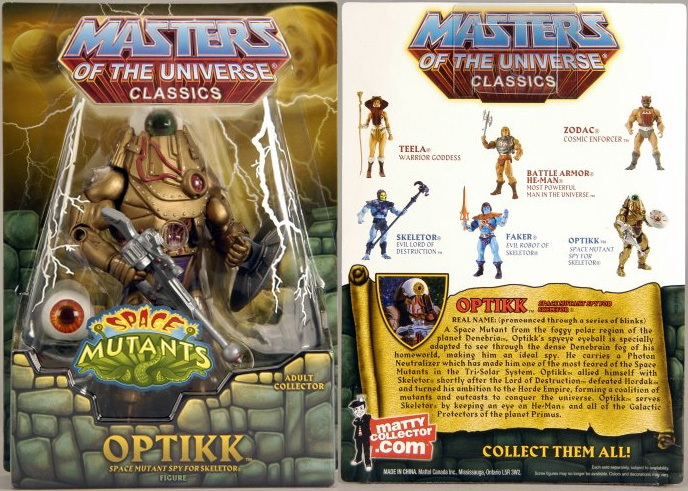 Real Name: (pronounced through a series of blinks)
A Space Mutant from the foggy polar region of the planet Denebria, Optikk’s spyeye eyeball is specially adapted to see through the dense Denebrian fog of his homeworld, making him an ideal spy. He carries a Photon Neutralizer which has made him one of the most feared of the Space Mutants in the Tri-Solar System. Optikk allied himself with Skeletor shortly after the Lord of Destruction defeated Hordak and turned his ambition to the Horde Empire, forming a coalition of mutants and outcats to conquer the universe. Optikk serves Skeletor by keeping an eye on He-Man and all of the Galactic Protectors of the planet Primus.

While this bio is pretty cool (I love that Skelly took out Hordak), it does borrow heavily from the original bio…

Evil Mutant Spy from the foggy polar region of evil planet Denebria. The Denebrian fog is so dense here that he has a spyball eyeball that sees through almost anything. His rotating spyball and his Photon Neutralizer weapon make him one of the meanest mutants in the Tri-Solar System.

Mission: To assist Skeletor and the rest of the Evil Mutants by keeping his eye on He-Man and the Galactic Guardians from planet Primus.

I can’t give out a ton of creativity points, but this is still one of the better bios!