I didn’t want to write this article. To turn the Most Requested feature into yet another referendum on the DC Classics neck articulation seemed like overkill. On Monday, we had plenty of comments about the lack of articulation question in our Ask Matty. On Tuesday, our very own Mr. Rant shared his opinions on the matter. On Wednesday, we poked a little fun at Mattel for removing the articulation. I went to the list of possible Most Requested figures and some caught my attention: a Lou Ferrigno Hulk, a good G1 Arcee, a Thundercats line. There are plenty of things on the Most Requested list, but right now, this week, the neck articulation is being talked about across the internet. If there was ever a time to rally and try to get the point across, it’s this week. So here it is. I don’t think there’s a DC Classics fan out there that would disagree that this is one of the biggest requests we need to ask for right now. Mattel, it’s time to fix the ball-jointed necks.

We’ve asked Mattel twice, as have other websites, about the missing neck articulation for wave 9 and 10 figures. All of the answers seem to indicate that Mattel thinks this is a special articulation issue. They liken it to the Green Arrow wrists – a case where they went above and beyond (which we appreciate) to make a good figure better. But fans know – fans can universally agree – that the up/down/tilt movement on the heads of DC Classics is not an instance of special articulation. First and foremost, though the range varies, nearly every figure from Wave 1 through Wave 8 has proper head articulation. Some figures have better range than others, but it’s there. Second, the figures from waves 9 and 10 are almost all blocked. From Wave 9, only Guardian has good range of movement. From Wave 10, only the repaints don’t suffer from this problem. Something somewhere has gone wrong.

Take a look at these two pictures:


First, a selection of figures from the first eight waves:

And now a selection of figures from waves nine and ten:

First, there’s a representative from each of the initial eight waves in the top picture, but most of the figures could have filled in for whichever figure we chose. Second and this is the important part: the figures in the bottom picture cannot replicate the movement of the figures in the top picture. Worse still, take a close look at the alignment of the heads on Joker, Wildcat, and Deadshot. Those heads are all tilted or posed off-center, you say? They’re not. They’re stuck that way.

What else we can say or do? Maybe we can talk money. If removing plastic from the heads will help the articulation, then we should tell Mattel that’s the case. They’re paying for that plastic after all. They’re spending extra money on extra plastic to block the articulation on figures. The same articulation they’re paying extra for the figures to have. If nothing else, that should be motivation enough. If the plastic that has to be dremeled off to make the head’s work was never there in the first place, how much money would Mattel be saving? Sure, it’s a tiny amount of plastic, but spread across hundreds of thousands figures? It will add up. A few years back, Coca-Cola saved millions by shaving five millimeters of aluminum off their cans.

I don’t know what else we can do to get the point across. We’ve asked the question twice and been rebuffed both times. We can keep posting on Facebook. We can keep submitting questions about the articulation in the Ask Matty editions. We can post about it on the various toy boards. If enough of us are talking about it, let’s hope that someone at Mattel will hear and get the upcoming figures to be as well-articulated as the earlier figures. They need to be.

One of our readers, xrmc20, posted an image on a thread at AFI about the removed articulation. While customizing a Romat Ru, xrmc discovered that a change has been made to the interior portion of the ball joint. It’s been changed from a double “barbell” to a triple “barbell”. 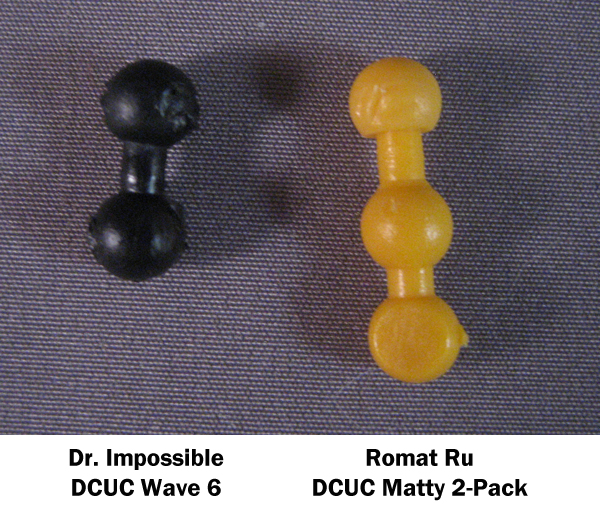 After taking a look at his picture, I needed to see inside the chests of the figures to see what was happening. For customs, I had a spare Mr. Terrific and a spare Robotman from waves eight and ten respectively. I decided to crack them open and see how the interiors of the chests were designed. Mr. Terrific, who has good range of motion, had a double barbell. The portion in the neck fits snug and allows for poses where he’s looking down, up, and with a slight tilt. Inside Robotman, there is the triple barbell and a small rectangle of plastic that keeps the entire barbell straight and eliminates its ability to tilt. 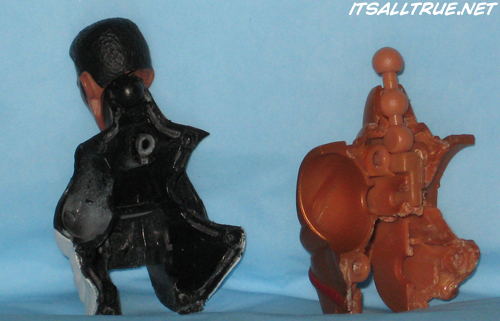 Now, while sanding down the bottom of the head has worked for some customizers, the real problem is inside the chest. There’s no easy fix for this. You can’t simply remove the lower pendulum portion of the barbell (or the piece that holds it in place) because the middle ball isn’t snug with its cavity – the head will flop around and be unable to hold any pose. But I did want to try one thing. I placed Mr. Terrific’s head (double barbell and all) on the Robotman torso… 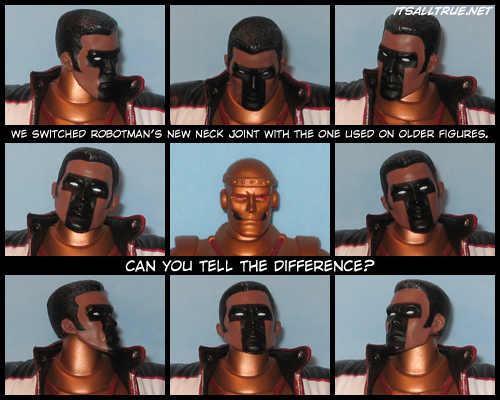 As expected, he has the same range as he does on his regular figure – up/down/tilt. There’s no obvious reason for why Mattel has switched to the triple barbell – had the older version been used on these newer figures, we’d still have that same articulation we’ve come to expect. While we can’t say with certainty that all of the non-repaint figures from wave 9 & 10 have this triple barbell (save Guardian), it’s likely. We can confirm this ball-joint is in use on Romat Ru, Robotman, & Icicle – all figures that have lost range of motion on the heads. I’m confident enough to say that we have our culprit.

But, we’re left with more questions. Namely, why? What was wrong with the original joint that caused this triple barbell to be developed? At what stage of production was this changed? Are they really deciding to switch between the double and triple barbells on a “figure-by-figure” basis? And if so, why was Guardian spared? We may not know more than we did before, but this information can only help us to be more clear when we ask Mattel about this change and allow us to be precise in what we’re requesting – going back to the double barbell or redesigning the triple barbell to do whatever it is that it’s supposed to do without the trade-off of blocked articulation.