Our Blackest Night Double Feature continues with a review the newest DC Classics 2-pack from Mattel, the Color of Fear.

We’ve talked about lead time before and how for most licensees, they have difficulty getting product to market that is well-timed with the events happening in the comics. The Color of Fear 2pk is meant to tie-in with last year’s Sinestro Corps War (that really needed a better name), but that event tied directly into Blackest Night (Blackest Year!) anyway, so all things being the same, this is an opportune time for Mattel to be releasing this 2pk. With both Mattel and DC Direct producing Blackest Night figures it’s good to be a Green Lantern fan. If you’re unfamiliar with Blackest Night, you can learn more at the Blackest Night mini-site at DCComics.com.

One of the best parts of Sinestro Corps War and Blackest Night has been the cast of characters introduced as new Lanterns. From Larfleeze to Dex-Starr, the cast of the GL franchise seems to be growing by the Wednesday. And these characters, some with rich backstories, are catching on with fans. My biggest complaint about Blackest Night is that they aren’t spending enough time on of these new characters. The storyline has so many threads, that a lot of characters have been little more than eye candy in the background. I hope that, going forward, DC finds a way to publish more stories about these other Lanterns (if they all survive Blackest Night) and that includes characters like Romat-Ru and Karu-Sil, the two characters featured in today’s review. 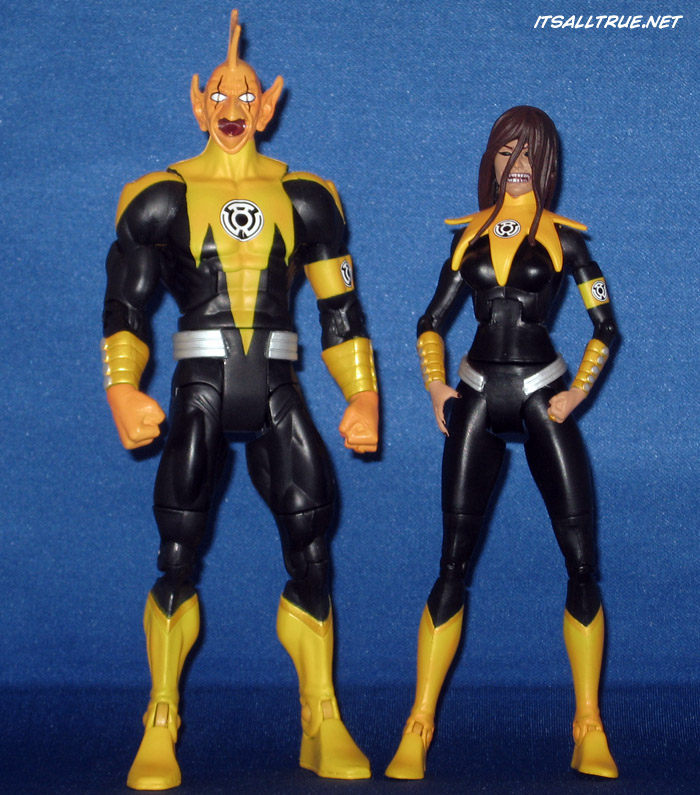 Even though I read Sinestro Corps War, I was only familiar with Karu-Sil when I first heard about the 2pk. Karu-Sil is a little bit older (her first appearance features her in a blue/purple Sinestro Corps uniform) than Romat-Ru and she’s been featured a little more prominently while dealing with Guy Gardner and the Zamarons. Romat-Ru is no slouch though. He blends into the mythos of GL by being a member of the same race as the classic Green Lantern Tomar-Re, and is that planet’s most notorious serial killer. In the current titles, he is often shown as being a lieutenant in the Sinestro Corps and being sent on missions at Sinestro’s behest.

Karu-Sil uses the first female buck with a few additions. The main drawback to this buck is the tiny arms, but if you keep the biceps turned inward, it helps the figure look a lot less fragile. Sil features new forearms with the trademark bands, new hands (w/ sculpted ring), a belt, and a new collar, all topped off with a great headsculpt. One of the reasons Karu-Sil might stand out among the other Sinestro Corps members is that she’s usually drawn from a distance at first – and you can mistake her for a beautiful woman at a distance. It’s not until you get up close to see her crazy eye and bare teeth, and by then – it’s too late for you. The 4H have perfectly captured Van Sciver’s depiction and sold the figure just on the headsculpt. 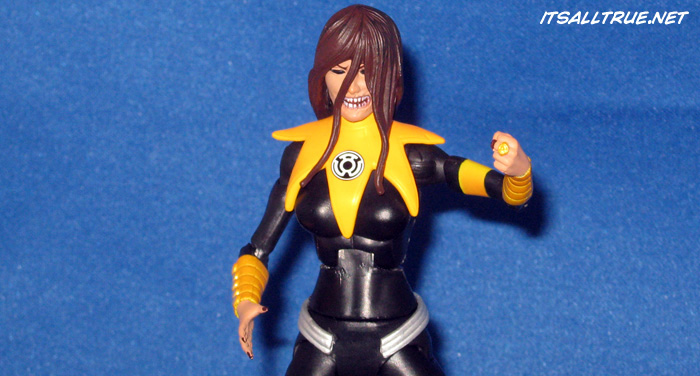 Sil doesn’t require a lot of paintwork, but what is there is good. The tampos are perfect. The fingernails are a nice touch. The boots are painted-on details, but it works. Her exposed eye (under her hair) is great and really catches your attention the first time you see it under there. Articulation is what you’ve come to expect on DC Classics. Her head should have good movement, but the hair blocks it. On the two we inspected for the review, both had a warped left leg due to the packaging.

Karu-Sil comes packed with one of her ‘Fathers Three’. You can read her full bio here, but essentially she was raised by a trio of the animals after her family was slaughtered. A passerby Green Lantern saw her with them, thought she needed help, and killed her adopted family in an attempt to “rescue” her. Oops. When she gets her Sinestro ring, she recreates the trio and treats them as she would the real beasts. This does lead me to the one complaint – I want two more! The ring constuct features an articulated neck. 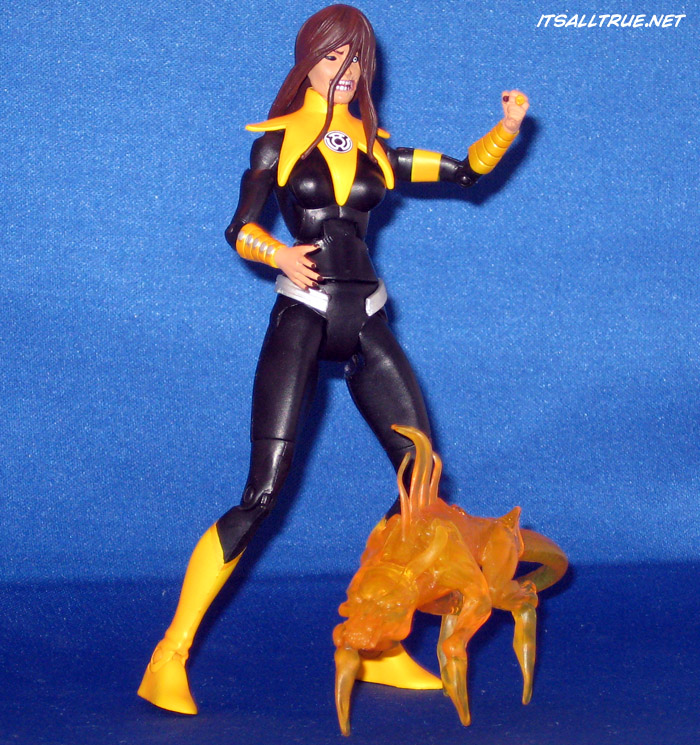 Romat-Ru uses the main buck from the DC Classics line. He has Adam Strange’s lower legs for the sculpted boot lines and features new forearms, new hands, a belt, and a Xudarian head sculpt. I’m against screaming head sculpts, but I don’t know if I’ve ever seen a Xudarian with their mouth closed. I still assume they can, and I still hope that this doesn’t mean the eventual Tomar-Re will be a screamer (via reuse) too. I do have to admit that it looks good here. 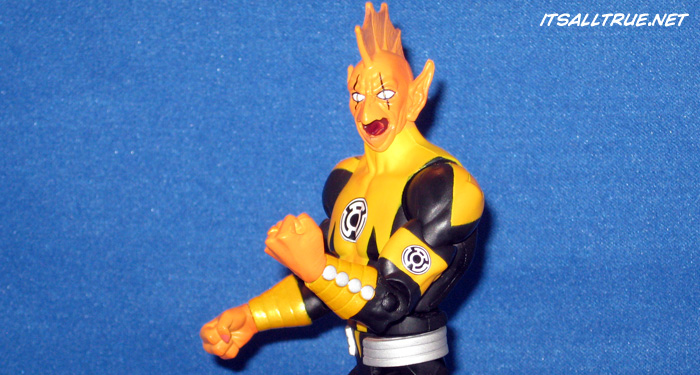 Paintwork is good all around with crisp lines and sharp tampos. The figure is articulated like every other DC Classic, but he does have the triple barbell that prevents the neck peg from moving and decreases the range the head can move. He can look side-to-side and down. That’s it.

Overall, these are two more solid figures to add to your DC shelf. The two figures blend well with the shorter Sinestro from earlier in the line (despite his being more of an orange-yellow) or the metallic yellow of Kryb and Sinestro from DC Direct. As a whole, they’re making for a great front of the shelf group – especially while the story line is running in the comics. 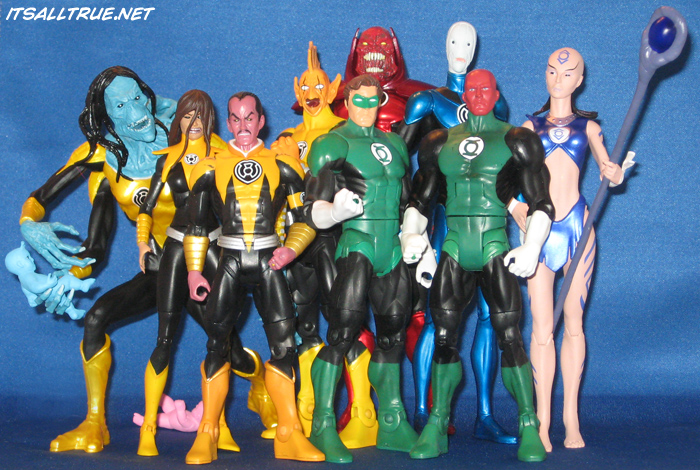 This 2pk is still available, but it was said to be selling “better than expected” by Toy Guru. Unfortunately, it is the next to last Matty 2pk. While there seems to be a future for other DCUC multi-packs on Mattycollector, the low sales of the earlier 2pks (Battle for Earth-3 & Space Heroes) seems to have put the kibosh of Matty’s plans for now. The last 2pk, Justice in the Jungle featuring B’Wana Beast & Animal Man, is scheduled for December. 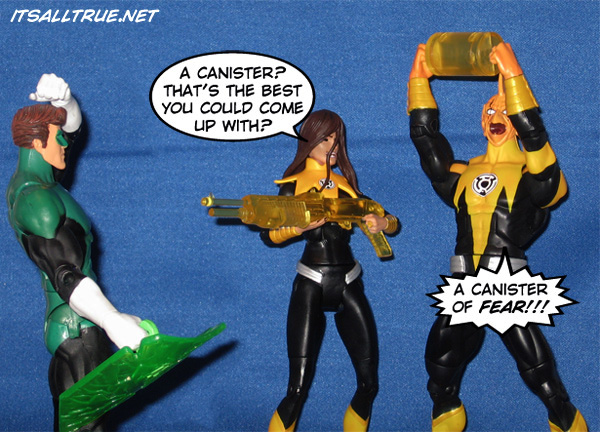