I’m ambivalent on the Mattel/Wal-Mart partnership. I really don’t care if they keep getting exclusives or not. I live practically on top of Wal-Mart HQ and have dozens of stores within a reasonable driving distance, but that doesn’t make it easy to find the exclusives. I didn’t get DCUC5 first hand. I had to buy the Giant Man figures and Nemesis figures while traveling in other states. And I know that even though DCUC10 was easier to find for a lot of fans, the bad taste DCUC5 left in the mouths of most collectors is still fresh enough that even I cringed at the announcement that DCUC14 would also be exclusive to the retailer. But I’m not writing about whether there should or shouldn’t be Wal-Mart waves today. That ship has sailed, so I’m moving on too. But I do have a problem with some of the figures that go into Wal-Mart waves.

Wal-Mart exclusive DCUC waves don’t have variants, at least none of them have so far. That’s a good thing. Two less figures to have to track down at an exclusive retailer is a nice relief from what can be an untenable situation. And I’m not suggesting that they should start putting variants in those waves either. But I would like to see Mattel chose the figures in a variant wave more carefully. If a figure can or should have a crucial variant, then it shouldn’t be in a wave that doesn’t support variants. 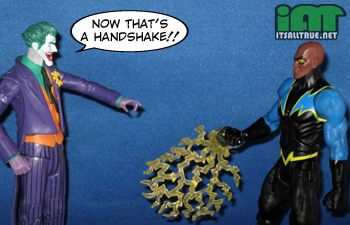 I know that Mattel has a system in place for choosing wave lineups. And to be honest, I’ve been really happy with it. I know each collector has waves they like and waves they don’t. I wasn’t that excited for waves three or twelve in particular, but I still consider character selection to be a real strength of the DC Classics line. Even if I don’t love every wave, Mattel really can’t make a character I don’t want.* The only problem I ever have with the character selection is when they miss a juicy variant. Sometimes, it’s cost. I get that. Sometimes, it’s that I’m crazy and want obscure things. I get that too. But other times, Mattel has placed a character with multiple popular costumes in an exclusive wave. That hurts.

* – Cosmo, the Phantom of Disguise is on my want list.

This weekend’s news about the confirmation of DCUC14 was like a roller coaster. First, came word that the Zatanna figure would be a reality. Then, the excitement was amped up with the images from ToyFare! We were finally getting Zatanna and the figure looked fantastic. All we needed was to see the Perez variant! Then, everything came crashing down the following morning. She was slated to be a Wal-Mart exclusive. That meant no Perez variant.

If you’re not familiar with Zatanna, she’s had a few different costumes. Her basic appearance is what we’re getting for the figure, that of a female stage magician. I’m happy about that. If we do only get one, that’s the one I would rather have. But, Zatanna has also had other costumes – most notably the one given to her by George Perez in the late seventies during his JLoA run. While it wasn’t around as long as her basic costume (and its subtle variations), it’s been imprinted on many fans. And some would’ve preferred that version be the only one Mattel makes. That’s a fan split that a 50/50 variant would have easily solved, but now that Z’s in the Wal-Mart wave, we’re not sure when, or if, that’s in the cards anymore.

Zatanna isn’t the first figure that this has happened to either.

In the first Wal-Mart exclusive wave, if you found it, you found the Atom, Amazo, Black Lighting, the Eradicator, and the Riddler. If we wanted to get really deep into this, all five of those figures have appeared in different costumes. But the alternate costumes of Amazo and the Eradicator are probably not in that high a demand, so we’ll drop those two off the list. 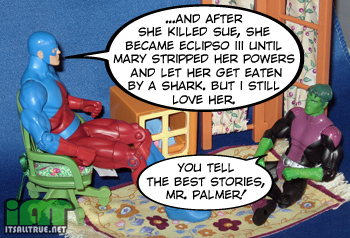 The Atom. The Atom has two quick ones that jump to mind. First, his successor, Ryan Choi. A new belt and a new head would’ve been all it took to make this figure a reality. With Dr. Mid-Nite though, Mattel stated that modern versions of classic characters could see release on their own; that they don’t need to be relegated to variant status. Maybe that applies to Ryan Choi. I hope so. But what of the Sword of the Atom? Reuse some Deathstroke pieces, slap on some soft plastic parts, and a new head. Boom. A perfect variant.

Black Lightning. This one bothers me because I feel Mattel gave us the worst of his four costumes. There’s his original costume, his 90s costume (my personal favorite), a later 90s costume (used in the Public Enemies line), and then the costume from his recent appearances in JLA/Outsiders. The DCUC5 figure is based on his current look though I imagine the original is the one most fans wanted. The question now is, can Black Lightning get three figures? That’s what it’s going to take to get the one most people want.

The Riddler. This one’s a no-brainer. A classic jumpsuit Riddler. Put a new head on the standard buck and give fans of the classic Legion of Doom Riddler they want. I have nothing against the suit version, I like it too. But this is probably the best example of a figure that shouldn’t have been in a Wal-Mart wave.

The 2009 Wal-Mart wave was a little better about not having obvious variants. A trench coat Joker could surely carry his own weight and wouldn’t need a variant. There probably aren’t too many fans clamoring for one of Power Girl’s other costumes or for the dark version of Forager’s costume.* The only clear standout from DCUC10 is Beast Boy, but he’s a big one. Beast Boy has had his fair share of costumes. Not only did Mattel give us one that he only wore for a brief time in the comics, but by placing him in a variantless Wal-Mart wave, fans missed out on a chance to get a classic version for the Doom Patrol or a Perez version for the classic Titans. Instead, there’s a Beast Boy figure that doesn’t really fit much of anywhere. 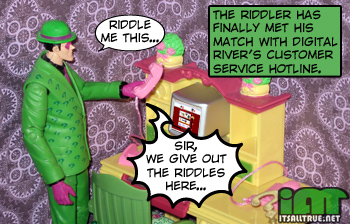 And now in 2010, the choice of figures in the Wal-Mart designation of DCUC14 is robbing us of more variants. We already mentioned the disappointing lack of the Perez Zatanna, but there are others. A Sentinel version of Alan Scott probably isn’t in high demand, nor was a shadowform version of Obsidian. We weren’t going to get GA/MA variants based on Matty’s Dr. Mid-Nite comments either, but any of those could have happened in a normal wave. And there is one other one that I think would have been cool. Tommy Tomorrow.

I know you all just went… who? Tommy Tomorrow of the Planeteers was a long running backup seen in the pages of Action Comics and World’s Finest Comics for about fifteen years. I’d love to have this classic character and DCUC14 might have been his single best chance for release. Why? Because Tommy is Kamandi. If the Great Disaster were adverted, Kamandi wouldn’t have been the last boy on Earth, he would’ve grown up to be Tommy Tomorrow. Not only would that have been a great nod to longtime DC fans, but it would’ve been yet another signal that Mattel is serious about getting to every corner of the DC Universe.

But that’s not going to happen now. We’ve got another Wal-Mart wave and that means, just like before, some key variants are ending up on the cutting room floor. Like I said at the beginning, I’m not advocating that the Wal-Mart waves should have variants. I’m happy that there are two less figures to buy when it comes to finding these at Wal-Mart. I’m also not calling for an end to the retailer exclusives. They serve their purpose. But some characters shouldn’t be in exclusive waves going without variants while other characters, in regular waves, get variants that we don’t need. 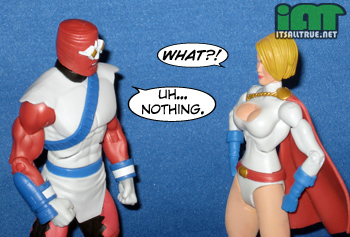 There’s a lot of lame variants when it comes to the 70/30s. Helmetless Barda? Glow-in-the dark Spectre? Purple Wildcat? Phasing Deadman? Unwrapped Negative Man? Now, you may like some of those. I could’ve taken either Wildcat, but there was no need for both. I do like Phasing Deadman, but he makes the regular one redundant. I still haven’t opened it. You may disagree on some of those, but Helmetless Barda?* We get that as a variant instead of Perez Zatanna? Really? We’re getting a Negative Man with an unwrapped head and we don’t have a first appearance Black Lightning? That seems wrong to me.

* – Had she been in her bikini, that would’ve been a terrific variant. I’ve always wondered if that was the plan at one point.

Bottom line, Mattel needs to be just a little more careful when deciding where characters that have smart variants available end up. Obsidian was a fine choice for a variantless wave. So was Tyr. But Zatanna? Come on. Zatanna is the poster character for a figure that ought to have a variant. So was Beast Boy before her. And the Riddler before him. Each Wal-Mart wave has had at least one character that didn’t get a variant and left fans wondering if they’ll ever get the version they want. Will there be a Changeling? A Classic Riddler? A Perez Zatanna? We can only hope that Mattel will find away to approach these characters again (and not in multipacks or twopacks where we have to double up on a figure we already have). Going forward, we also have to pressure Mattel to stop putting characters that should have variants in waves that can’t have them.

And yes, I really would’ve been excited for a Tommy Tomorrow. I can’t be the only one…

50 thoughts on “Truetorial: DC Classics & Walmart –
A Match Made Without Variants”