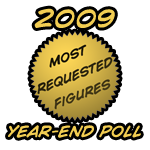 Before we get to the finalists, we want to thank the hundreds of people that voted in our poll. It was the largest poll turnout we’ve had yet!

Here are the the finalists in alphabetical order…

There were some suprises in there for us. Extendar, the only official MOTU character in our poll, is pulling the weight of MOTU fans behind him. Mera’s meteoric rise continues as she’s a finalist for Most Requested and Swamp Thing’s exclusion from Mattel’s license is clearly on the minds of many fans. The big winner here is Mattel – no matter who takes the top spot, they’re already a lock for receiving our request.

An honorable metion goes to a DCUC Bruce Wayne who was narrowly edged out of third place. Other honorable mentions include DCUC Arkillo, Disney’s Rocketeer, and JLU’s Toyman. After that group, there was a noticeable gap in votes. DC Classics and MOTU Classics were the main focus of the write-in votes, but we received write-ins from across the toy spectrum. We heard your suggestions and many of them could be seen in upcoming Most Requested Features!

Thank you for your participation and be sure to check back on the 23rd to see the results and vote in Round Two!

17 thoughts on “Most Requested Year-End Poll: The Finals”