In a generic sense, Hasbro has basically made a female counterpart to the Renegades Storm Shadow. The sculpt here is just as good as SS, the anatomy spot-on, and there are some nice extra details like the addition of a blindfold sculpted over the mask. 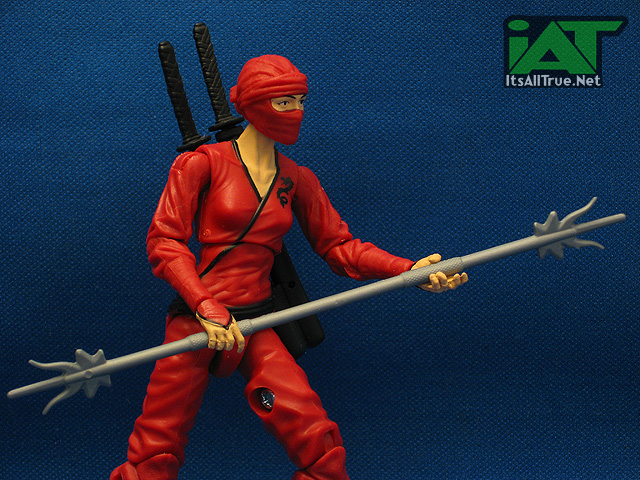 There are some deviations from her classic look. I originally thought that was because Jinx does share her figure with the modern Jinx from Retaliation. The figure was also available in a limited variant white deco with an unmasked, movie head sculpt and a black/yellow version will be available… sometime between now and next year. Some of the details like the covered feet, the wraps on the forearms, and the shin guards likely come from film details, but neither of them really explain why the neckline was changed.

But you know what? I don’t really mind one bit. The open neck looks fine as do the covered feet and different cuffs. I did have to laugh because the folks at Hasbro managed to find an old comic image of Jinx where her neck was obscured so there’d be no discrepancy though. Also, on a related packaging note. Jinx’s real name is still listed as classified on the file card, but the file card has to call her Kim Arashikage. Might be time to update those file cards, Hasbro… 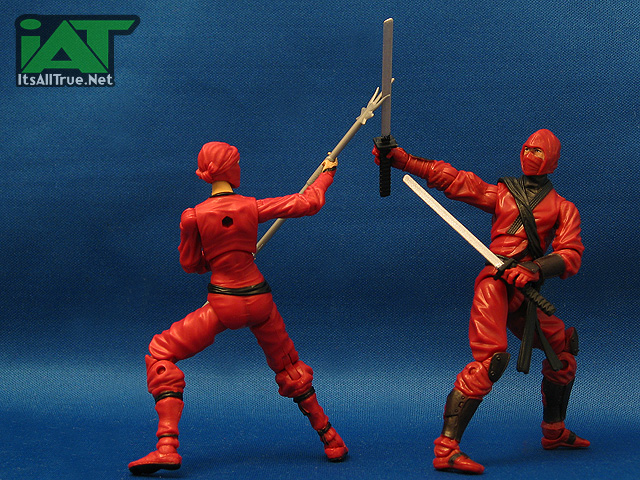 Articulation is really good on this figure. I would say great, but the lack of thigh swivels did annoy me here or there while I was taking pictures. Jinx is pretty close to being on par with last year’s Storm Shadow. The wrists are simple swivels instead of ball-joints, but that’s understandable due to the small size. One big upgrade though is the ankles – Jinx features that new peg-in-the-foot I keep raving about. It really helps pose her because I can adjust those just about any way I need. There is one drawback here though – the peg holes are still in the heel of her feet and are too shallow for the standard stand. Oops.

Paint was similarly good. The black detailing was sharp throughout, the dragon tampo looks great, and the eyes are painted well – all that’s really not right here is the that exposed face isn’t quite painted as fully as it should be. It’s almost good enough to overlook. I know some of the pics make it look really noticeable, but luckily the head is only like a half-inch tall in real life and it looks sharp for the most part. 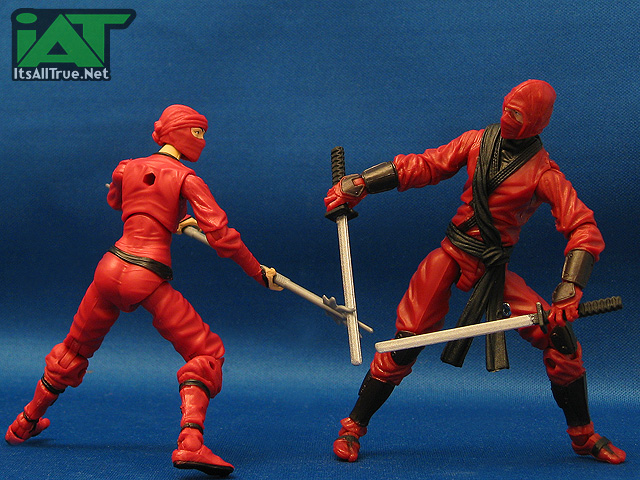 For accessories, Jinx includes her classic staff (it’s kinda her thing) and a pair of swords with a backpack to stow them in. I was a little disappointed by the pack because it’s not the one shown in the press images, nor is it similar to the classic one. It’s a minor nitpick, but I think she looks better with one sword over each shoulder and the backpack they substituted in leaves both swords going the same way. It still looks fine, but the press image looks better.

Overall, I’m very happy with this figure. Jinx was a big “why didn’t they make…” figure for me when the line first switched to Rise of Cobra product. I’ve still got a laundry list of Joes I want redone and I’d like to see Hasbro get back to figures like this at retail sooner rather than later, but for now I’ve at least got Club Exclusives and SDCC Exclusives to keep rounding out my collection. And there is that Joe subscription too. (man, I wish I knew what to do about that… I want to sign up, but the prices are killing me)

Anyway, long story short, Jinx is another great entry in the 25th/30th/whatever Joe collection we’ve got going. It’s awesome to be able to add her in, but perhaps even better is that Hasbro now has a great generic female ninja buck. Let’s hope it seems some use beyond Jinx.
[nggallery id=107]

For more G.I. Joe Reviews, check out our Review Index.