I can’t believe Earthworm Jim is eighteen years old. That’s not groovy. I haven’t played the game in forever, but I burned many hours playing the first two games back in junior high. Jim has since fallen on some hard times, but Mezco has him back in the spotlight this summer.

Earthworm Jim is the classic toy story, but with a video game twist. In the mid-90s, Playmates Toys was flush with cash from TMNT & Star Trek and wanted to expand with a new franchise. But unlike those fab 80s when franchises were given the cartoons we know and love, Playmates thought it best to kick off with a video game. They approached some top industry talent (namely Doug TenNapel & Dave Perry) and essentially struck gold, at least for a little bit. The first Earthworm Jim game was routinely listed on Top Lists for Genesis & SNES, the 2nd Earthworm Jim game is considered by many to be superior to the first, Jim ended up with his own cartoon series after all, and Playmates did finally get around to making action figures – though the toy line was tragically cut short. 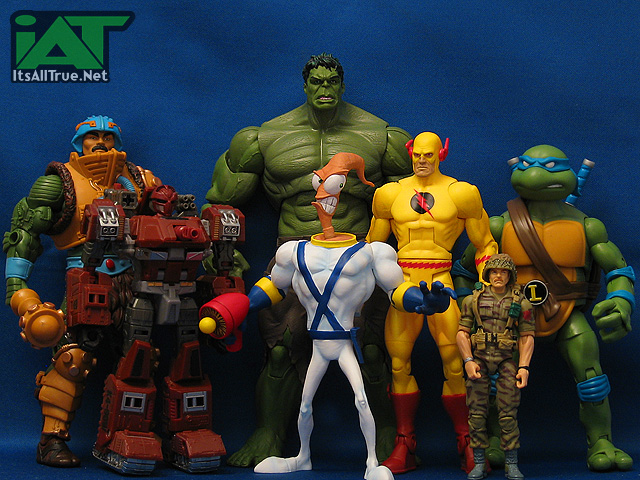 For me, the appeal of Earthworm Jim was a mix of it’s ridiculousness and satire. Jim was your run-of-the-mill earthworm when this futuristic cybernetic suit fell out of the sky, landed on him, and makes him into the hero we know and love. He immediately runs afoul of the psychotic crow bounty hunter, Psy-Crow, who had been paid to steal the suit for Queen Slug-for-a-Butt. The evil queen becomes Jim’s primary nemesis and ideally his future sister-in-law should he win the heart of Princess What’s-Her-Name. If you’re not already sold from that, I can get into Bob the Killer Goldfish, Evil the Cat, and Professor Monkey-For-A-Head. Sometimes, I think those games were made for me…

Anyway, so toy collector, right? Earthworm Jim also represents one of my first real forays into complete and utter toy collecting disappointment. It was the 90s, so the action figure line consisted heavily of Jim variants, but Playmates did manage two supporting cast members and three villains in the first wave. I never enjoyed Playmates habit of not painting accessories, but the toy line was otherwise awesome. At first. 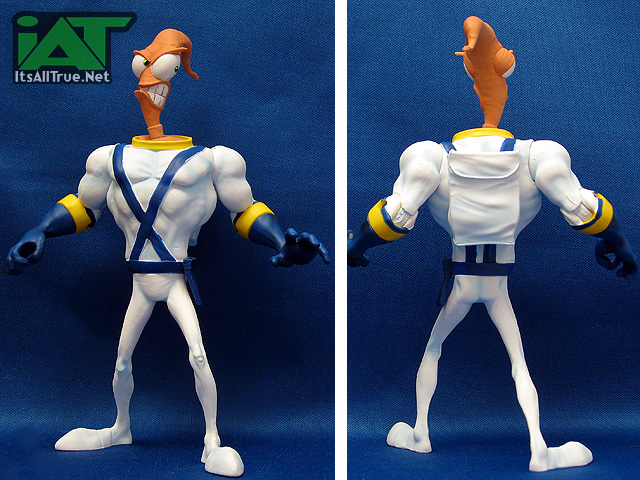 The company that made the Earthworm Jim games would change hands, the original rockin’ developers would move on, and the third Earthworm Jim game, for N64, just wasn’t as cool (and was virtually impossible at times, more so than even the first game). The Game Boy port sucked. The cartoon ran its course. And the toy line never got a second wave. And worse still, we know what the second wave was. Namely, we never got the Queen or the Professor, but there were some fun Jim variants and the Hamsternator on the chopping block as well. Ouch.

And that’s really been it for the last twelve years. Jim burned brightly, but went out fast. There’s usually some rumor of Earthworm Jim 4 going around and I think Xbox released an update of the original game not too long ago, but it’s been quiet otherwise. Until Mezco announced they were bringing Earthworm Jim back to plastic. 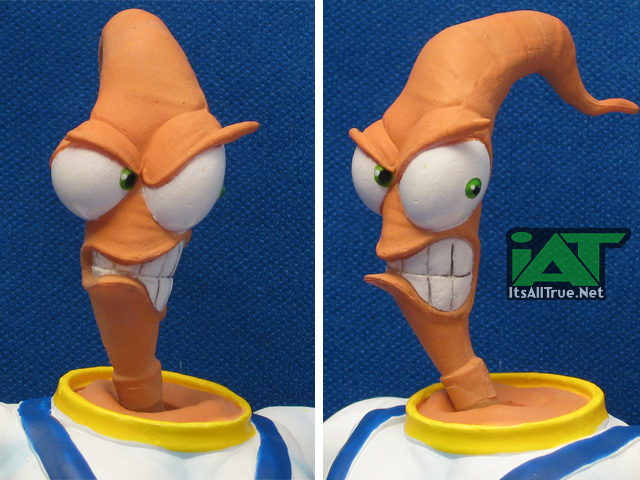 I get busy, so I was a little confused when I heard Mezco was making a new Jim figure. I didn’t realize there are actually two versions. The one in this review is the regular release; I got mine from BBTS a few weeks ago, and this version features the standard deco and Jim’s angry face. It basically recaptures the look of the box art from the original game.

There is also a metallic deco that was released as an SDCC exclusive. It’s still listed as available in the Mezco store and I have to admit I’m mighty tempted. I don’t need two Jim’s, but that one features a smiling Jim head. Ugh! 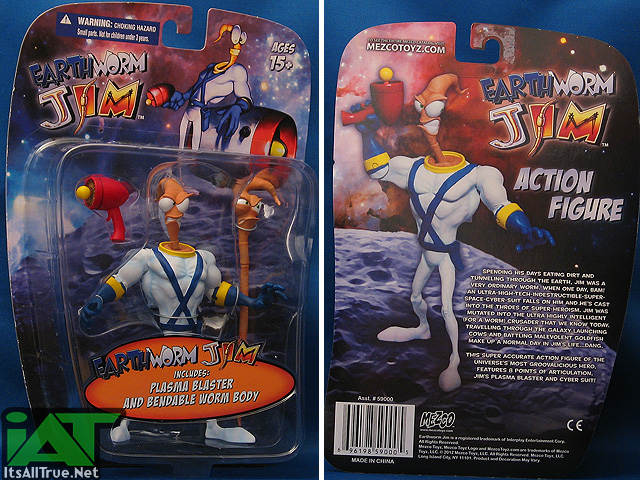 Let’s focus on the worm in the hand. First off, I wanted to give a rare shout out to the packaging. It still ended up the recycle bin, but I liked that even it had a 90s feel to it. I loved seeing the box art from the PC game reused (though it makes me long for a game-accurate Pocket Rocket) and the copy on the back has the right tone for the figure. It was fun to rip open.

The figure inside looks fantastic. The sculpt captures all the right details from the game version and the figure makes me happy just having him stand there – which is kinda all he does! As fantastic as the sculpt is, the articulation is limited to above the torso – a one-piece ball-joint at the neck, two-piece ball-joints at the shoulders, hinged elbows, and swivels at the waist and forearms.

Honestly, it doesn’t bother me that he’s lacking articulation below the waist. One, we’re not going to get a Pocket Rocket for him (though, hey Mezco, just make him some new seated legs and we’re good to go…) and two I think the articulation wouldn’t work well given the design. Dem legs are spindly, no? For once, I think I can get behind the decision to cut the articulation. 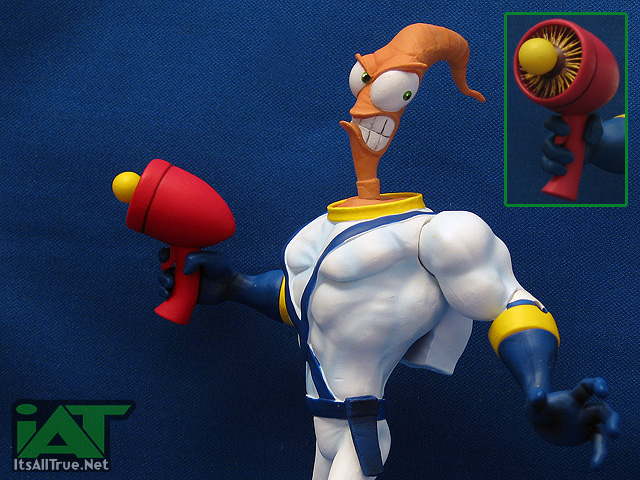 The only thing I don’t like about the figure is the eye placement. It’s right on for the cover art, but it just doesn’t quite work in three dimensions. In 2D the weird eye placement always looked fine, but with the figure, if you’re looking at Jim any other way than to his left, you can’t really see his eyes and it makes the figure look off. That kinda adds to my wanting the SDCC/metallic version A his eyes are a little better placed. But really, I just wish Mezco could’ve packed both heads with both figures and maDe them swappable parts. I won’t knock this figure for not measuring up to that ideal -the figure is awesome – but that would’ve taken things to the next level easily.

The paint work is fairly solid. The head looks fantastic, which is always key. Most of the other lines are sharp, but the blue straps are a little warbly. I don’t think it detracts from the figure though. It seems more right with them being slightly uneven, even if it is a state-of-the-art cybernetic suit. 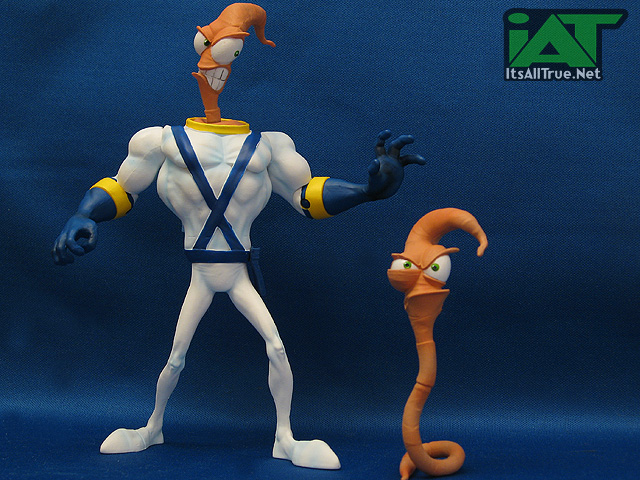 Jim did include two accessories. One, his trusty Plasma Blaster which looks game-accurate and really brings back the memories. The only issue is that this version of Jim can’t look at where he’s pointing the gun. He’s got that “gun drawn and coming around a corner pose” down, but even with the great articulation in the arms, he feels limited. The other accessory is a pretty fun one – Jim sans the super-suit. Basically, it’s a bendy worm (with a third Jim expression!). It feels sturdy like good bendy material should and it can stand up on its own, so it’s another full of win accessory – though again I find myself wishing there was a way to attach it to the figure as an alternate head. I know, I know, I’m harping…

I know most of my issues are about wanting more out of this figure while stressing that Mezco did a great job. I can’t help it though, I’d love swappable heads and more accessroies – I mean, really, no Snot? But that’s all just because I love Jim and because Mezco has whetted my appetite with this great figure. 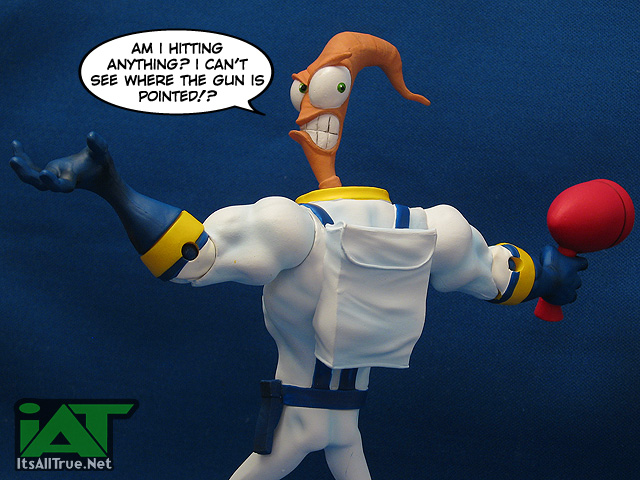 He looks fantastic; like he walked right out of the game. It’s an amazing figure that leaves me futilely hoping that Mezco will get deeper into the franchise and make Psy-Crow, Peter, or the Princess. Or at the very least, give me a figure that I’m still crushed to this day Playmates never made, one that wasn’t even in the canceled wave, one that would be delightfully easy for Mezco to do (I’m desperate, I’ll overlook the triangular collar), the twisted and evil copy of Jim, Evil Jim. Evil Jim is essentially Jim’s Bizarro, created in a bizarre accident involving a photocopier and toxic waste (how can anyone not love Earthworm Jim…). I don’t know how deep Mezco intends to go, but I’d like to see ’em try!

For more reviews, check out our Review Index!