Some folks tend to avoid the internet on the weekends. If you’re one of them and you collect DC Classics, you might have missed a few important news items. On Thursday, we relayed Matty’s message about DCUC9 shortages and then watched as the prices on eBay climbed accordingly. We’re in between on how difficult this wave will be to find. Vault stumbled onto a case at his TRU on Wednesday and found the first half of his Chemo set. That filled the rest of with hope that this wave won’t be a repeat of DCUC5 which none of us ever saw at retail, but we won’t know for sure until the sightings dry up.

Matty also updated the schedule for MattyCollector.Com. A few things moved, but for DC Classics the main change is the delay of the Color of Fear 2pk. We were looking forward to that 2pk for October, but it’s been moved back a month. This also means Nov & Dec will be back-to-back 2pk months. We’re disappointed by the delay, but it may be a good thing…

Overshadowing the bad news about DCUC9, was the first retail sighting (& subsequent eBay sightings) of DCUC10. Yep, you read that right. DCUC10. Many DC Collectors are still on the hunt to finish up DCUC8 (released in July) and DCUC9 (released in August), but in the next couple weeks, we need to be adding DCUC10 to our need list. What’s more, the Superman/Batman: Public Enemies DVD drops in a week and we can’t imagine those figures will be too far behind. If you remember, preview samples of the PE wave were sent out at the same time as wave ten. That would seem to imply they’d be scheduled to hit about the same time. And, if that’s not enough for you, AFI will have preview samples of DCUC11this week. Remember when we saw DCUC12 photos and that wave seemed forever away? That was just last week.

It’s a crazy time to be a DCUC fan and many of us probably have empty wallets, angry wives, and more shelving in our future. That is, if we’re lucky.

While we’re on the subject of DC Classics, Noisy has one mini-review leftover from SDCC and it’s on a certain blue monkey, so we’re going to tack it on here.

This will be a small review for a small figure, but I wanted to talk about how lucky I am to own a Gleek at all.

I had two friends going to SDCC who were trying to hook me up with the Mattel swag, but neither of them were able to get Gleek or the Wonder Twins. I turned to eBay and found a reputable seller with a great rating and a reasonable BIN of the 2pk w/ Gleek. I grabbed it before the con was over, but when it arrived, there was no Gleek (and Paypal dismissed my claim, meaning no refund either). By the time that was all decided, the eBay prices had gotten really high and I was convinced I’d have to go without on this particular exclusive.

Even though I never win anything, I followed ActionFigurePics on Facebook to enter AFP’s Gleek contest. The random number generator picked me out of the seven hundred some odd people that signed up. I was floored. I’ve thanked some of the guys involved personally, but I want to give a public shoutout to Ron of AFP, the guys at Fwoosh, and ToyGuru for making that giveaway possible. I wouldn’t have this figure without them. Thanks again.

Now, on to the mini-review…

I really like this figure. The Four Horsemen nailed Gleek’s cartoon look, but gave him enough detail to be realistic – for a blue monkey, anyway. The paintwork is done well too. The symbol is crisp and even the tiny light purple areas are painted clean. It’s very well done for what would normally be just a pack-in figure. And Gleek is compatible with rest of the set. The eagle can clip on his arm, his left hand is sculpted to hold the bucket, and an open-handed DCUC figure can grab him by the tail. The fact that he can do more than just sit on the shelf really helps his play value. Mostly, I’ve been passing him around to the few open-handed DC Classics figures.

My only issue with Gleek is his articulation. He’s sports a cut neck and cut shoulders, but the articulation is embedded so it looks like it should have more movement than it does. The legs are separate pieces, but they don’t really turn on mine and, well, I’m not going to force anything on his figure. I don’t think Gleek needed to be super-articulated, but I would have liked to see ball shoulders and his tail be able to spin. Other than that, though, Gleek is well done.

Overall, if you’re lucky enough to snag one, you should be happy with it. The figure is a great rendition of Gleek. I can’t say it’s anywhere near worth the current secondary prices, but if you want one, you want one. 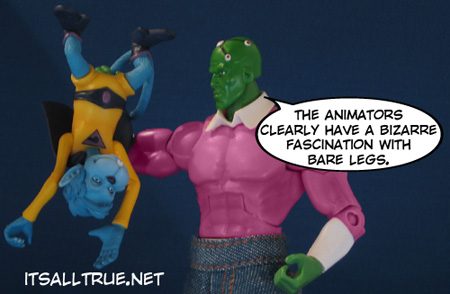 28 thoughts on “DC Classics Updates
and a Gleek Mini-Review”