DCClassics.Com Asks: In a previous Q&A, Mattel stated that Atrocitus would be the size of a standard figure. Is there no possibility of utilizing previously tooled pieces such as taller feet, longer calves, longer pelvic piece, or even the Public Enemies buck instead of just consigning the figure to be inaccurate?

We have explored using elements of the Public Enemies buck. We are continuing to look into this. In any case, know that we will work to deliver a great figure.

DCClassics.Com Asks: An unannounced Reign of the Superman pre-order wave is showing up at some online retailers. Is this a legitimate wave?

There will be no “Reign of the Superman” wave. This information is not correct and was not announced by Mattel.

ItsAllTrue.Net Asks:When the Club Ecto-1 subscription was cancelled in September, a “thank you” was mentioned for subscribers. Is there any news on that front?

We’ll be announcing that news shortly. 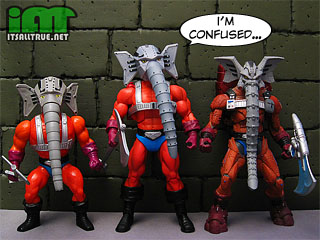 MOTUClassics.Com: Taking it account the vintage-inspired Snout Spout’s one-day sellout, has Mattel given any thought to a “Battleground” type release that incorporates more modern, but classicized elements like the tusk anatomy for the head, the hooves, or even a handful of armored/techno body parts that would be more complimentary to his current head sculpt?

No. While we will include some Classic-sized version of 200X armor and weapons we won’t be doing 200X versions of figure’s heads or bodies. All the looks for MOTUC will be based on the Classic look which is a modern update on the vintage design.

MOTUClassics.Com Asks: Speaking of cybernetics, is a new basic buck that features a slightly more armored/techno look possible? It would’ve greatly improved figures like Snout Spout and the upcoming Snake MAA, but would adding armored/technical bits to the basic buck skew to close to hyper-anime detail?

If a figure calls for more parts with tech on them we certainly could do it. We tend to leave these type of choices up to the Four Horsemen.

After you’ve read all those questions & answers, why don’t you take a moment,
relax, kick back, and play with our Spy Monkey Creations Virtual Weapon Builder!