When the ItsAllTrue crew decided to hit up JoeCon, we weren’t thinking about exclusives. We knew about the Crimson Strike Team and we liked it, but they were out of our price range. We’d seen the promotion images for the other exclusives, but as we packed up and made the trek to Kansas City, we didn’t really have time to appreciate them.

Then we got to convention hall, saw the convention exclusive case, and were hit by a very powerful wave of “I need that!”. Collectors know it all too well. Some things, when they’re in front of you, are able to reach out and get you in their grip. All of the exclusives were pretty snazzy in those cases, but none of them stood out to me like the International Jump Jet 2pk. I had to have it. 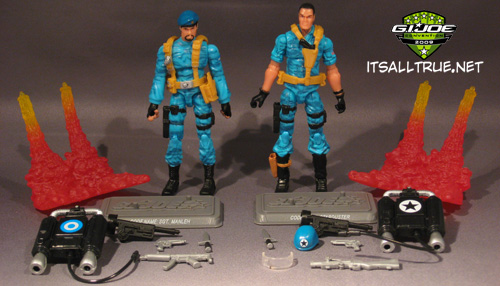 The International Jump Jet 2pk features an update of the Argentinian figure Manleh and Starduster (sans his modern name, Skyduster). Both figures sport a modern version of the blue camo Manleh was originally produced with. The original Manleh was packaged with a parachute and the modern one keeps his skydiving origins intact via the background on his filecard. The story behind these two is that Starduster has been sent by G.I. Joe to train Manleh (and the other Comandos Heroicos) on the use of J.U.M.P. Jetpacks to better combat Cobra. 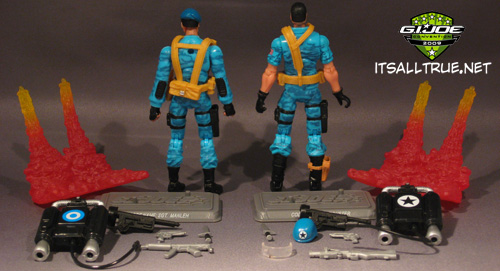 Manleh, as before, is a repaint of Stalker (but version 9 this time) except for the arms and hands. I’m not sure which arms Manleh has been given (I’m sure a sharp reader will point it out soon), but they feature baggy sleeves and pads for the bottom of his forearms. His head is still Stalker’s head, but with a goatee instead of a mustache. On mine, the right cheek is a little warped, but it looks okay.

Starduster is built around the 25th Skyduster that was included in the TRU Exclusive Air Command 3pk. The figure shares all the same parts except for the upper torso and arms which are taken from the “corrected” version of 25th Flint. His 25th Duke bandolier has been switched out for 25th Steeler’s webgear. 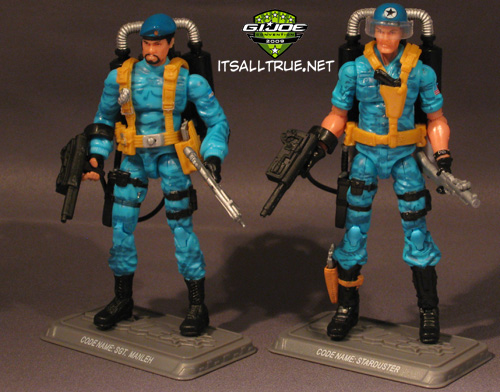 The paint work on these is excellent. The camo pattern is the most noticeable part of the figure and it looks sharp and is unique to each figure. The tampos for shoulder flags are both well done and all the straps, pouches, and belts are spot-on. Manleh’s goatee is convincing even without sculpted details underneath. The only knock on them in the paint section would be Manleh’s beret which is a very nice, but very glossy, blue. 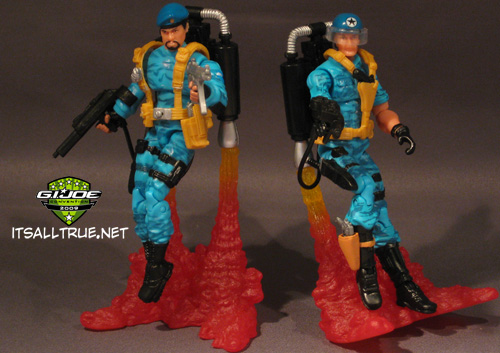 Like most Joes, these guys are loaded with accessories. They both feature individually decoed J.U.M.P. jetpacks with exhaust flightstands. They also both come with a rifle, a pistol, and a knife. Starduster also has his visored helmet. Since these are based on 25th figures – all the weapons can be held or fit into a sheath/holster on the figure. I love when that happens.

The exhaust flightstands are able to stand flush and sit leaned back a little by virtue of their design. They may require a little balancing depending on which figure is using them, but they’re resistant to falling over on their own so far. I did have a little variation with them. Manleh’s jet pack fit snugly into the peg holes on the exhaust, but Starduster’s was a little loose – causing him to usually lean forward when he’s on it. It still stands though, so no complaints here. If it starts to bother me, I just have to add a little putty into the holes on the pack and all wil be well. 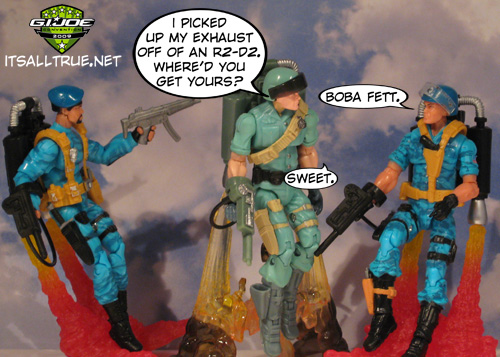 Overall, my wallet’s still hurting a little over the cost of the two-pack, but it was in-line with the cost of the other exclusives. If you can get your hands on it at a decent price, they make a great addition to the collection. They’re as solid as 25th Joes can be and they look great as a pair. It makes me wish that more figures shared this unique camo pattern so I could get a little squad going. If they were regular releases, I’d definitely have bought extras for customs. Can you imagine that blue camo pattern on Shockwave? It’d be cool. The figures also fit into the overall storyline with the other Argentinian figures and the Crimson Strike Team. They’re a great set and even though my 25th figure shelf is a little crammed, these guys are going to get the space they’re due. 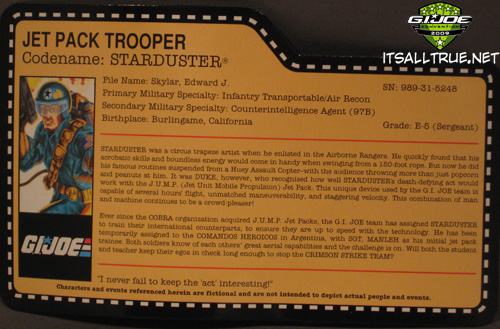 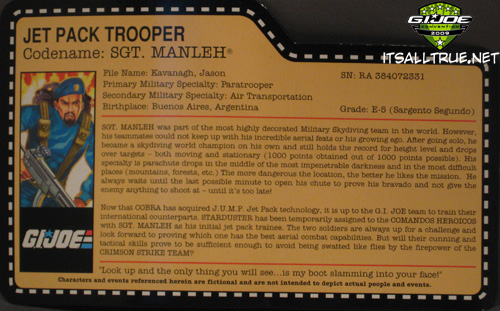