This Destro 2pk is sort of a double bonus for us. On the one hand, it’s eighth in our ten part series featuring the 2009 SDCC exclusives. On the other, it’s parts of JoeCon Weekend Coverage! You’ll find links to both our prior SDCC Exclusive Week Coverage as well as our coverage of the 2009 GI Joe Convention at the end of this review.

When I was deciding where I wanted to set the bar for which ROC figures to get (Oh, ROC Para-Viper, where are you?), it turned out that the unmasked Destro was above it. I just like the look of the suited figure. Plus, it’s Christopher Eccleston. Plus, we’ve got that running Couture gag going. In all, it seemed like I should pick up a set and since they were openly available on HTS, I went for it. For $25, it’s a bit much for a Joe 2pk, but there are a lot of neat extras that make up for the cost, starting with the box… 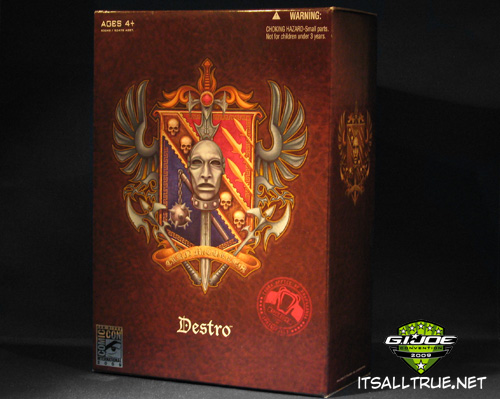 As I mentioned in our Invaders review, a lot of work can go into comicon exclusive boxes. Mattel is trying to make a sound and light show out of it and those are cool in their own right, but Hasbro did something really special with this exclusive. After you remove the outer box, you pull an inner box that is decoed to look like a book. It has four leaves. The front and back covers open to reveal the history of Destro’s ancestors. It literally starts out with James McCullen I in 1413 and gives a brief couple sentences about his history as a weapons supplier. This continues all the way down to James McCullen XIV , the ROC Destro. The back cover has blueprints for background art and it looks pretty sweet. The middle of the book opens to reveal the figures. They’re both in trays that can be slid out of the top of the inner package and then can be pulled free from the tray as single cards. Except for getting them out of the bubble, you can almost open these without tearing the package up. The cardbacks feature a little more biographical information than the box does (And a spoiler!). In all, it’s a great box. So much so, that I felt bad opening it. And I generally open things without mercy. 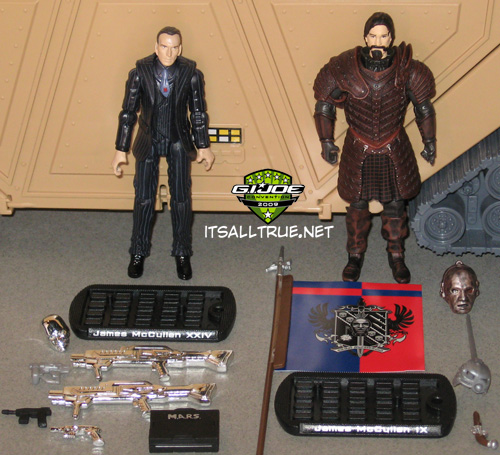 The specific ancestor that Destro comes packaged with is James McCullen IX, a weapons supplier from the mid-17th century. This McCullen features a new head and new armor (upper torso, lower torso, and some shoulder pieces) all applied to the Iron Grenadier Destro body. It’s very deceptively done, only the boots really give it away.

Destro is an entirely new sculpt as far as I can tell. He is a spot-on representation of the film Destro, even bearing the likeness well for this scale. His suit coat and vest are a soft-goods one-piece that can unbutton and be removed. His tie is also a soft goods piece. The ancestor Destro is cool, but this guy is why I bought the set and he doesn’t disappoint. I’ve had a ton of fun with him already. Both figures sport the standard articulation that ROC toys offer. 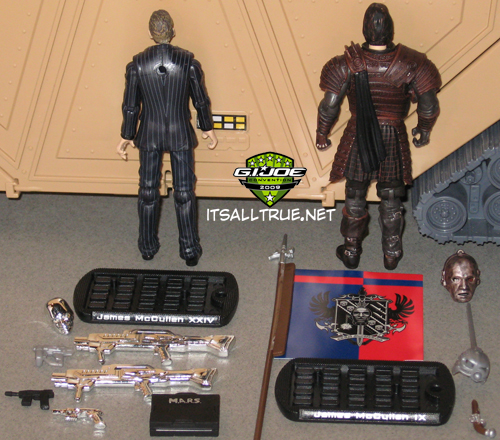 Paint wasn’t an issue on these figures. McCullen IX seems to have a thicker glop paint used on his head and hair, but otherwise the detailing on his armor is superb both in sculpt and paint apps. Destro has great paint apps including his perfectly square red tie clip and his entire pinstripe suit has been pulled off without a hitch. For added effect, his shoes have been done in a high gloss. 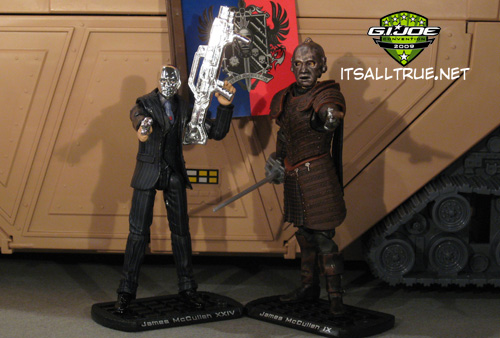 The price point is up there, but the accessories help ease the sting a little. McCullen IX features an iron Destro mask (that looks right out of the 17th century), a sword, a pistol, a standard with the McCullen crest, and his stand.

Destro features a Destro head, three pistols, two rifles, a briefcase (that holds one of the pistols), and his stand. Even more impressive about his stuff is that not only is the Destro head chromed, but so are one of the pistols and both rifles. I am ridiculously excited by the chrome rifles. I don’t know why. I like to pose him holding both up into the air. They just seem oddly appropriate given his fancy suit and tie. 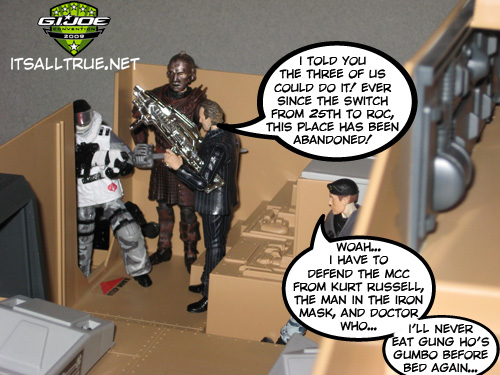 Overall, $25 may be a little high, but it was a convention exclusive with a limited run. And the packaging, detail, and accessories make up for the price a little in my mind. The only knock against the value is that I don’t have plans to display McCullen no. 9. He’s gone back in the box since the review, so it’s really leaving me paying $25 for Destro by himself. But you know, I still think I’d have done it. They’re both good figures, but Destro is a great figure. He’s pushing me to get a little more into the line (I need a General Hawk so Destro can ask what the name of his unit is over and over just like on television!). And being at JoeCon with all the wonderful ROC stuff that’s in the pike doesn’t help. I’ll never have them all, but I think I’m going to have a few more than I intended. The quality on the ROC stuff is just too good to pass up, and this Destro is no exception.