The Wonder Twins. The very name can strike fond memories or loathing in the heart of any DC fan. They’re the product of the 1977 All-New Super Friends Hour, one of the many incarnations of the Super Friends cartoon. When I was a kid, Super Friends had moved on to become The Super Powers Team: Galactic Guardians and had gotten quite a bit better. That said, I have fond memories of the show that featured Firestorm and Cyborg as the teenage sidekicks. The Wonder Twins, despite being on what amounted to a completely different version seven years earlier, still get some love from me. At least enough that I was excited to buy this set when I first learned about it.

So the box set has arrived, albeit Gleek-less, and it’s their turn under the ItsAllTrue spotlight… 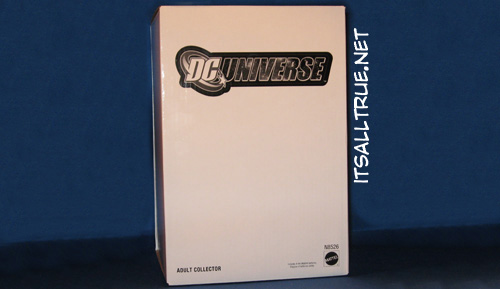 We’ve all seen the amped up lights and sound packaging the Wonder Twins come in, so we’ll stick with the much less flashy white mailer box for our in-box photo. The box is a snug fit for the folded-in-half Wonder Twins packaging. Once I had the inner packaging out, I was suprised to find that the slipcover (which stayed in the white box on it’s own) was the only protection for the figures. This isn’t a complaint, it was nice to only have to pull the arms and feet loose of the clear rubber bands and remove the figures from the bubble. Once I cut the piece of tape on the mailer box, I was able to remove the figures without cutting any other tape, removing any twist ties, or tearing anything at all. They came out clean, along with their accessories. And most importantly, I never had to push the two halves together! 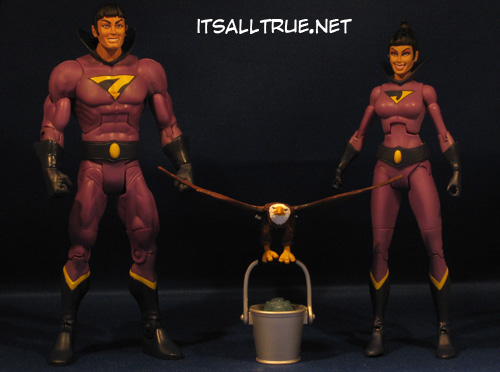 If you’re buying DC Classics, you’ve seen the articulation before. Both figures feature the standard male and female buck bodies. They do feature gloved hands, belts, collars, and their heads, but all the articulation remains the same. My Jayna did come with two right arms, but I was lucky because the hands were still correct and a little filing of the back of the elbow lets the figure’s arm work normally.

The paint work is solid on both figures. The symbols are clean and the yellows and dark blues are painted crisply at the boots, gloves, and belt lines. No issues here. 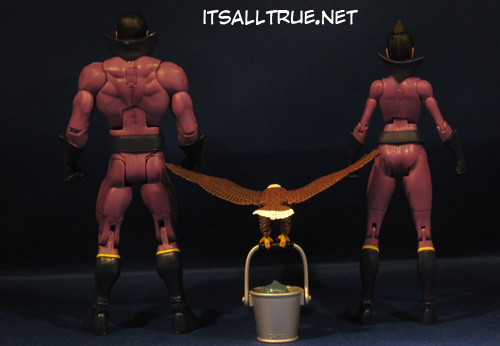 The Twins come with two of their alternate forms. I always felt Zan got the short end of the stick on their powers, and this set continues on in that tradition. He has the form of water and comes conveniently packaged with a bucket. Jayna has her eagle form. Her eagle is well painted and features articulation in both wings and talons. The only problem I have with it is that it can’t stand on it’s own. This isn’t as big a problem, because the bucket functions as a stand, but I’m thinking ahead here. If you looked at any SDCC coverage, you know this is the first of five times we get this bird. A green one comes with DCUC10’s Beast Boy, Teela has one as an early version of Zoar, and Mattel has said we’ll be seeing Screech as well as a later version of Zoar. Ideally, Mattel would come up with some type of perch for the birds like the staction versions of Zoar and Screech had. 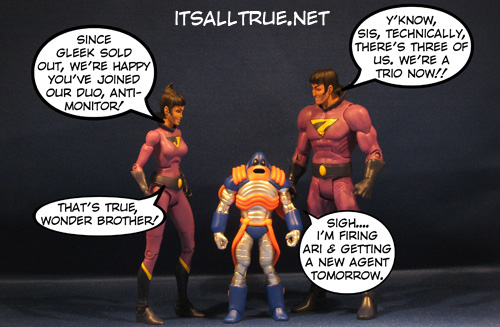 I’ve got a really good Gleek story with lots of highs and lows, but I’m going to save it. ItsAllTrue.Net has a Gleek coming next week (he’ll be our 10th and final SDCC review) and we’ll save it for then, so in the words of Mattel, “Stay Tuned!”

Overall, these are just two more figures to add to the growing DCUC collection. Love ’em or hate ’em the Wonder Twins are at least a part of one version of DC Continuity (and they did appear in main continuity in the Extreme Justice comic). I was a little annoyed having to fix the elbow on a $40 toy and the Gleek thing is still an issue even though I’m fortunate enough to have one on it’s way to me. Still, the base sculpts are good, the added details are solid, the paint work is great, and the accessories are applicable. Those are all the things it takes to make a great figure, even if it’s a figure of the Wonder Twins!