If I had to choose which Anti-Monitor figure I could have gotten from SDCC, I’d probably have gone with the bigger one. He’s a smidge more appropriate for any size DC figure collection. I bought the little Anti-Monitor as more of an impulse item (if a $10 toy can be considered an impulse buy) instead of truly wanting it. In the same why that I find a shrimpy Fortress Maximus funny, I find a shrimpy Anti-Monitor funny. So even though he may not have been bought with the same fondness I had for Egon or the Wonder Twins, he gets a quick review nonetheless… 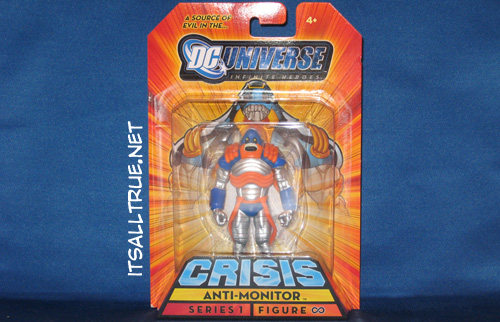 The Anti-Monitor comes packaged like the rest of the Infinite Heroes, but features some changes to his box art that mirror the upcoming Monitor figure. Instead of the hand reaching for the figure, the Anti-Monitor appears on his own box art and instead of “an army of heroes in your grasp”, his box says “A source of evil in the…”. The Monitor figure will have similar changes to his card art. If I was going to have both and keep them packaged, that would be pretty cool. 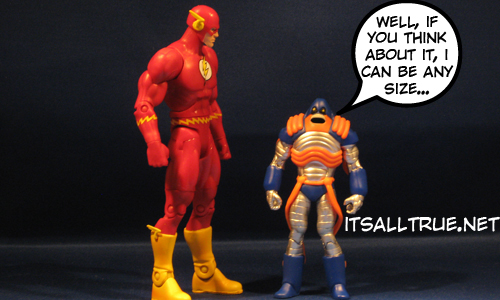 On the back of his card, the Anti-Monitor has some stats. He scores really high in strength and energy, but in terms of agility he only gets a 10. And Mattel isn’t kidding. While the regular DCIH figures could use some more movement (which they seem to be slowly acquiring), the Anti-Monitor is a step back. The sculpt keeps him from having head articulation, but that’s understandable. I think he should still have waist articulation, but that’s not what bothers me most. No, what drives me nuts is his v-crotch. I abhor the v-crotch. Personally, I blame Playmates Star Trek line for giving me that pet peeve. Great figures. Great playsets. But they looked stupid when you put them together. Why? The v-crotch. It should just be stricken as option when deciding joints. Other than that, his DCIHness is pretty standard: pin knees, pin elbows, and ball-jointed shoulders. 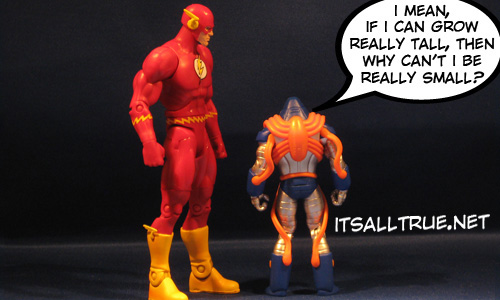 The paint work is mostly solid here. I like the colors. The silver is shiny and both the orange and blue look good on him. There’s no real bleed in any one area of the figure. The only draw back here is his eyes. They’re more than a little crooked. 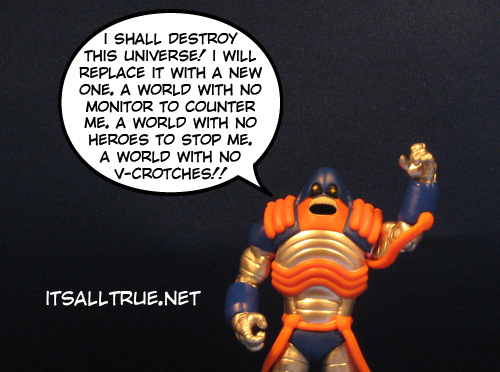 Overall, I bought him for cuteness more than completeness. If you’re buying DCIH than you need him. If you’re not, I wouldn’t start with this figure because he probably won’t keep your interest by his lonesome. He’s not bad as far as DCIH go, he’s just not as good as some of those figures seem to be getting. Personally, I’m still holding out for my DCUC C&C Anti-Monitor though (can you believe he hasn’t been one of the first thirteen C&Cs??).