Our DC Universe Classics Wave 15 reviews continue with not one, but two Starmen figures this week – the GA Starman and his son and successor, Jack Knight. As a big fan of the DC Comics golden age and the legacy characters it spawned, I was excited for both, but only one met my expectations.

The Golden Age Starman was Ted Knight, an inventor and astronomer that harnessed a special type of radiation in the early 40’s and used it to power the Gravity Rod, a device that fired bursts of energy and manipulated gravity (giving Ted the ability to fly). Ted quickly joins the Justice Society of America and the All-Star Squadron, but Ted runs into some troubles after World War II. First, his longtime girlfriend is murdered leaving him alone and then the use of the atomic bomb (which he helped create) and the destruction it caused weighs heavily on him.

He’s institutionalized after suffering a nervous breakdown. He only dons his Starman persona on and off after that, ultimately retiring when Extant advanced him to his appropriate age in Zero Hour. He returns to the spotlight as a major supporting cast member of Robinson’s 90s Starman series where we see him providing counsel (& sometimes aid) to his son Jack. Ted is the first of eight Starmen, with the sixth and seventh being his sons David and Jack respectively. We’ll get to Jack here in a minute. 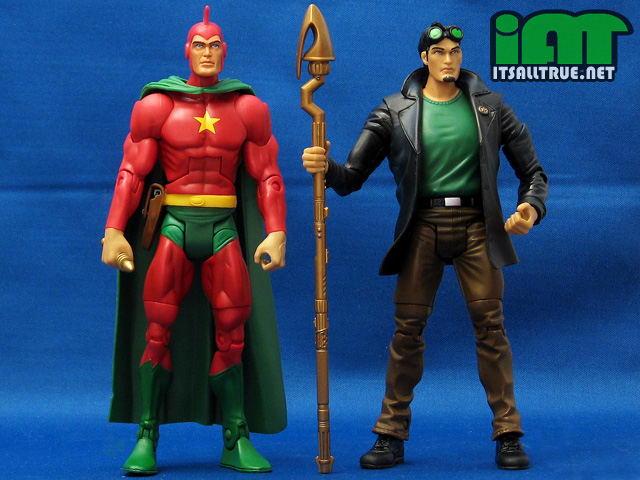 Sometimes I’m really surprised that Mattel hasn’t already made more Golden Age characters. I’m a fan of just about every era in comics – I’m all for the occasional strap or pouch and I happen to think Perez worked some magic with his detailed character redesigns, but there’s also something wonderfully simple about most of the Golden Age costumes. That simplicity directly translates to Mattel being able to make a plethora of characters with very few new pieces needed. In other words, the GA characters are right up their alley. The original Starman is a great example. This is a perfect Starman sculpt and it only took… three new pieces. The head, the cape, and the belt. 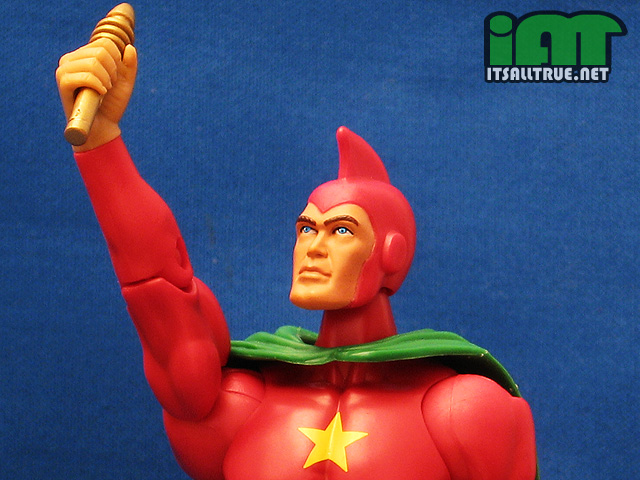 The head sculpt is easily one of my favorite parts of the figure. There’s just something about those retro finned helmets, particularly when viewed from the side so you can fully appreciate it. Two sentences in and I haven’t even mentioned the face. I love painted faces. It’s like having a good colorist bringing out the inks in comics. The 4H’s Ted Knight sculpt really shines through the paint apps, much more than it would had the head been molded flesh tone and painted red. 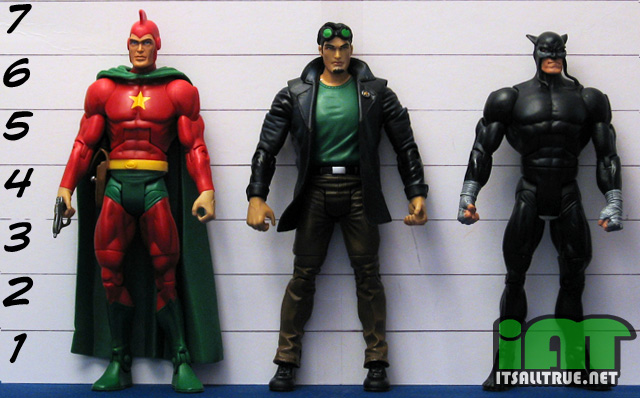 As I mentioned in my recent Marvel Legends review, painted faces are almost always superior to molded flesh tone and the two Starmen in this review are a great example of that, with Ted being the good half of that comparison. Other than his face, Ted required very little paint work for the same reason he required so few new pieces. His buck is mostly molded in the appropriate colors, but a few areas did need a little paint. The green on the boots and hips is a little sloppy, but generally in the right place. The emblems on his chest and cape are well-painted. 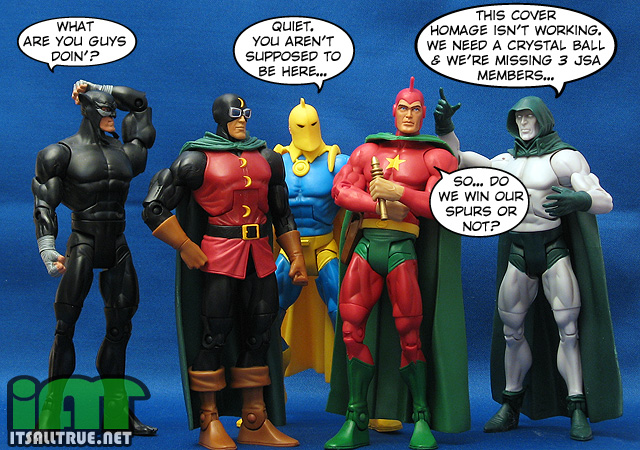 Since Starman is built on a basic buck, he features all the articulation we’ve come to expect. My Starman did come with a stuck right hip joint – this seems to be pretty common across the Starman figures based on online ‘reports’. Ted does have some really nice range on his neck joint though. He’s got decent up range and some good side-to-side tilt that makes posing him that much more fun.

Starman features two accessories. His trademark cosmic rod and a “stellar energy pistol”. We asked the Four Horsemen about the origins of the pistol and you can read about it here. But, boiled down, it’s a fun addition in a line where accessories are few and far between. The main accessory though is the Cosmic Rod. I love it and hate it. I love that it’s on model – it looks great – but my Starman can’t hold it. His buck hands are simply open to wide to grip the smaller rod. It sits in there loosely, but he’ll drop it if he’s held to far off from upright. 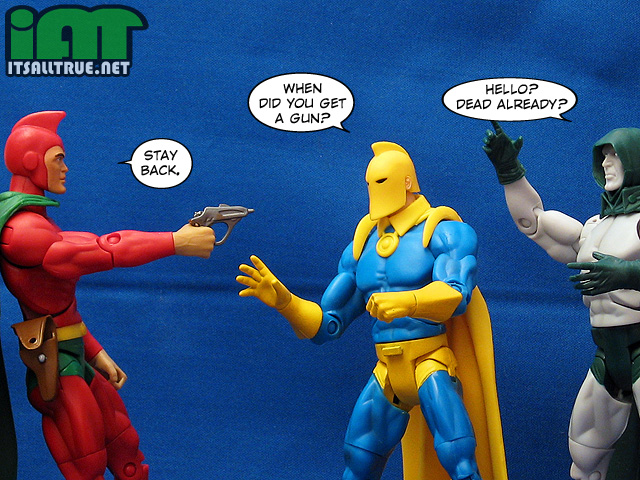 There is one other thing that comes up because of the cosmic rod; it’s the lack of an extra articulation point. It’s not just that Starman can’t hold the Cosmic Rod, but that he can’t hold in convincingly. The rod pulls Starman off the ground, it lights his way, it can be used as a firing weapon. The figure really can’t be posed in any of those actions because of the standard swivel cut wrist. Mattel is always talking about adding articulation only when it’s called for (though the new bucks seem to have a ball wrist standard) and Starman could’ve really benefited from a ball-wrist. As it i, all he can do is hole the star rod like a popsicle and loosely at that. Continue to Jack Knight…