DC Universe Classics Wave 14 is a wave without variants, so that means one figure gets a solo review. I picked Hourman because he’s a favorite of mine and because he has a ton of comic potential. He’s a smart character, but he’s still a brawler at heart. Plus, he only has powers for an hour. That’s kinda cool.

Hourman is one of the first DC characters I read about when I was a kid. Though admittedly I was exposed to most of the JLA & JSA all at once. It was in a reprint of Justice League of America #100-102 when the JLA teamed up with the JSA to rescue the time-lost Seven Soldiers of Victory. I can’t say I remember anything notable Hourman in that story. If I recall, he was sent back to Ancient Egypt with Batman & Starman to save Stripesy from slavery. And, frankly, Batman and Starman did most of the work. But I liked his costume and I liked his fighting style. He always jumped right in. I always picture him fighting a throng of enemies all at once. One of the regrets I have about this review is that I don’t have a reserve of 6″ scale army builders to pile on Hourman in a great fight scene. 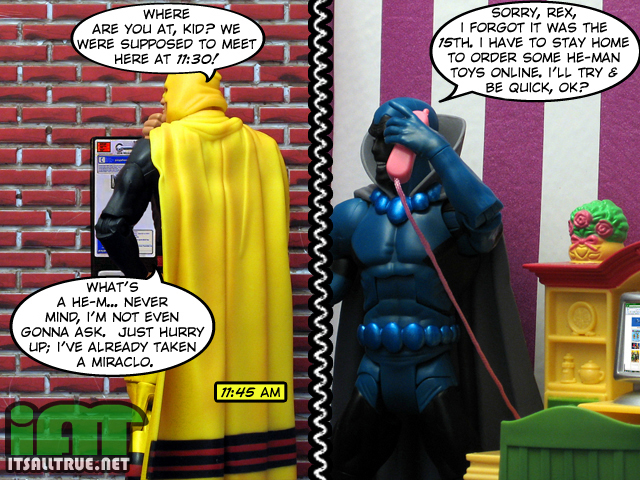 Hourman first appeared in 1940’s Adventure Comics #48 as Hour-Man (and was often referred to as “The Hour Man” or Tick-Tock in his subsequent adventures). His origin is simple, at least on the surface. Rex Tyler was a chemist that developed a hormone/vitamin supplement that caused a temporary (one hour) increase in strength and speed. He used the pills, dubbed Miraclo, to become a superhero. But as the decades passed by, this simple origin started to take on a wonky feel as social views changed how it was perceived. Was Miraclo addictive? Was Hourman more addict than superhero? These issues were resolved in a variety of overlapping ways – that his powers were inherent and the pills simply removed a mental block, he got a black light that would activate the latent Miraclo in his system, and also there was the overly simple non-addictive version of Miraclo.

Rex was killed by Extant during Zero Hour and was ultimately replaced by his son Rick. Rick was written into bad story after bad story of Miraclo addiction. I tend to hate Rick stories. In 1997, I was ecstatic when Morrison debuted the time-travelling android Hourman III in the pages of JLA. I loved the new Hourman, much as I had enjoyed the old one as a kid. Unfortunately, his adventures were short-lived. We’ve seen a lot of killing/marginalizing legacy characters to get the original back at DC lately, but Hourman III took that to a new level. The modern Hourman went back in time and directly took Rex’s place and died so that he could live. Ouch. It’s been six years and I still hate that story. Particularly, when the result was that Rex lived to spend his days as a retired superhero and Rick could be Hourman. Lame. 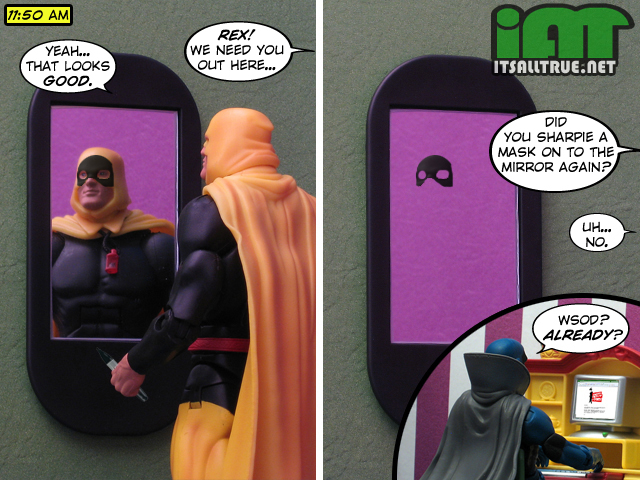 Before we get into the meat of the review (this is a toy review, right?), there is a debate about how to portray Hourman in action figure form. The disagreement is essentially a comic book coloring debate – blue vs. black. Doe Superman have blue hair or does Batman wear black underwear? Hourman is almost always depicted with the front of his mask blacked out. Officially, this is a “shadow” – drawn in to break up the yellow hood. In that respect, this figure is correct. The hood is all yellow and the figure is spot-on. But let’s face it, there is almost no easy way to cast a perfect shadow directly on the front of someone’s face. So should Mattel have painted it? I don’t know for sure, but I’m leaning towards yes. I’m getting used to him standing there on my desk all yellow, but it just doesn’t look quite right. Particularly in the small gaps between his cheeks and the hood. 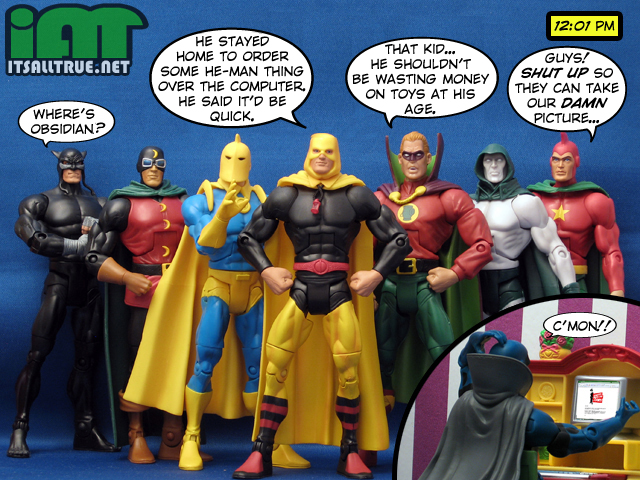 Like I mentioned in my Starman review, a lot of the Golden Agers don’t need that many specific pieces to capture their costume details. This is also true for Hourman. He’s the standard buck with a new belt, hourglass necklace, a collar, and his head.

All the new pieces are sculpted well. The hood lays just right to look like there’s really a head in there and I like that it bunches up against the cape in the back to avoid a bonnet look (I’m looking at you, Skeletor). The cape is a reuse of Starman’s with a collar piece glued to the top. It looks okay flat, but I tend to think of Hourman’s cape/hood being more like Spectre’s and I would’ve liked to see the great cape they sculpted for Spectre used here. The collar is glued to the back of the cape with the necklace running through it, so the necklace isn’t immediately removable. 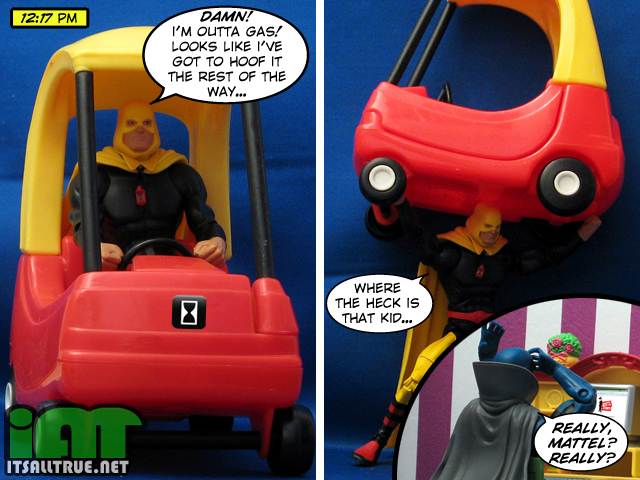 There’s not much paint to Hourman. The main body of the figure is mostly cast in black while the head and cape are cast in yellow. It looks good, but you’ll have to keep an eye on those legs as scratches to the yellow paint will reveal the black plastic underneath. Also, I did leave the first Hourman I found behind because of a messed up chin, but this one some has nice paintwork on the face. The red patches on the boots and the stripes on the back of the cape finish off the costume details.

Articulation is standard for the line, though the head has limited up and down movement because of the bunched cape. It looks good, but it does limit the functionality. The cape is sturdier than the other capes in this wave, but that may vary from figure to figure. My Hourman appears to have been made a few months before the other figures I bought and at a different. The factory that made Hourman is the one that Mattel used for most everything last year and the cape’s consistency is more like a 2009 figure than a 2010 one. 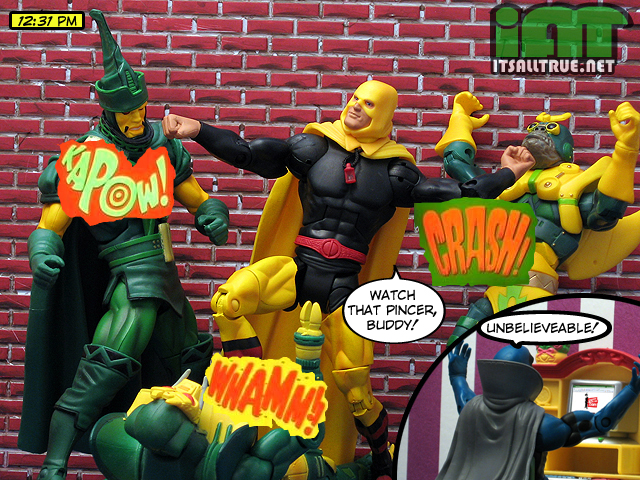 I’m as excited to own this Hourman as I was the DC Direct one back in 2001 (which coincidentally had the black painted mask). The excitement back in 2001 was because I felt so close to getting the founding members of the JSA as figures. At that point, DC Direct had already made seven of the eight original members. But it took DCD six more years to make the last one (and he ended up being out of scale). Right now, we’re halfway to having the founding members in DC Classics. I really want to assemble the Justice Society and I hope that Mattel doesn’t drag the JSA out too much longer, but I have to admit – I love the variety of DC Classics.

The sculpt and paint recreate him faithfully (except for that whole shadow on his face deal) and he looks great in JSA group shots. He feels sturdier than some of the figures I’ve bought this year, but that could be my head playing tricks on me since I know he was produced at a different factory. Either way, he’s a nice addition to the line and I’m ready to put him with Starman & Batman, if only Mattel would give me a Stripesy for them to save from the Ancient Egyptians. 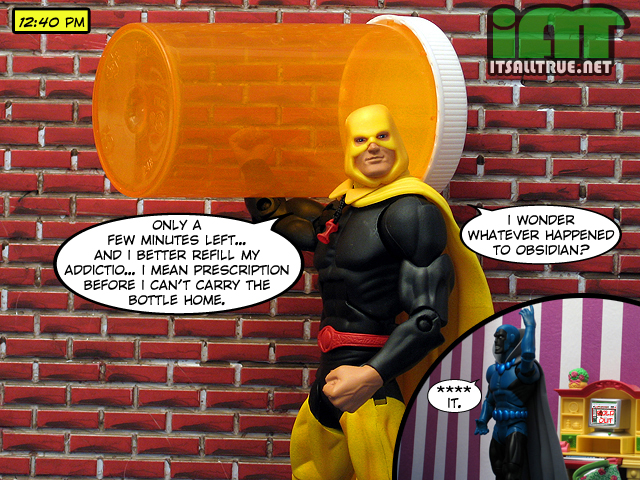