Between filled online pre-orders and store sightings, DCUC12 has been out for nearly two months, but many fans got their first opportunity to order it just a week ago via MattyCollector.com. If you’re still without, the set is still available. With the early waves, Mattel strived to make a “play pattern” out of the first two figures in each wave. With the A-listers being relegated to All-Star repacks, that may not be as important to Mattel anymore, but it’s still true for these two. See, the Spectre put Eclipso out of a job.

Eclipso first appeared in 1963 within the pages of House of Secrets (#61) and was created by Bob Haney (Teen Titans) and Lee Elias (Havey Comic’s Black Cat). Originally, Eclipso was merely the Hyde to solar scientist Bruce Gordon’s Jekyll. Gordon had been scratched by jungle priest with a black diamond that caused his darker self to manifest during eclipses. His villainous half would emerge and basically just try to screw with Gordon. The two were “equally matched”, because they shared the same intellect, and Gordon nearly always foiled Eclipso’s schemes with little effort. In short, the original Eclipso wasn’t really a threat.

But over the years, DC, through a series of revamps and retcons, made him more formidable. The Darkness Within crossover turned him into a long-lived demon of vengeance that was merely toying with Gordon to bide his time. In this incarnation, he would use black diamonds to possess most of Earth’s heroes in a failed bid for world domination. Around the same time, John Ostrander reworked Eclipso’s origin a little bit within the pages of The Spectre. In this series, and still today, Eclipso’s story begins when God’s sought to give his wrath physical form. Eclipso carried out God’s wrath (think Noah and the flood) until the “kinder, gentler” Spectre took over. The Spectre banished him into the aforementioned black diamonds that he would later use to control Bruce Gordon and others over the ensuring centuries. Eclipso has possessed others including Alex Montez and Jean Loring, but inevitably, he always ends up back with Bruce Gordon.

If you’re familiar with the Spectre, you’d probably get a chuckle out of anyone calling him kind or gentle. The version of the Spectre represented by this figure is from DC’s Golden Age. The Spectre was created by Jerry Siegel (Superman) and Bernard Baily in Moe Fun Comics #52 (1940). Jim Corrigan was a New York City cop that was murdered by the men he was investigating. Refusing his spot in the afterlife, God made Corrigan the latest human host for the Spectre, his (second) Spirit of Vengeance. Corrigan would avenge his death, and that of many others, over the ensuing years. He joined up with the Justice Society and became a valuable ally for the heroes of the DC Universe helping to keep the Earth alive without the sun during Final Night, and most notably, arm wrestling the Anti-Monitor at the beginning of time to ensure the creation of the universe itself. This version of the Spectre ended when Corrigan took his place in the afterlife and the Spectre entity was bonded with (then deceased) Hal Jordan. 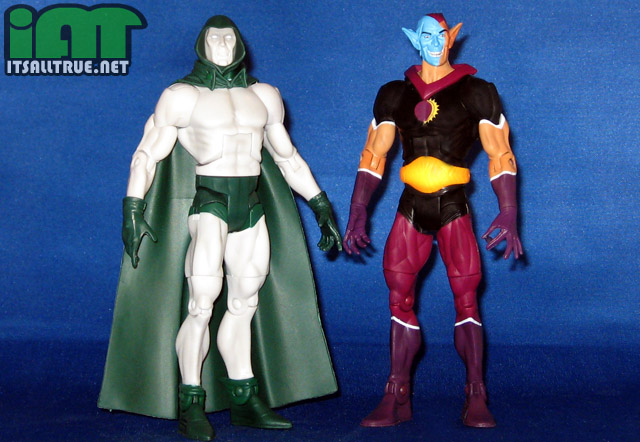 Eclipso uses a standard buck with a right hand from Deadman and a new left hand (with jewel), textured belt, collar, and head. The hand is sculpted in a way that you can line it up with his left eye, as it should be, and the collar and belt fit in seamlessly. The head sculpt originally created a little controversy, with some fans wanting it shortened a bit or wishing it were slightly less maniacal. I’m happy with how it turned out, though sometimes it looks like Eclipso is just happy to see me more than he is ready to cause mayhem.

The Spectre also uses a basic buck, with new calves, hands, cape, and head/hood all faithfully recreating the Spectre’s classic look. The 4H have done a great job on giving Spectre a ghastly face and the deep recesses in the hood make for some neat shadows in low light. Plus, the cape and cowl are separate to allow the head to move freely. As to the neck, it feels like it would have some up/down movement and decent tilt if it wasn’t blocked by the collar, so I’m giving this one to Mattel. That means that while head articulation is not perfect in each figure, all of them except one, Dr. Mid-Nite, are improved over the DCUC10 and DCUC11 offerings.

Eclipso’s paint is clean. The facial details and the blue eclipsed paint are some of the best on the figure and that helps sell his paint apps more than anything. The white lines are a little fuzzy here and there and there’s a scratch through his symbol, but that comes with the territory when you order online.

Spectre doesn’t have too many opportunities for good or bad paint with most of the colors being specific to the molded pieces. Still, the few cut lines and the light wash over the body are sharp. The big highlight here is the bright white eyes and shadowed brow. Those were smart decisions on the figure and really amp up his creepy factor. 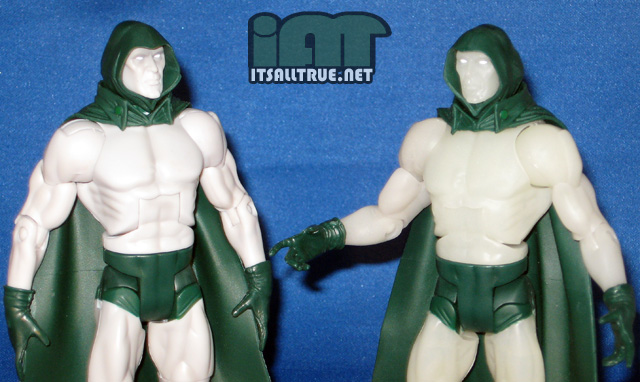 Spectre was the 70/30 variant for this wave. Originally, I only wanted the white Spectre, but BBTS filled my pre-order with the GITD variant and I had to track down the regular version at Wal-Mart a few weeks later. The GITD one has grown on me a bit since I received it. I like the creepy translucence green color, but I think he needs to the stark white Spectre next to him to really bring those colors out, so it’s not really a plus. The white one is easily the better of the two, though GITD is always cool in my book. 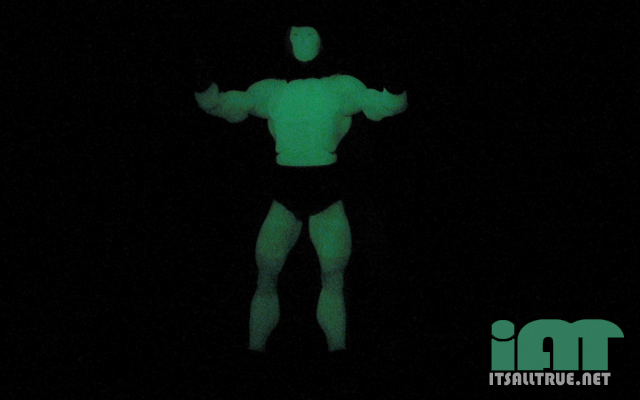 Neither of the figures come with any character specific accessories, though Eclipso does have the requisite black (clear purple) diamond molded to his hand. Granted, these two aren’t exactly ripe for obvious accessories, but Spectre could have included the Spear of Destiny (the one weapon that can stop him) while Eclipso could have included the Heart of Darkness (the giant jewel all the black diamonds come that serves as his prison).

But instead, we get buttons! Yay. Spectre’s button is fairly straightforward. The cover is from All-Star Comics #2 in which the Spectre stops the villain Kulak from destroying the Earth. Eclipso, however, is another example of a button having nothing to do with the character. It’s from JLI #24 which is only notable for giving hints of Max Lord’s power of persuasion and the first mention of Justice League Europe. Eclipso had his own series as well as appearing on numerous House of Secrets covers, so I’m not sure what they’re going for here. 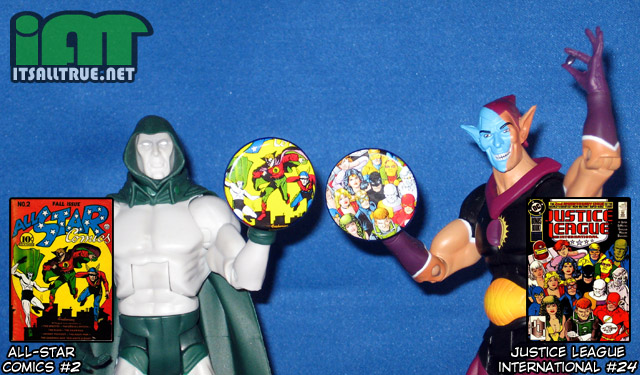 Overall, these are two more nice figures to add to your collection. I’m particularly happy with the Spectre and looking forward to getting even more JSA members in DCUC14. I’ve never been a big fan of Eclipso, but the 4H did a great job with the figure. If you’re a fan of these two characters, you should be happy with the results and even if you’re not, these are still two more sharp figures for your DC shelf. 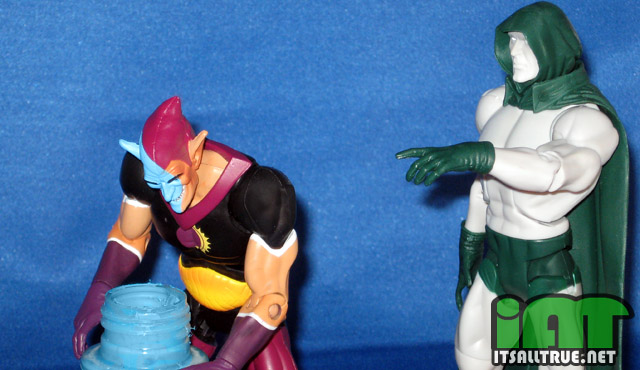