I like to do these DCUC reviews in groups of two because it lets me get them on the schedule a little quicker. Usually, I try to group the figures in sensible duos just because it makes them easier to write about, Darkseid and Desaad, for example. But it’s not always easy to do that. For this review, I’m left with pairing up Iron andMary Marvel. There’s no obvious connection here, save one. This review contains the best and worst figures from DCUC12.

You probably knew instantly know which one was which, so I won’t tease you. I was happy to hear Iron named on the leaked lists, I was excited to see the first images, and I’m blown away by the figure in person. Mary Marvel is a different story. I definitely wanted her in my collection, and I don’t think she’s a terrible figure, but the figures has a few issues. 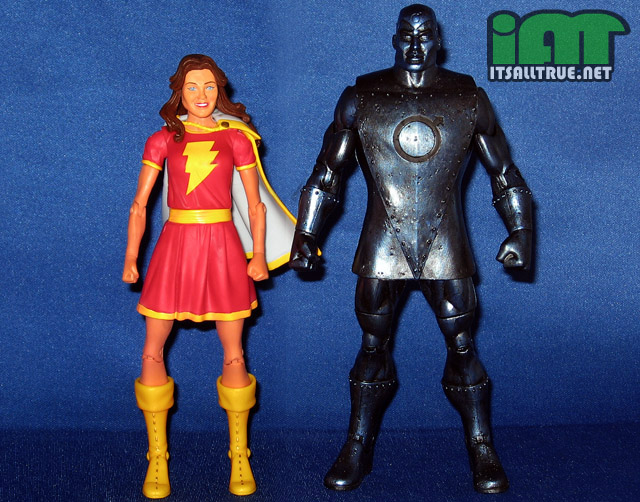 Iron first appeared (with the other Metal Men) in 1967 in the pages of Showcase Presents. The team was created by Robert Kanigher,* Ross Andru, and Mike Esposito. The Metal Men are sort of on the bubble of comic book awareness. By that, I mean they’re always around in group shots, most comic fans know who they are, but they get their origins messed with now and again and get killed off more than they should. Luckily, since they’re robots, that last part isn’t as much of a detriment as it can be other less fortunate characters! Regardless of which version you might have read, Iron is always the big guy that gets the job done. Even when we first meet him, he tells us that he’s the “muscle”, a reputation he’s lived up to over the years. He shares the properties of his namesake element which provides his great strength, but also makes him susceptible to rust.

* – Just a special shout out to Robert Kanigher for creating so many of the DC characters that we love here at IAT. Just to name a few… he crafted the Sea Devils & the Haunted Tank (w/ Russ Heath), Poison Ivy, G.I. Robot, Enemy Ace, Viking Prince, the Losers, Lady Cop, the Unknown Soldier, Black Canary, and of course, along with Joe Kubert, Sgt. Rock. All of those need DC Classics by the way. Yes, even the Haunted Tank. I’m serious.

Mary Marvel was originally published by Fawcett Comics way back in 1942 as the long-lost sister of Billy Batson (Captain Marvel) who shared the power of Shazam. Her early adventures quickly came under threat when National Comics (DC) sued Fawcett claiming that Captain Marvel infringed on the Superman copyright. Superman was a raging success for National and they had some success knocking down other superhero characters during that time. In 1939, Fawcett ceased publication of Master Man due to threat of litigation, for example. But in 1941, when National went after Captain Marvel, Fawcett fought back. The legal battle would last until 1953, with Fawcett agreeing to settle out of court after losing an appeal. Most of the Marvel family went unused for the next twenty years until DC licensed, and later purchased, the characters for inclusion in the DC Universe. The characters have never regained their Fawcett popularity and due to legal restrictions with Marvel can’t even be called by their proper names outside of the comics (Mary is labeled as Mary Batson on her packaging). 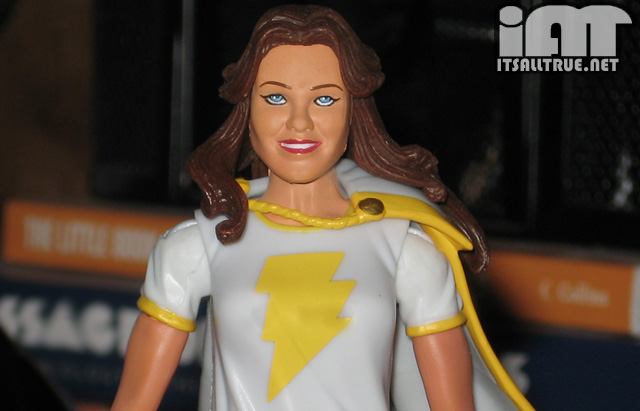 Just a quick note on Mary’s eyes. I didn’t realize until I got into photoshop for some “post-production” that her eyes were creepy in nearly every picture. I’ve had this problem with a few of the latest DCUCs where my camera grabs on to the large white glint painted into their eyes. I’ve added a clearer shot of the white Mary Marvel above so that everyone can see her face without creepy eyes.

And we’ll use that as a segway into talking about Mary’s sculpt. I have mixed feelings about it. I think the problem is a combination of all DCUC women being a little off and along with Mary being scaled down. The sculpt in-it-of-itself is has some great detailing. The dress looks sharp and the face is well done. But as a whole, the figure is a mess. First, her height is off. In the picture below you’ll see that she is short (as she should be), but check out the sashes on her and Captain Marvel. They’re at nearly the same height. All of her “shortness” comes from the torso leaving her with incredibly long legs. Think about how long her thigh is from hip to knee and you’ll see that her knee is further from her hip than her head. She has the standard “skinny arm syndrome” that affects nearly all the DCUC women including extra tiny (but well-defined!) hands. The cape is another great piece, but it flares out and robs any display of shelf space. She’s a bundle of little, localized frustrations. 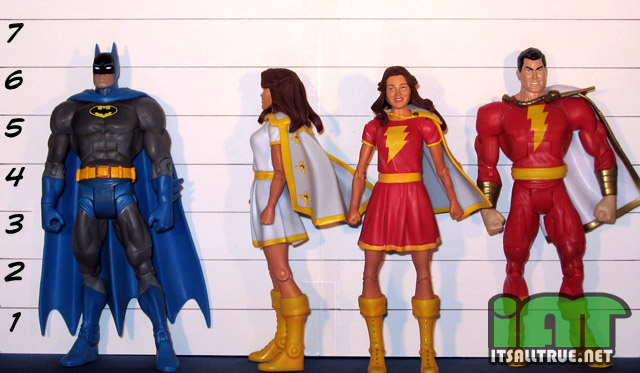 And then there’s the head sculpt which has been derided on more than one message board since it was first shown. Personally, I think it’s a great sculpt of a reasonably attractive woman, but that’s also what I don’t like about it. I just don’t think it looks all that young, or at least not as young as I think Mary’s face should look. I am a big fan of the smile though – glad to see that on both Marvels so far – and I love the hair sculpt. Again, the usual 4H attention to detail and craft is there throughout the figure, but just standing back and looking at it, all those little annoyances start to add up.

Iron’s sculpt though is impressive up-close and overall. He uses the standard buck, but with a new head, a new torso “sleeve”, new forearms, new calves, new feet, and new hands. The hands are funny, in particular, because they’re made out of die-cast metal. I’m not sure why, but it’s cute. Usually, at this point, I say that the new head is the centerpiece of the figure, but that’s not the case with Iron. The centerpiece is the amount of detailing that covers nearly the entire figure. All the new parts are textured with dents and scratches that befit a rough-and-tumble Metal Man like Iron. In addition to that high level of detail, we’ve got rivets in all the right places, an etched symbol, and a great head sculpt, though I do think it looks a bit like Teal’c from Stargate when he’s being a bad guy. 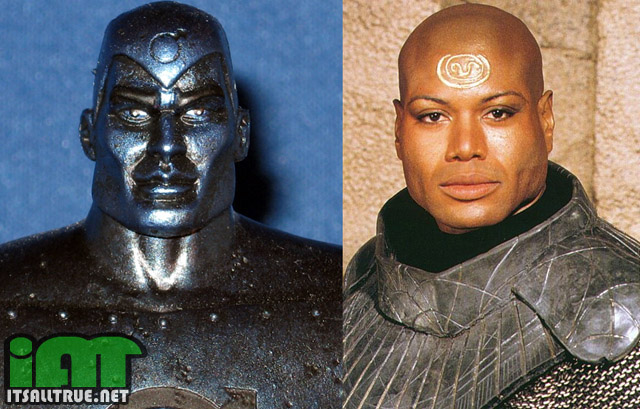 I didn’t have any real paint issues on either figure. The dark metallic blue and black wash on Iron really finishes off the great sculpt. It’s particularly nice on the few parts of the basic buck that are exposed and helps the figures new and old parts blend. Mary’s paint job is similarly well done, but I don’t think the paint on her face best showcases the sculpt underneath. I can’t put my finger on it, but I think a talented customizer could rework the paint on the face and really let the head sculpt shine. There also appears to be a running change of some kind to Mary as some collectors are finding her in a darker shade of red then the one reviewed here. Continue to Page 2