So yeah, I wasn’t looking forward to DCUC12 back when the photos were leaked. Desaad, I was happy with, but Darkseid was a different story. It’s not that there was anything wrong with the figure, I just let myself get excited thinking it might be more true to the Super Powers version. I started to think about the cape, the medallion, and the general look of the Super Powers figure. Y’know, the one that got me interested in Darkseid in the first place and that’s what I started hoping to get. I love that version. When I read Darkseid’s appearances in the comics, I still hear Frank Welker’s deep, husky Darkseid voice.*

* – Props to Michael Ironside though, I loved his rendition of Darkseid in STAS/JLU. It’s just a Super Powers thing. I still hear Batman as Adam West and Cyborg as Ernie Hudson. Thankfully, I don’t hear Casey Kasem for Dick Grayson anymore! “Dear Nightwing…” 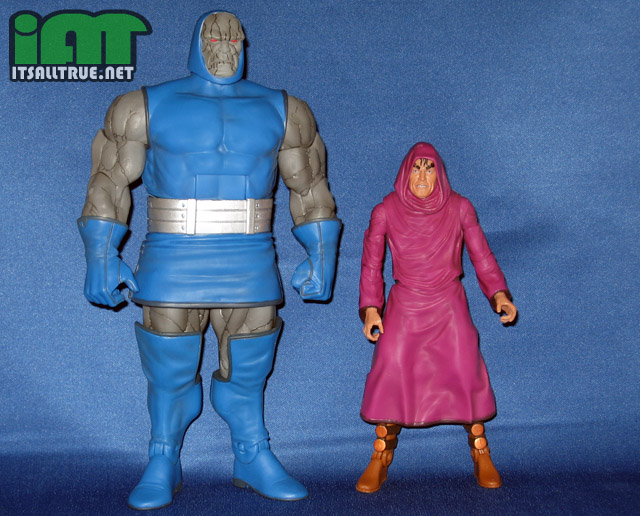 Well, when I saw the production samples and saw what looked like nothing more than a bigger DCSH Darkseid, that was worst case scenario. Partially, because I was disappointed and partially because I don’t think Darkseid should be all that massive. Heck, I don’t even really like seeing Darkseid brawl. Okay, maybe as a last, last resort. But the guy’s a manipulator, it should only get to that point after total failure! But I digress…

Anyway, now that I have Darkseid in hand, I’m singing a different tune. Don’t get me wrong, I’m not saying that I was mistaken in my Truetorial. I’m still a firm believer in a smaller Darkseid,* but the sculpt, as expected, wowed. And perhaps, even better, he wasn’t as tall as I was expecting. That made me happy.

* – How else could he sit on Mary Marvel’s couch or burst through the Kent family front door?

Darkseid is one of the preeminent DC Comics villains. He brutally rules his home planet, Apokolips, and manages the eternal war between his planet and the New Gods of New Genesis. His primary goal is to give the universe perfect order by obtaining the Anti-Life Equation and eliminating freewill. This has caused him to come into conflict with plenty of Earth’s heroes, most notably Superman, Wonder Woman, Martian Manhunter, the JLA, and the Legion of Super-Heroes in the 30th century. Not bad for a guy that first appeared in the pages of Superman’s Pal Jimmy Olsen (#134). In addition to being a master strategist, Darkseid has equivalent strength and stamina of Superman. He also possesses the Omega Effect which are basically dess ex machina eyebeams that have a wide variety of uses. It’s okay, Darkseid’s still cool, it’s hard not to be when your partially based on Jack Palance & Richard Nixon. 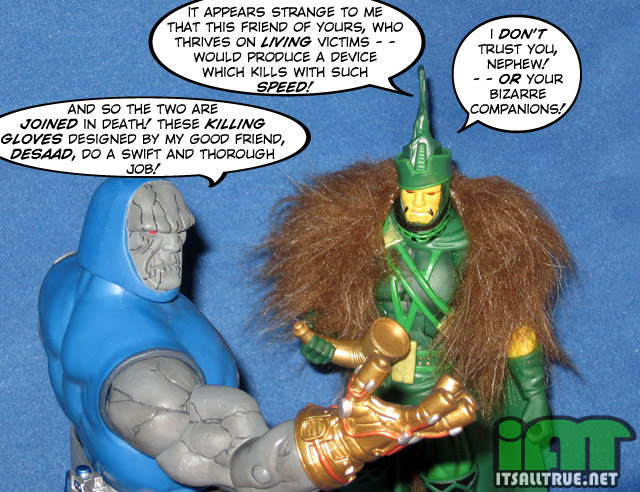 Desaad, another Kirby creation, first appeared in Forever People #2, one of the books in Kirby’s Fourth World series. Desaad is essentially Darkseid’s right-hand man and has been serving Darkseid since he was a small boy. Desaad is probably most known for creating either elaborate torture devices for personal experiments or weapons for Darkseid to use on his conquests. Desaad’s an interesting character because he’s so spineless that he’ll turn on Darkseid and only to turn back later. Desaad was voiced by Rene Auberjonois in both the Super Powers and Justice League cartoons.

I’m not entirely clear on what’s happened to either of these characters in the last few years. They’re either all dead, really dead, or all music moguls, I’m not sure.

Above, I mentioned that I thought Darkseid was simply a bigger DCSH one. He’s not. Darkseid is an all-new sculpt. While there are some similarities between him and the DCSH version (pictured below) you can chalk that up them both being Four Horsemen Darkseids. I liked the old figure, but I have to admit that this one is an improvement. It has a much more classic head sculpt and smoother/finer detailing on the cracks in his rocky exterior. Most of the costume pieces echo their smaller DCSH counterparts, but there are a few areas, like on the hem of the gloves, where they have subtle differences too. 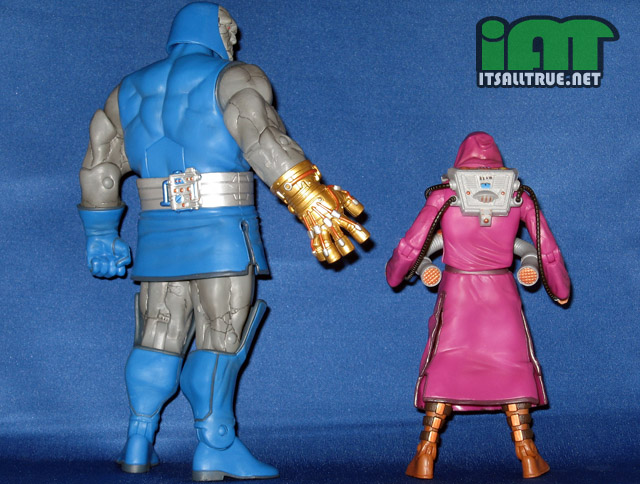 Desaad is a clever reuse of the Sinestro buck, but he still has plenty of new pieces. His head and all of his arms are original. As is his two-part robe and his calves. I was surprised by the calves. I was expecting to see that the Desaad strapped boots would be replicated by a new piece being put over the calf, but that wasn’t the case. While they’re reminiscent of Sinestro’s boots, they’re also all-new. The robes are made of a softer plastic and bend with the figure easily. The head itself is a great piece, having captured Desaad’s sniveling face and oily hair very well. 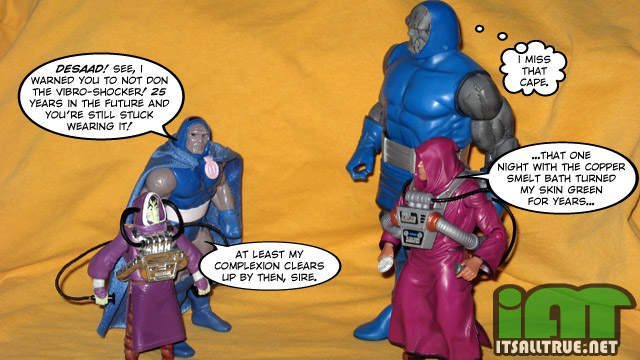 I had no paint issues on either figure. Most of the pieces are molded in the appropriate colors (I’m a big fan of taht). All of the tubing on Darkseid’s tunic and the cracks in his rocky skin are all painted well despite the difficulty. Desaad has even fewer paint apps, but all were done well on mine. The paint on the eyes and exposed teeth on Desaad really sell the head sculpt. The copper on the buckles are also painted very well. But the best part of the paintwork on Desaad is that he doesn’t have a green face! 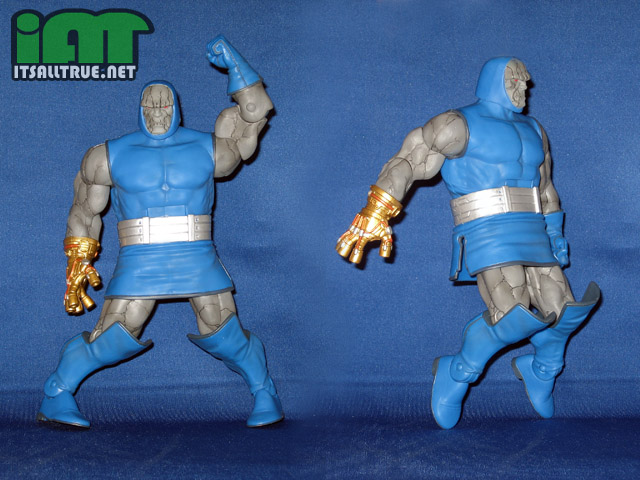 Darkseid has the standard articulation from the waist up and the knee down and there’s very little restriction despite Darkseid’s bulk. The one major change to Darkseid is the hip articulation. I’m a big fan of the hips that DC figures use. I think they work well and blend in well, but Darkseid doesn’t use those. Since he’s skirted, Mattel & the 4H can (and did) use the MOTU articulation on him. The MOTU artic generally works better, but the exposed hips are rather unsightly. The hips are ball-joints with a peg that extends into the thigh. While this removes the thigh cut that many fans find unsightly, it gives him those strange basketball hips found on Marvel Legends. That’s where the skirt comes in. It perfectly covers the articulation.

Desaad features standard DCUC articulation. Everything works well, including the ab-crunch and the waist swivel which were saved by the robe being cut in two pieces. I also like that his arm range is so great that he can not only use the vibro-shocker appropriately but he can also fold his arms behind his back if you’re not interested in the accessory.

Both Darkseid and Desaad can look down. And Desaad has slight side-to-side tilt, so that’s two more figures that have increased head articulation. So far, we’re 3-1 Fixed on DCUC12 with Doctor Mid-Nite being the one figure that has limited neck articulation. Sucks to be him, or a fan of him at least. 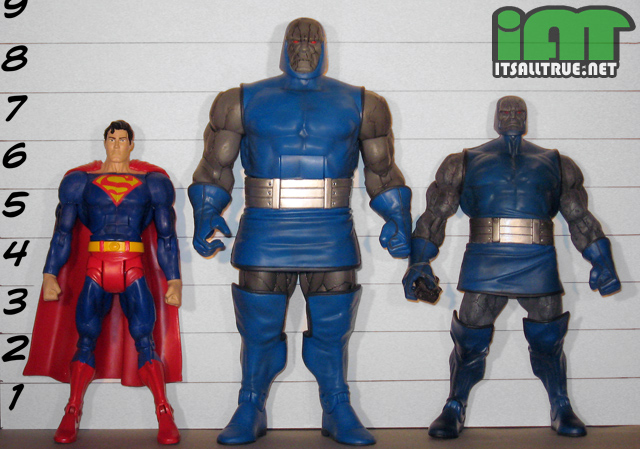 Okay, so the issue of Darkseid’s scale was one of my more popular Truetorial’s last year. I was really concerned that he’d be too big. I’m not a fan of the handful of super-tall Darkseid appearances. Admittedly, I’d have liked to see this Darkseid be a hair shorter, but he’s not nearly as big as what I was worried about. He’s just a bit over 8″ which splits the difference between his classic and modern heights. It also echoes the height difference found between the Super Powers Darkseid and the rest of that toy line. That’s cool with me.

Desaad is listed at 5′ 11″ in the comics and the figure is just about on target for that. 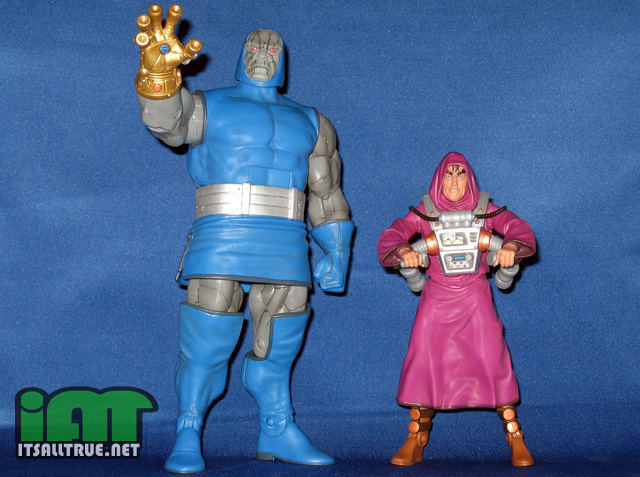 Desaad has one accessory, but it’s a cool one. The classic vibro-shocker. The piece is a great update of the vacuum-metalized one from the old line with a lot of the controls and dials being reused/updated by the 4H. The new paint details really help draw out those details too. I’m very happy with it. And since it’s removable, that’s even better.

A nice thing in this wave is that we get a C&C with accessories! That doesn’t happen very often. Darkseid includes the Killing Glove (which he used to help jump start a new war between New Genesis & Apokolips) and a mother box that clips to the back of his belt. When I complain about accessories, this is exactly what I want to see. Both of these items are terrific additions to the line. In addition to being great sculpts with great paint jobs, they’re both items that would count as artifact-type accessories. We really can’t get enough of those in this line. 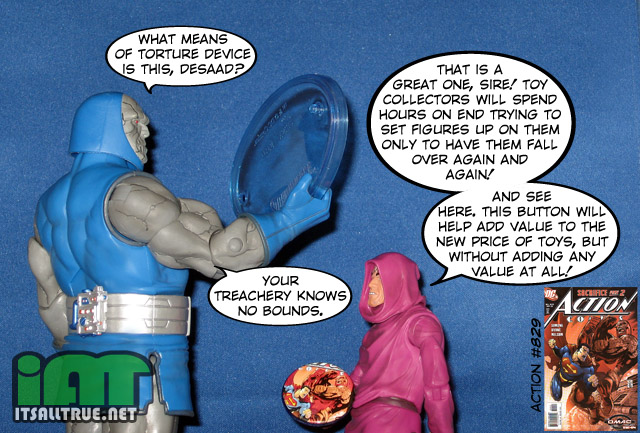 Since buttons aren’t accessories, we’re just going to cover them quickly in their own section. Desaad’s button is from Action Comics #829. It’s a story penned by Gail Simone that has Superman fighting out a series of hallucinatory battles while under mind control. In this issue, he fights Darkseid, though he’s actually beating the crap out of someone else. It’s a good issue and it’s been reprinted in the Superman: Sacrifice TPB. I like the issue, particularly because the Darkseid fight is a hallucination.

I’m still not sure what decision making process went into these buttons. Mid-Nite’s was perfectly appropriate, but Copperhead’s was completely unrelated. Desaad doesn’t appear in Action #829 and while Darkseid does, it’s only a hallucination of Darkseid. I don’t know. I’d be happier with the buttons if they were more character specific. 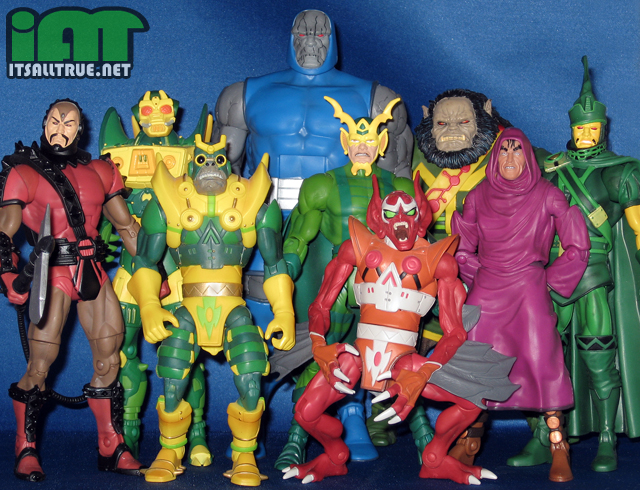 Overall, Desaad is a perfect rendition of the sniveling coward we all know and love. His vibro-shocker accessory and the articulation to use it is icing on the cake for Super Powers fans.

Darkseid got me. I admit it. I wasn’t planning on replacing my DCSH one, but it needs to be done. This version, while still a little too big for my tastes, is just a better rendition of the character and I can overlook a half-inch too tall as easily I did the first one being a half-inch too small. I’m going to display him with his regular arm (so glad that was included), but his Killing Glove will have a prominent place on the shelf since it’s exactly the kind of accessory I want to see in this line. 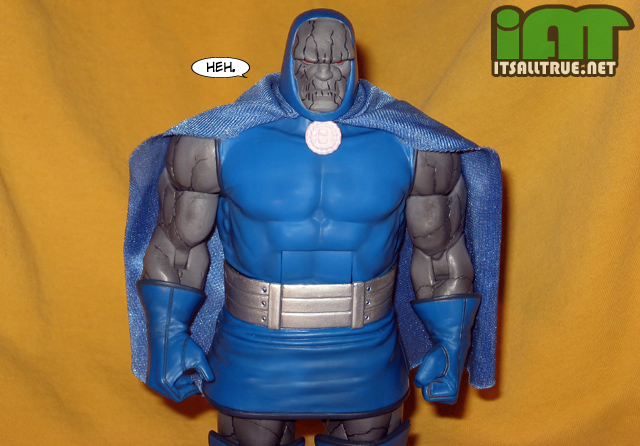