I’ve come to a realization with my recent purchases of Star Wars: Vintage Collection figures: I love that line. With superb articulation and great sculpts this may be the best toy line on the market today. But my Star Wars shelves will never be complete without Spaceballs figures.

It’s been twenty three years since this Spaceballs grazed the silver screen, but as a kid I saw it first on the magic that was VHS. Being only eight, I don’t remember a whole lot from that first viewing. I’m sure most of the adult jokes were over my head, but I do remember thinking Pizza the Hut was slightly disturbing, that Rick Moranis flying head first into a computer console was hilarious, and wondering why did Dark Helmet have toys that didn’t exist? That seemed a bit unfair. 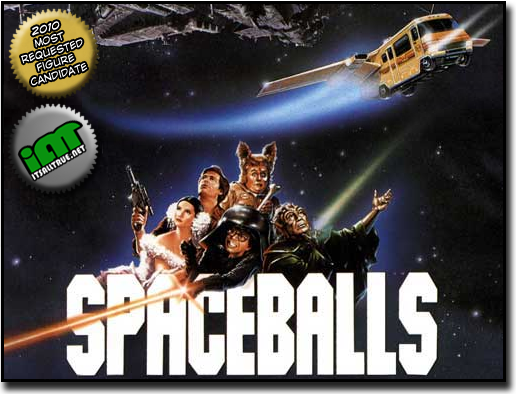 Now, two decades later, I can appreciate the movie on a different level – I would say a more mature level, but I don’t think any Mel Brooks movie can be considered mature. But one thing is still missing. In all these years, no company has ever made figures based on the film. How can that be?

So, what I’d love to see is one wave of Spaceballs figures: Captain Lone Starr, Barf, Lord Dark Helmet, Princess Vespa, Dot Matrix, and of course Pizza the Hutt. And what better way to bring the joke full circle than by having these figures produced by the fine folks at Hasbro? Not only would they look perfect on the vintage themed cards, but they would make for some interesting eye-candy on collector’s display shelves. We all know Lone Starr, Solo, Barf and Chewbacca would go out drinking together. Maybe with a little Schwartz luck, and a lot of strange decisions at Hasbro, we can finally make that happen…

20 thoughts on “Most Requested Figures:
Spaceballs”