Something unexpected happened to me a couple months ago. AMC released their first trailer for The Walking Dead and I was blown away. Just two episodes into this new series, one thing is very clear to me. Some company needs to start making toys of these characters right now.

The Walking Dead comic book has been ongoing since 2003, but I’ve just never gotten around to picking it up (something I’m amending now). I think it’s due to the fact that there is just so much zombie media out there, most of it mediocre at best, that I feel a little overwhelmed by it all. I’m a zombie fan, but I’m more of a fan of good story telling. It seems the majority of creators use the subject matter of zombies to explore the goriest ways of dismemberment rather than character development. There’s only so much bad zombie material that I can slosh through before giving up. But then something like The Walking Dead comes around, and my faith in horror is restored. 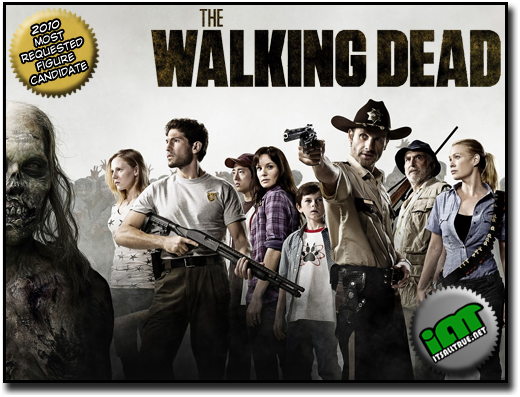 When I first saw the trailer for The Walking Dead, I couldn’t believe this was a TV show. Everything about the preview looked like a Hollywood movie, and I couldn’t wait until Halloween for it to begin. The danger with becoming enamored with a product before its release is that there is a high possibility for a hard let down. (Yes, I’m looking at you 2010’s The Wolf Man. How could a movie with Anthony Hopkins and Benicio Del Toro be disappointing? …sigh…) But I was happy, and a little relieved, to watch the first episode live up to my expectations. I was more ecstatic that the second episode was even better than the first.

What I love most about this show is the main character, Rick Grimes. Just two episodes in, and the writers have done a great job of not only making this character likable, but giving him a moral compass that’s believable and not too Pollyannaish. The character of Rick didn’t experience the loss of humanity that everyone else did, he just woke up in this new world with the morality of the one that’s been lost. He doesn’t just see the nameless horde of monsters in front of him, but the people they once were. Andrew Lincoln, the actor playing Rick, expertly portrays the emotional struggle and physical unease of the character.

AMC has a success on their hands, and they know it. The Walking Dead has already been renewed for a second season of thirteen episodes, and what would go better with that than toys? I would love to see a line based on this show. Main characters like Rick, Lori, Shane, and Glenn can anchor waves made up of two or three various zombies. Not only will you get your favorite characters, but also a horde of walkers to go with them. This would be a perfect line for the direct market, not only for those comic fans but also us new TV converts.

4 thoughts on “Most Requested Figures:
The Walking Dead”