Our fifth DC Universe Classics Wave 15 Review focuses on the last two regular figures in the wave, Jemm, Son of Saturn & the New Teen Titan Raven. They’re an odd pair, they’ve probably never met before today, but they do have one thing in common. They’re both DCUCs that don’t have double fists. How rare is that?

While I’m a fan of most things DC Comics, I have to admit that the Titans are a weak area for me. When I was a little kid reading comics, I was reading reprints of much older material and when I got older, I started reading the current slate of comics. This left a gap in my comic awareness and it’s a gap that fits the Titans squarely. Even though I haven’t read a lot of Teen Titans stories, I do know the basics. Raven first appeared seeking a group of heroes that would help her fight off her father, the inter-dimensional demon, Trigon. After being rebuffed by the Justice League, she reformed the Titans as the New Teen Titans. A team that she would end up as a recurring member of through a couple deaths and rebirths. A creation of Wolfman & Perez, Raven was of the main stars in the NTT title during its best years in the 80s. 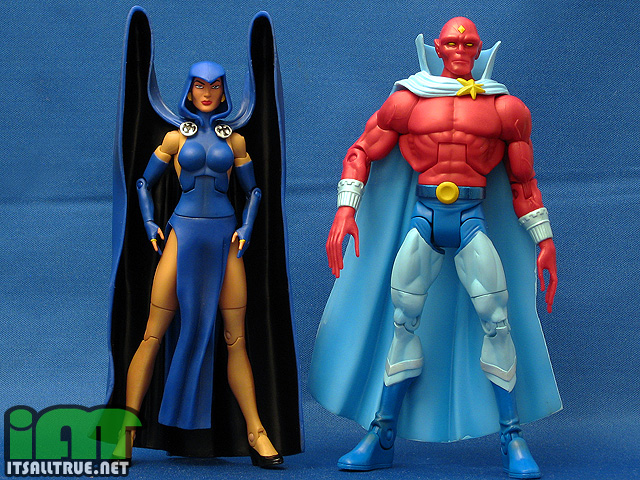 Raven features quite a few new pieces despite her simple appearance. I’m happy with the figure, but there are a couple parts of the figure I don’t like so let me get the negatives out of the way first. One, and this could be just me, I’m not in love with her cape. I think it looks great flaring up on the printed page, but it doesn’t translate well into three dimensions. I didn’t like it when DC Direct chose it for their figure and I don’t like it here. I understand the design choice – it’s dynamic – but I was hoping they wouldn’t go this route beforehand and I haven’t been convinced to change my opinion seeing the final product. 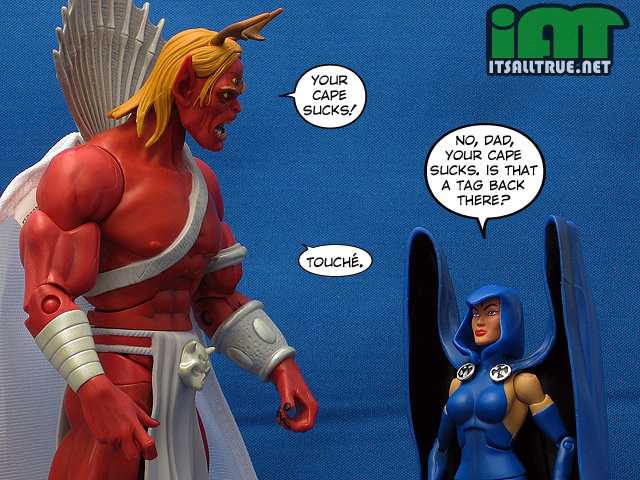 Second, Raven is sorta the anti-Starfire when it comes to her torso piece. I’ve long been annoyed with the Starfire figure. I think she’s one of the worst DCUCs and it’s largely because her uni-boob. Her chest is largely uncovered in her costume, but Mattel opted to use a torso from a clothed figure leaving Starfire just odd and misshapen. Raven has the opposite problem – her torso features a defined chest with two separate breasts, making her dress look painted on. I suppose this isn’t a big problem, but, since she’s going next to Starfire on my shelf, it bugs me to see them together. Plus, this torso is new. It features some serious kibble on the back to accommodate that cape, so, other than a prepaint, I don’t understand why it had to be done this way. 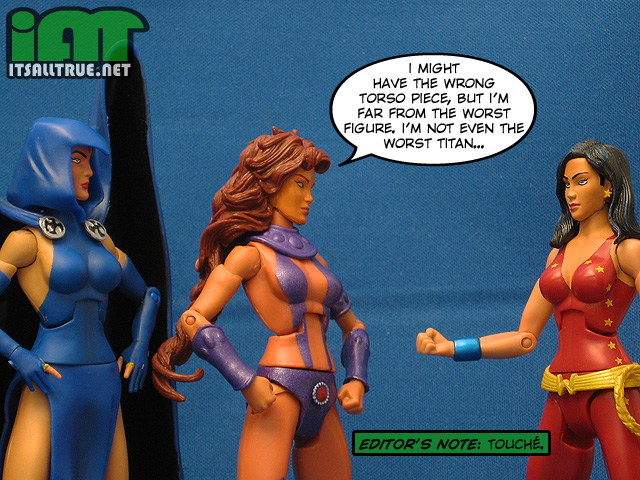 Those two things aside, Raven has some great notable areas as well. The cape is well done even if it looks silly to me. The head sculpt is great and the hood had been done in a convincing way that it looks like part of the cape from most angles. The arms are thankfully beefier than the normal fare and, even nicer, feature a raised sculpt for her gloves. This combined with the new skirt piece really give the figure some depth and help her to pop on the shelf. 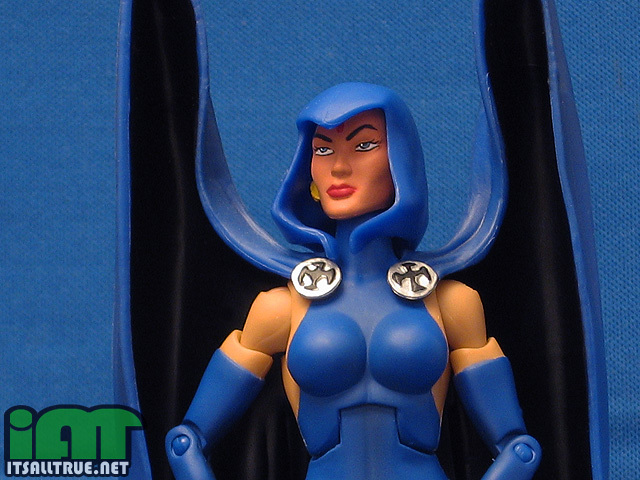 Raven didn’t need a lot of paint to get things right, most pieces were molded in blue or flesh tone and then lightly airbrushed. The few painted areas are sharp including the smaller paint apps like the rings and earrings.

Articulation is standard the line. I had guessed there would be some limitations to the head because of the hood, but I was happy to find that most of the range was intact. Like most of the girls, Raven does have a limited ab-crunch, but here other points work as expected.

I didn’t have any real quality control issues with Raven. Her right eye is a tad smaller than her left, but it feels like a nitpicky complaint. Her cape and skirt are both made out of the softer plastic we’re seeing with the capes in this wave while her legs and arms are pretty solid, closer to Katma Tui in DCUC11 than Donna in DCUC13. 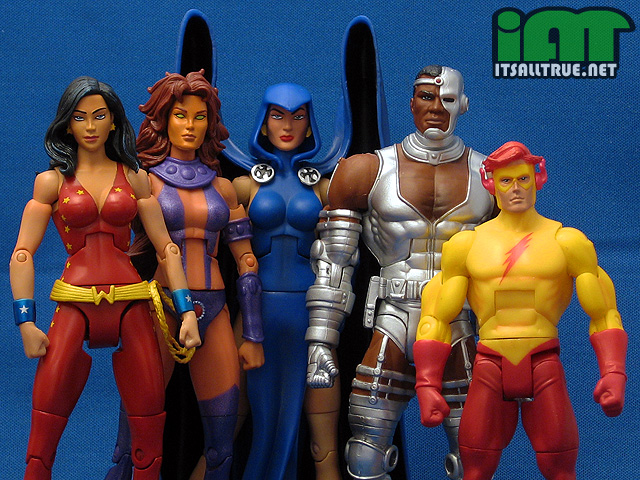 Anyway, I’m not the world’s biggest Titans fan, but I am familiar enough with the characters to know this Raven is a great representation of the character. There are a few things I’d like to change like getting rid of the flaring cape and adding some detail to the torso like raised edges and giving it a more clothing-like appearance, but that aside I’m happy to have Raven on my shelves. But having there is another reminder that Mattel needs to sort out which version of the Titans they’re trying to finish. Continue to Jemm…