It’s finally time to cap off our DC Classics Wave Thirteen reviews with the C&C himself: Trigon. Upfront, I should admit I’m not his biggest fan, but that’s probably more about my lack of familiarity with him than it is the character himself. It helps that he ended up with a nice C&C with just one unfortunate drawback.

When I was a wee tot, older comics were one of the things I used to learn to read. The DC Special Blue Ribbon Digest & Best of DC Blue Ribbon Digest in particular. Those digests formed my early understanding of DC Comics. Zatanna, the Seven Soldiers, the Doom Patrol, Superman Red & Blue, “The Curse of Crime Alley”, Jonah Hex, Dark Mansions of Forbidden Love, “The Hockey Mask of Death”, “Man with the Golden Gloves”. Uh, yeah… in that light, it shouldn’t be any wonder that my comics love is skewed towards the strange and wonderful world of lesser known stories. That’s what happens when you first exposure to Uncle Sam is while he’s umpiring a baseball game between super-heroes and super-villains. Anyway, I’m telling you all this because in my youth I was reading older stories and as I got older, I read current stories. Trigon got lost in the middle. And in all my “studies” I’ve never gone back to read New Teen Titans. That makes Trigon the first DC Classics I’ve reviewed that I’m not really familiar with. It feels weird. I feel like I need to rush down to the comic shop and pick up some NTT backissues right now. 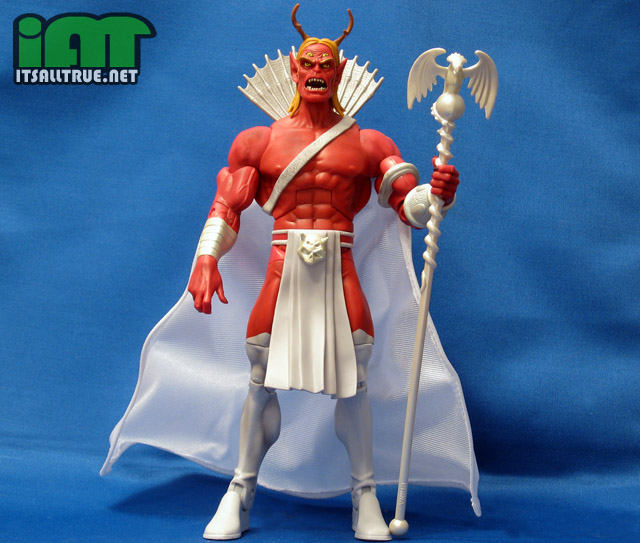 I still know the basics of Trigon enough to tell you about him though. It’s fairly simple. He’s the creation of Wolfman & Perez in the aforementioned New Teen Titans. He’s a particularly nasty demon from another dimension; son of a human woman and a god who wanted to pour his people’s negative energies into one being and then vanquish it. What a crappy Dad, huh? Anyway, the plan went awry and Trigon lived on as a new powerhouse of evil that conquered millions of worlds and still found time to mate with a human woman. This pairing would produce the Titan Raven. It was Raven who, after being rebuffed by Zatanna & the JLA, reformed the Titans to stop Trigon from conquering Earth. They stopped him that first time, but he would clash with Raven and Titans a few more times over the years. The only Trigon story I’ve read first hand was in a recent story arc in Booster Gold. In that issue, Dick Grayson had been killed years in the past and Trigon was now the ruler of Earth. Luthor bided his time and worked for him (as much as Luthor works for anyone) while a few underground heroes eluded him, notably a non-GL Kyle Rayner & his wife, Zatanna. It was a pretty cool story and Trigon was badass in that brief appearance. 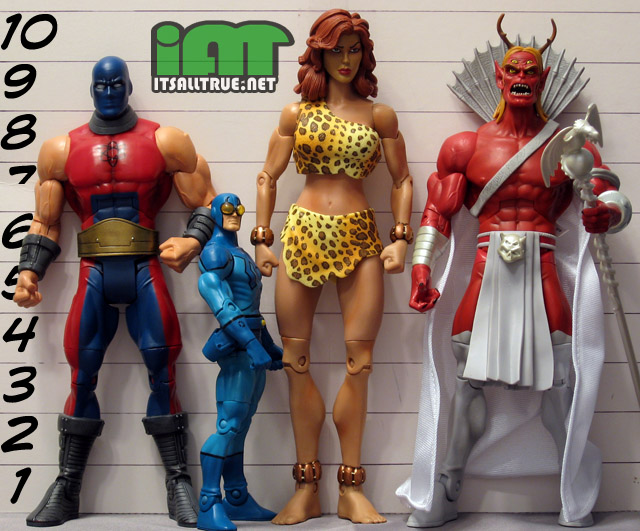 It looks like Trigon probably has a little bit of Atom-Smasher in him, but there are definitely plenty of new parts to make Trigon unique. Trigon has new, plain calves & feet, a belt/loincloth, both hands, both forearms, a left bicep, the upper torso, his head dress, and his trademarked four-eyed head. With the exception of the legs/boots, all of Trigon’s details are sculpted; making for an impressive figure. The small skull on his loincloth is a little misaligned, but it’s a nice separate pearlized piece and it stands out nicely from flat white behind it.

The head sculpt is dynamic this time around with Trigon expressing some pent up rage. I think he looks best when the upper eyes are looking directly at you or when he’s looking up. The upper eyes are a bit disconcerting, but I think that’s more about the fact that he has four eyes than the sculpt itself. 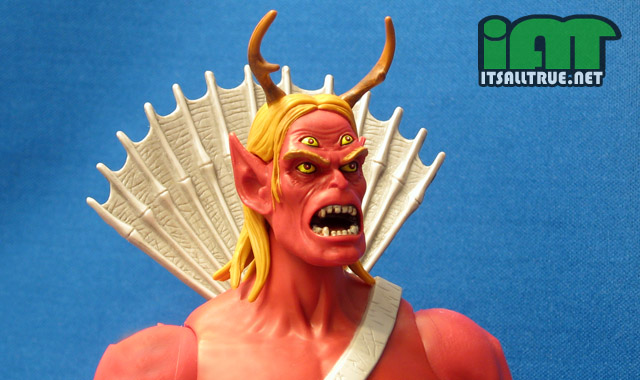 As much as I like the figure, there is one thing about him that I absolutely, positively hate. The cloth cape. I don’t know if the cape, as sculpted, was too big to fit into a package. I don’t know if it didn’t cost out. I don’t know what went wrong, but this guy had a nice plastic cape when we saw his 2up and now he’s got this junky shiny fabric thing. I promise that I’m not wholly against cloth capes, but I am when every other cape in the line is plastic. I loathe inconsistency! And this cape stands out unnecessarily. It just looks off and that’s without mentioning the giant tag coming out of it his back. The cape does feature “plastic coated wire stiffeners” which allow for some posing, but they’re not attached to anything and the cape can’t hold that many great poses. It really annoys me. Continue to Articulation, Accessories, & the Summation…