Our fourth DC Universe Classics Wave 15 Review focuses on Golden Pharaoh and Sinestro Corps Batman. These two are alike in that neither has a true spot in the DC Universe, but their translation into DC Classics is a tale of two toys. One a fantastic update and the other an odd addition.

As usual, I like to start off with a brief bio about the character. Two problems. One, it’s Batman and I think we all know that one by now… Family Tragedy. Solemn Vow. Intense Training. Dark Knight. Second, this version of Batman doesn’t exist in the comics. In an early issue of Green Lantern v4, Batman is selected (& rejected) by a yellow ring, but that gives Batman a rookie (black & blue) Sinestro uniform for all of 10 seconds and not the one depicted here. Mattel has teased that it’s possibly part of an upcoming storyline, but the figure’s bio was of little help in sorting things out. 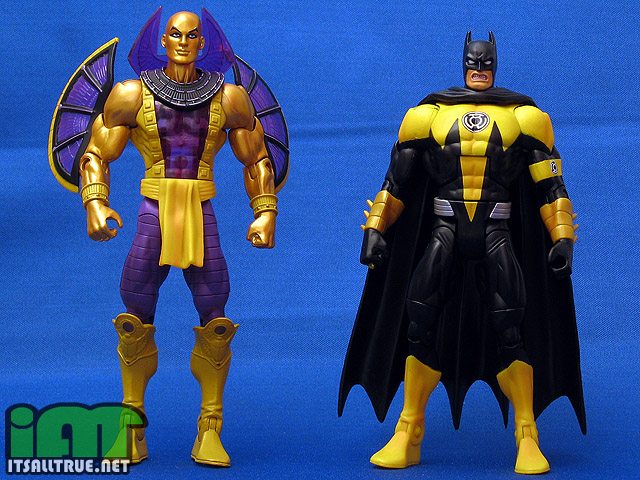 Regardless of his origins, it’s not that complicated a concept – “what if Batman were part of the Sinestro Corps?” Woo-hoo. I’ll try and temper my enthusiasm. If you don’t want to hear me complain about Batman, you can always skip ahead to Golden Pharaoh.

Batman is mostly the Batman figure that we’ve all come to know and love in a variety of gray & blacks with that one blue one that one time. He does feature a different lower torso than normal since he’s sporting a one-piece jumpsuit instead of his usual undies-on-the-outside costume and he borrowed Hal’s hand for the ring. He also has the standard issue Sinestro Corps belt, new forearms with SC bands plus his trademark scallops, and a new head. 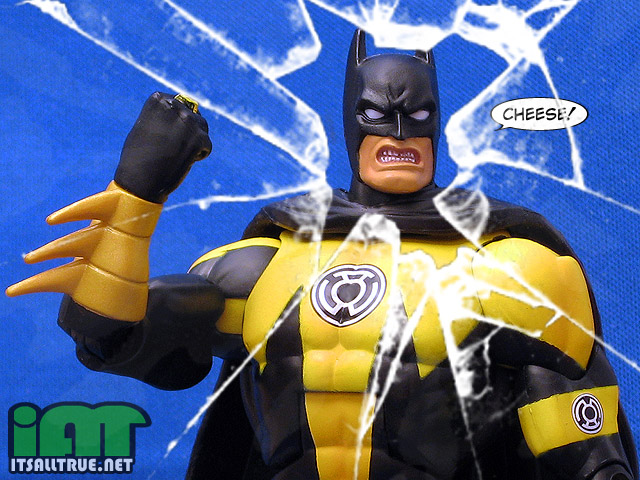 The head is really the main new piece on the figure and I’m not sure what I think about it. It’s kinda angry. It’s snarling after a fashion. I kinda see it as a “Frank Miller” G-D Batman head. It’s nice that they gave him some new pieces, but I’m so cold on the figure I don’t think I would’ve been complaining if they did it. Still! I’d be outright wrong to complain about new pieces, so I’m not going to. Better three than none.

Paint is another issue for this figure. I don’t know the first thing about making toys, but in my experience, there should be a number somewhere – that works across continents and companies – that is the numerical equivalent of what color should be used to make Sinestro Corps figures. Since Sinestro, the Matty Corps 2pk, and Batman are in different shades, that’s clearly not being used. I’m not sure which I’d say is most accurate, but I like the Tomar Tu shade best. Sinestro is a bit orange and Batman is a little too neon. 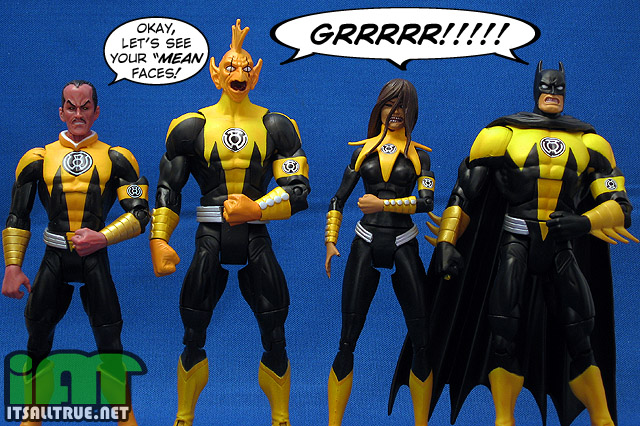 To aid him in his mismatched colors, are his boots which are molded in yet another shade of yellow and are brighter than the rest of his uniform. I do have to say that the paint overall is typically crisp, which says something considering a lot of it is yellow on black. The difficult details on his snarling expression are similarly well done. His ring is just, well… slathered on his hand in the general ring area. He also loses a few more points for the Sinestro Corps symbol on his armband being upside-down.

Articulation is standard for a Batman DCUC figure. All the joints are there and have good range, though the cape does get in the way in some deeper poses. The head has some down movement and a slight tilt. 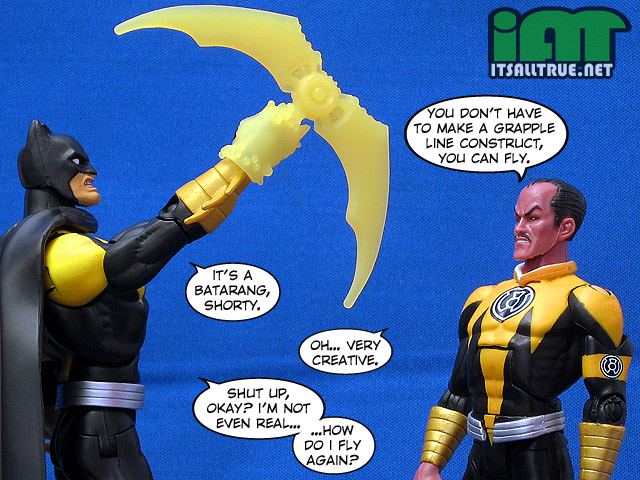 Batman includes one accessory, a yellow construct batarang. The sculpt is good, a larger version of the batarang the 4H have made for the DCUC line, but it seems a bit milkier than it should be. In Mattel’s defense, the green constructs weren’t clear and I didn’t give them any gruff in my DCUC 11 reviews. Those looked okay to me, this one just doesn’t. It may be that the yellow doesn’t translate well into this form or that the hue is off. It also doesn’t match the color of the “Fathers One” construct that came with Karu-Sil. As I have pointed out in a few of my GL reviews, it’s important that Mattel get the consistency right for the uniforms and constructs with the Lantern figures because they are uniforms and use the same basic energy (albeit in a rainbow of colors). 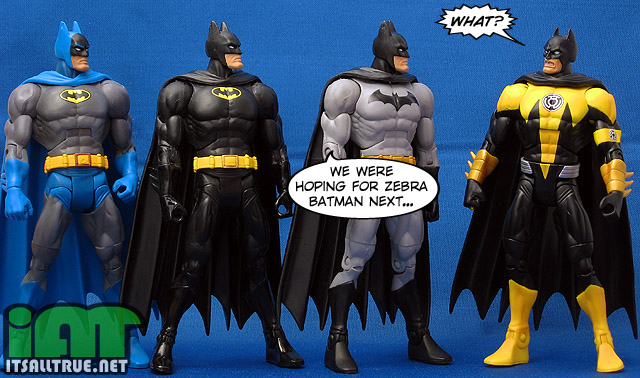 Ultimately, it’s not that bad a figure. It’s fun in its own way and I can’t tell if I don’t like it because a) it’s not executed well with an odd head and mismatched colors or b) because he’s taking up the spot of a figure I would want. I’m not really into “coulda beens”. I don’t care what characters Mattel won’t get to (it’s gonna happen, we’re gonna have to deal with it). But, at the same time, I can’t help but look at Sinestro Corp Batman that way a little bit. Until something happens at DC, he’s a made up guy and I’m not interested in that with this line. Plus, I really want Zebra Batman. Really. Continue to Golden Pharaoh…