Even with being a lifelong DC Comics reader, there are portions of the DC Universe that I haven’t had time or, at least, made a point to get to. The Legion of Super-Heroes is one of those areas. I know the basics, the characters, the history, but I can’t say I’ve ever read a Legion comic that featured Tyr.

Comicvine shows that Tyr has appeared in 21 issues and I’d believe it since I’ve never seen him outside of his appearances in Super Powers Vol. 3. In those issues, I don’t recall them ever mentioning his Legion status or even that he was from the future. As a kid, I just treated him like he was a New God. It wasn’t until I got older that I learned he was a Legion villain created by Dave Cockrum shortly before leaving DC Comics for Marvel* and going on to revitalize the X-Men franchise along with Len Wein.

* – Did you know that the X-Men’s Nightcrawler was originally intended to be a DC character? Check it out. 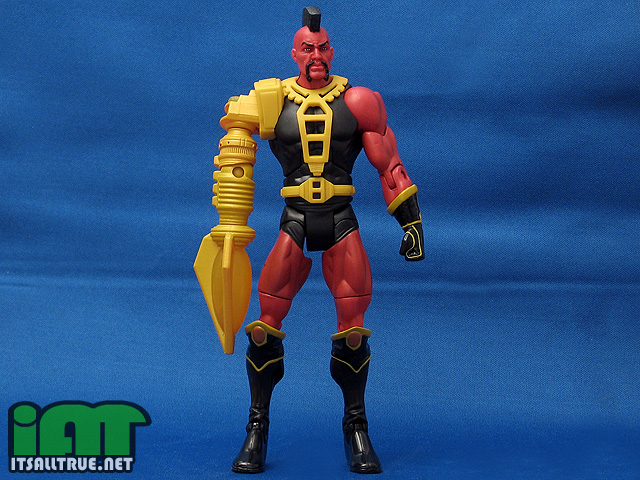 Tyr is a warlord from Tyrraz (I know, I know…) that first came into contact with the Legion when he brainwashed Timber Wolf to kill the Legion. He’d basically gotten to be so badass in his own galaxy that he had to move on to new galaxies if he wanted to get any badassier. And what makes him so badass? Three words. Sentient Gun Arm. In his old SP bio, the gun arm was said to fire enery bolts, project force fields, fly around on its own, and subvert the will of anyone that tried to wear it. None of this mattered to my six year old self. You squeezed Tyr’s legs together and his arm swung up and shot it like a missile. It was awesome. And hey, I’ll admit it, it still is kinda awesome. 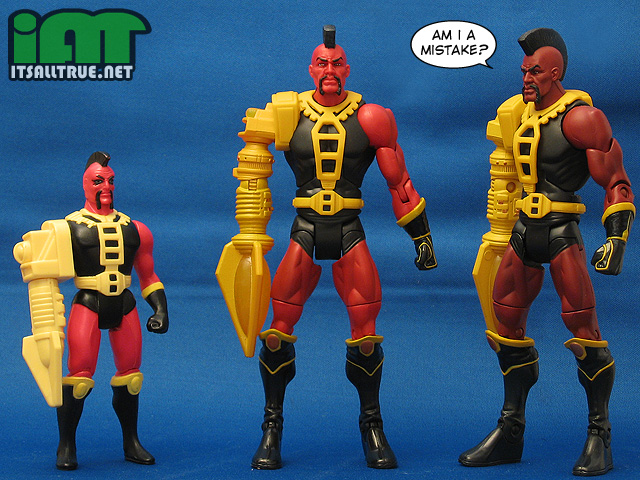 Before we get into any nitty-gritty here, I need to point out that not all Tyrs are equal. The original Super Powers figure was rather bright red. The DCUC Tyr on the right there is mine. When I picked him up weekend before last, I just assumed they had toned down his color to be more like the comics or just more “realistic” overall. When I was at Vault’s house later in the week, I saw his… a bright red Tyr. Now, judging from the foot stamps, my dark Tyr is about three months older and appears to come from a different factory than does Vault’s bright Tyr. I’m guessing that gap and factory switch might have something to do with the delay in DCUC14, but we’ll never know for sure. I don’t know which is more rare, but with mine being older and a different factory from the rest of the wave, I imagine bright red is going to win out over time.

Even though he’s technically inaccurate to the SP figure, I kinda like my dark Tyr. If I run across a brighter one, I might still buy it to have both. We’ll see. 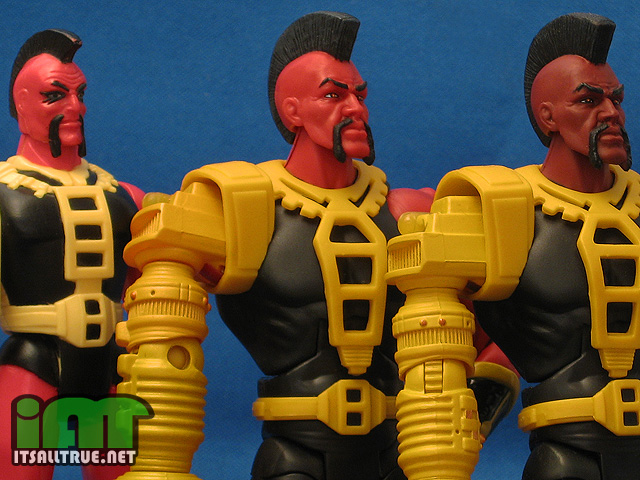 Tyr is a fantastic sculpt. The Four Horsmen have been knocking these lesser known Super Powers homages out of the park and Tyr continues that trend. He’s got new boots, a new gloved left forearm/hand, some softer plastic armor attachments to his upper and lower torso to get his costume details right, and his mohawked head sculpt. All these pieces look great on Tyr, particularly the head sculpt. He’s got a great scowl (that’s brought out better by the darker red plastic) and his signature fu manchu and mohawk look spot-on. The Four Horsemen opted to drop the dramatic mascara the Super Powers figure sported and that’s probably for the best.

Then there’s the sentient gun arm. This thing is exquisite. Not only does it look great, have tons of amped up detail over its Super Powers counterpart, but it’s also well articulated – two ball joints (shoulder & elbow) and two swivel joints (bicep & forearm). This thing can move. The tip and shoulder are cast in a smoky yellow plastic which allows for portions of the arm to be somewhat translucent. Originally, the 4H 2up was shown with a ruby red crystal in the tip, and that looked pretty cool, but I’m glad they went this direction instead. It looks great with the different shades of yellow. 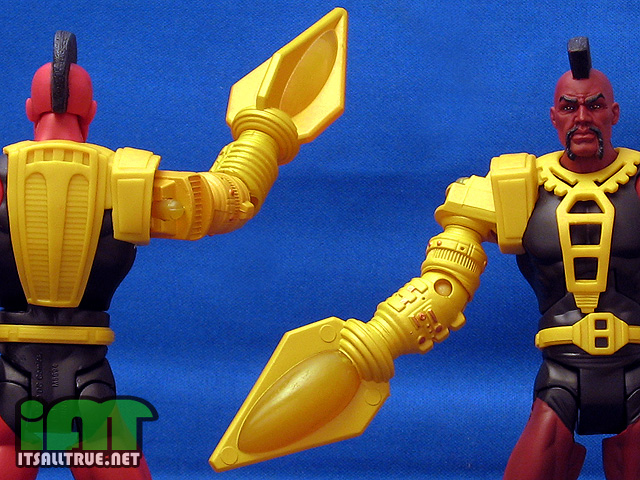 And no, I’m not complaining that Tyr doesn’t have the action feature in the image above. My one lament is simply that it’s not detachable in some fashion. It is supposed to fly around on its own after all. If Tyr were to get caught, he could send his gun arm off to escape, so it could break him out of prison later (if it felt like it). Not this Tyr, that arm isn’t going anywhere without some boiling water or a hair dryer. Boo.

While the arm has extra articulation, the rest of the figure is standard with good range and tight joints all around. His armor has been done in a way that won’t block the ab crunch. There’s a small tab on the upper armor that fits in a slot on the belt to keep the aesthetic right. It almost works. The only issue here is that it’s designed to fit into the slot when his torso is leaned forward instead of in a neutral pose. I know making it fit in the upright position might block some forward movement, but I think it would’ve look better. 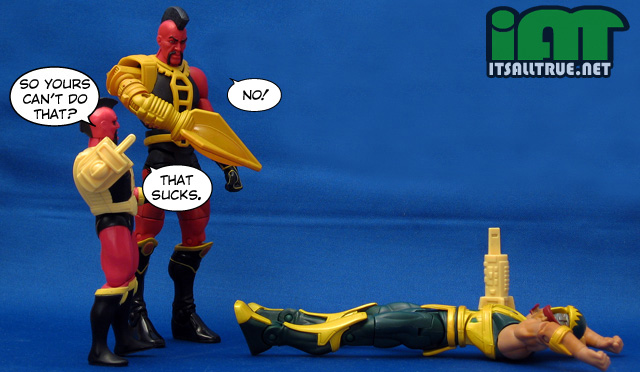 The paint on both mine and Vault’s was fairly free of slop and the mixture of flats, glosses, and metallics really give the appearance of different textures and make the figure pop on the shelf. There weren’t any real quality control issues to speak of other than the warped limbs, both right legs are bowed out a bit thanks to the packaging.

Overall, Tyr is another character that ended up getting a great toy. Sometimes I buy these guys for their value to me as a character or to simply to complete the line, but it’s always nice to pick up a figure that ended up looking great and is a fun toy. Tyr, even with his non-removable arm, is that for me. No, I haven’t had a chance to read any of his continuity appearances. I don’t know much about his personality, but he looks really good on my shelf and he’s got a crazy gun arm. That’s points in my book. 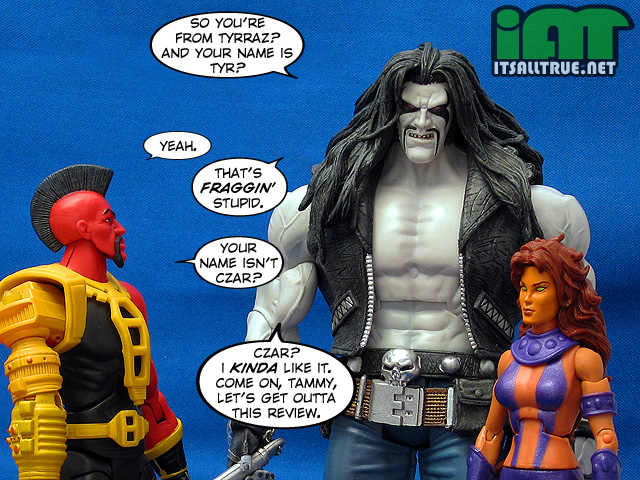