Today, I’m stepping in for Noisy to continue our DC Universe Classics Wave 14 reviews. In the spirit of the greatest Brave and the Bold comics, I’ve decided to throw two characters together that you wouldn’t normally see: Alan Scott, Earth’s Golden Age Green Lantern and Kamandi, the Last Boy on Earth.

Alan Scott debuted in All-American Comics #16, way back in July of 1940. Upon discovering a strange green lantern, he was instructed by the mystical flame inside to fashioning a ring from its metal. But this did more than make Alan the first Green Lantern of Earth. Before this, mystery men like the Crimson Avenger and the Sandman had been fighting criminals and defending the home front with little more than their wit and fists. When Alan donned his brightly colored green and red costume he became the DCU’s first superhero. 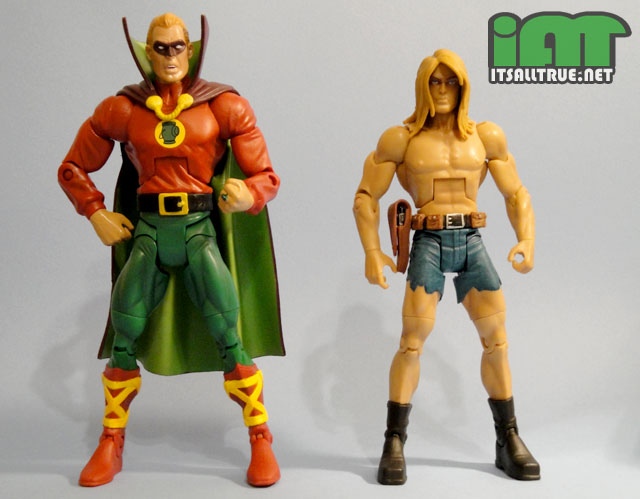 When bigger problems than mere petty criminals arose, Alan joined with other heroes of the Golden Age to form the Justice Society of America. Together they fought Nazis, aliens, and other super criminals. Later in life, Alan would learn that his lantern was actually an object called the Starheart, which was made up of various magical energies that had been captured by the Guardians of the Universe. These magical energies have kept Alan young over the years and made him into what is essentially a living battery. 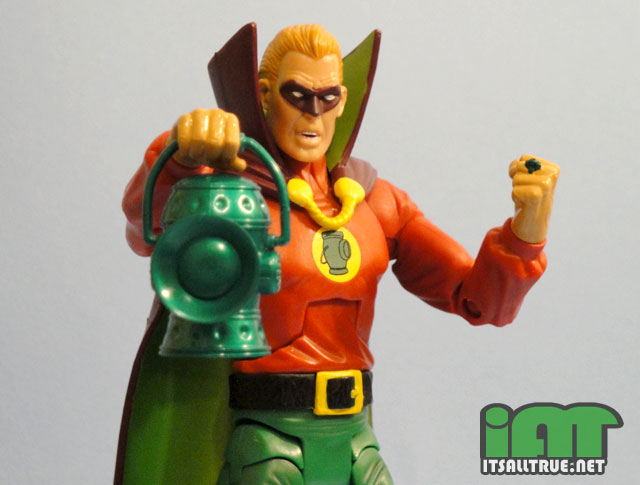 With Alan being part of an older generation of heroes, he doesn’t wear much of that new fangled spandex-tight clothing. So along with the new head, we’ve been treated to some new torso pieces that give him his traditional baggy shirt look along with a sculpted collar behind the cape clasps and poufy sleeves. 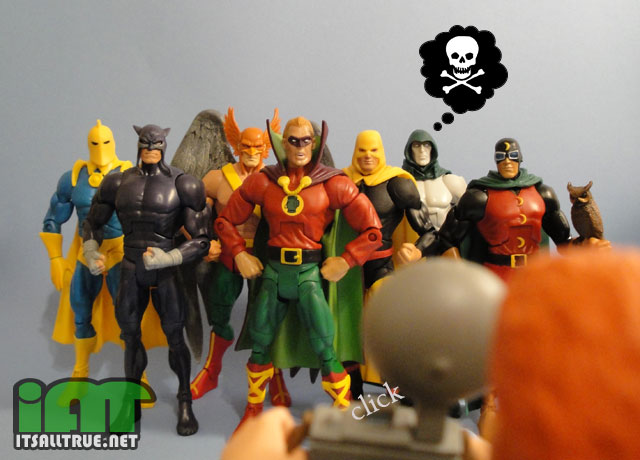 Alan’s left hand is a new sculpt with the classic lantern ring painted in metallic green. The paints a little sloppy around the ring, but not so horrible you’d notice it from a distance. Alan’s right hand is the same sculpt as the original Starman’s, and can hold his Lantern without problem. 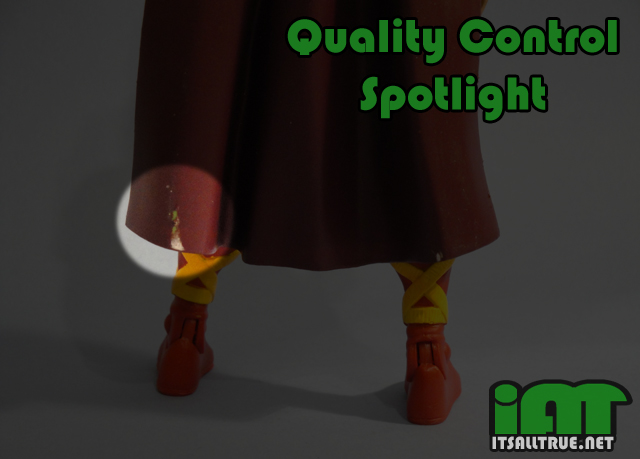 Green Lantern’s shins are also new pieces with textured yellow crisscross patterns. His big buckle belt is a new soft plastic piece, which I’m sure we’ll see again. His cape is also a soft plastic with a nice sculpt, but I had a couple issues with the paint job. His circular clasps are unevenly painted, but the real problem is from the cape sticking to the package. It seems most GL’s were placed in the package before their capes had sufficiently dried and partially bonded with the paper of the card back. When you pull it off, you’ll see paper residue stuck to the back of his cape. And when you try to remove it, the paint will chip and you’ll be left with green spots showing through. 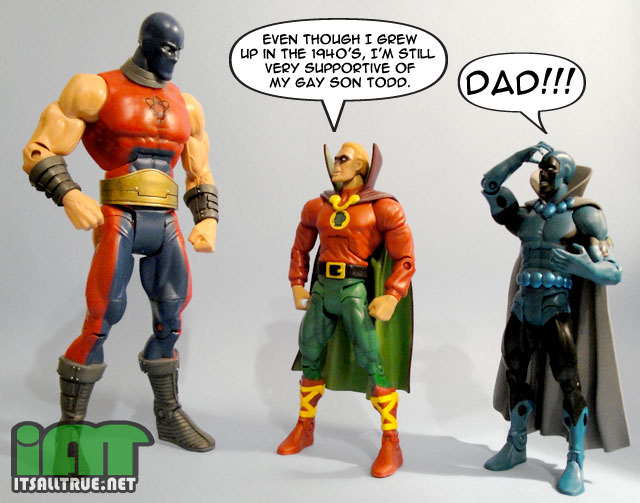 Alan comes with his green lantern as an accessory. It’s nicely sculpted to look like an old timey railroad lantern. I was really impressed by how much detail was put into it. Where the Silver Age Lanterns are somewhat plain, Alan’s is detailed with divots and rivets all around. All the sculpting looks even better with the metallic green paint job that matches his ring. Continue to Kamandi…